Of Moose and Men 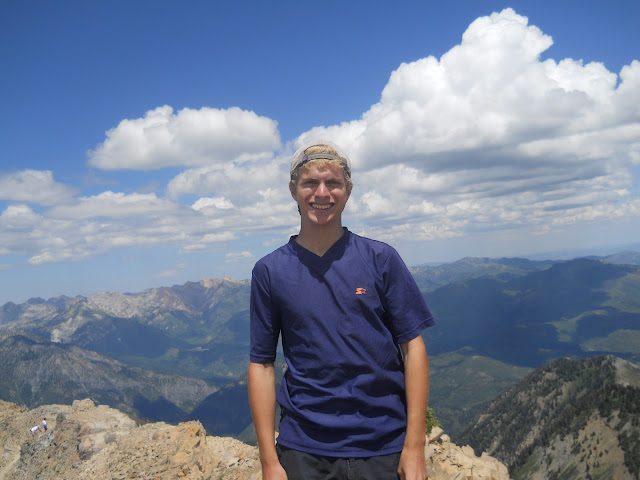 And here's the beast! 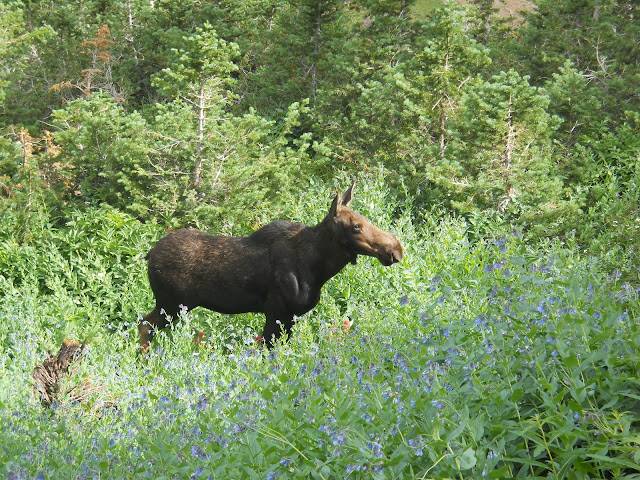 Congrats to any of you who caught the reference. Today's climb was Timpanogos, the second tallest mountain in the Wasatch. Although Mt. Nebo is taller, Timp offers much better views.

The same guy must have designed both the trails up Deseret Peak and Timp. Once again, the mountain was replete with completely unnecessary switchbacks, each of which gained maybe 10 feet of elevation. Consequently, the trail was entirely too long (to the tune of 14+ miles round trip) and gentle. Naturally, a really easy trail with terrific views at the top attracts scads of people; Timp is a local legend and is undoubtedly the most popular hike in Utah. My friend Sid and I spent most our day dodging, passing, and avoiding an almost continuous parade of people going up and down the trail.

At 11,700 feet, Timp is the tallest mountain I've climbed. The trail isn't strenuous at any point, including near the top, so I had no problem at all with the elevation, although I did see several people gasping for breath. The mountain is, however, very dramatic. It's one of 57 mountains in the country classified as "Ultra-prominent" (sticking up really vividly 5000 feet above its surroundings), and it certainly lived up to its name. I saw both the Great Salt Lake and Utah Lake (in Provo) to the west and the Heber valley to the east. It was truly incredible. 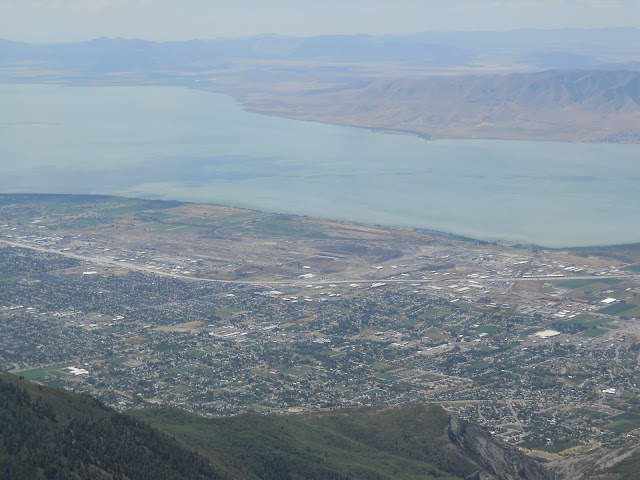 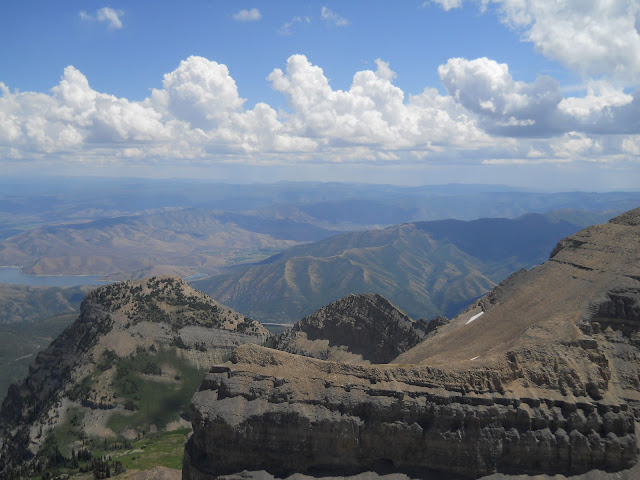 I managed to completely and utterly destroy my shoes today. They've been in terrible shape for a while now, with chunks of rubber falling off and no grip left on the bottom (making it really tough to climb up or down scree; see last week's post). But today was the final blow. I caught the back of the sole of my right shoe on a rock, and it tore the sole off from the foot-enclosure about 2/3 of the way. So for the rest of the way up and the entire way down, i had the sole of my shoe flapping open and closed like a Venus Fly Trap on amphetamines. Those things are going in the trash can as soon as I can convince myself that it's really a necessity to spend $110 on a new pair of Merrells. 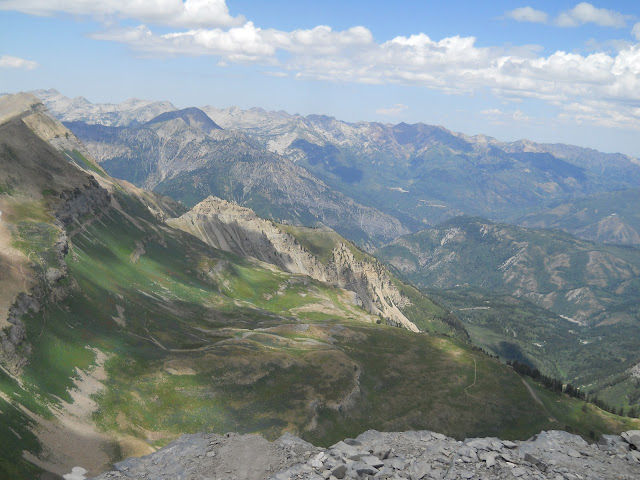 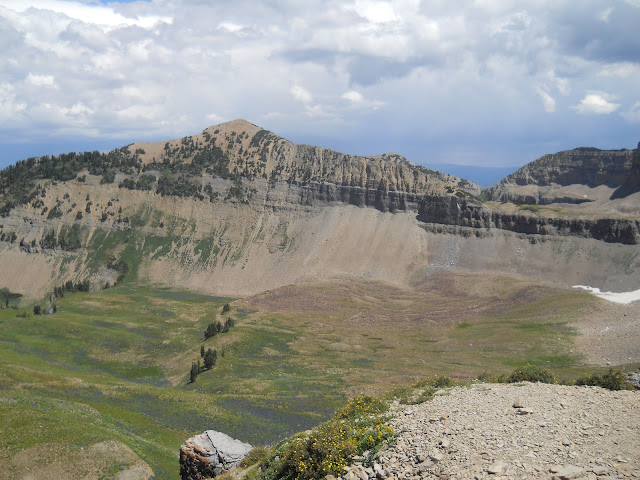 And how could I forget? Your Utterly Impractical Hiking Item Of The Week is...? A high school football team. This is bad news for a couple different reasons
1) The Noise, Noise Noise Noise! What do you expect when you get 40 high school boys together?  It's not like Timp is a place for solitude to begin with, but when you yell across the mountain to each other for two hours about the most inane subjects possible, noise pollution is taken to a whole new level
2) Football players stink at hiking. And it's not just the linemen either. They hiked painfully slow, and rested every 5 minutes near the top. When there's 40 people doing that and blocking the trail, the rest of us get antsy.
Apparently 8-year olds can hike Timp just fine; it's the high schoolers who struggle. To be fair, though, the coach gave us a ride in his pickup from the trailhead to where our car was parked. 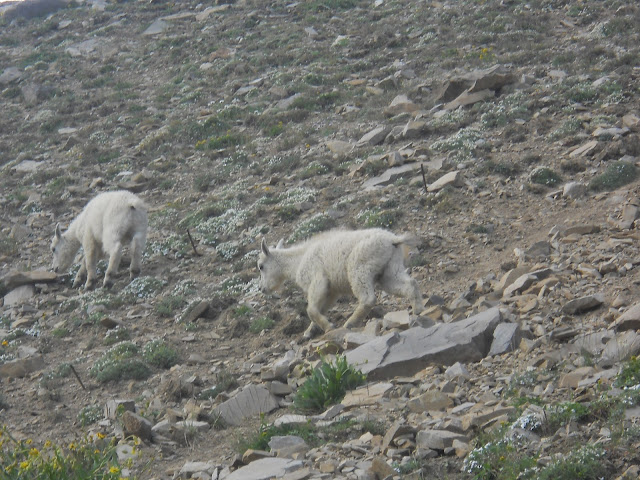 And now for one of the best pictures I've ever taken: 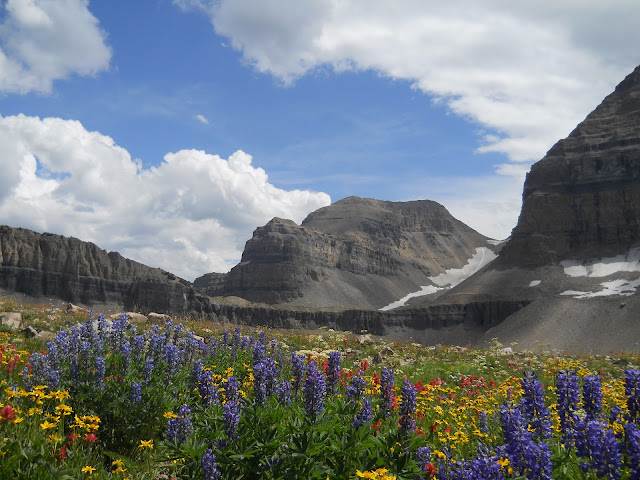 Scree is not your friend

Since I'm sure everyone checks this blog daily just to see if more Pulitzer material gets posted here, I should explain. Two weeks ago the weather was iffy, so I ended up getting a half hour up the trail and it started pouring. Since this blog is already boring and contrived enough, I thought it would be considerate to spare you a post about pretty much nothing.
Last week (7-21-2012),  I had a grand adventure, but then my browser session crashed when I was 80% finished writing my post, and I lost everything because I'm neglectful and didn't save it. The frustrating part is that I can see the draft of the post I wrote, but can't edit or copy-paste it.
Anyways, enough with the meta-blogging. This post is dedicated to the Broads Fork Twin Peaks (now that's a mouthful). The main story of the Twins is scree. In case you don't know what scree is, it's a bunch of loose rock. The Twins consisted of at least 2 miles of nothing but gravelly rock fragments covering smooth stone. The only thing that's harder than climbing up a scree-covered slope without falling to your death is climbing down a scree-covered slope without falling to your death. I'm going to be honest, the hike was a lot of fun, but that section was really nerve-wracking.
The Twins were the tallest mountains I had hiked thus far, but barely. The Pfiefferhorn is 11,326 feet, West Twin is 11,328 feet, and East Twin is 11,330. The funny thing is that when I was standing on the Pfeifferhorn, I saw a pair of peaks (The Twins) that looked way taller than the Pfeifferhorn. But when I stood on the Twins, the Pfeifferhorn looked taller. So either the grass is always greener on the other side of the fence, or the height of the peaks of the Wasatch are determined by the current gas price. 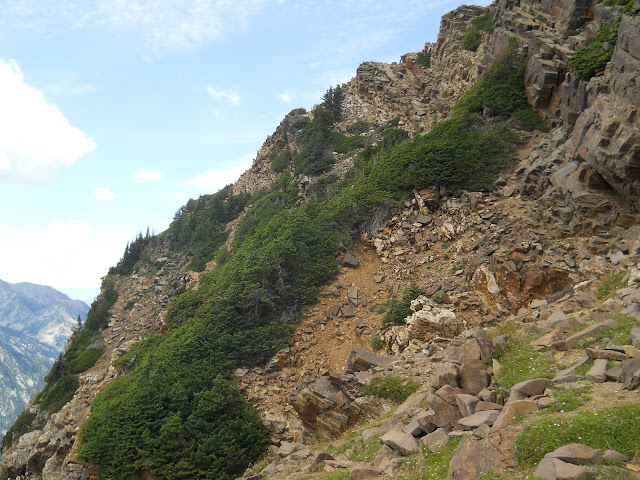 Ah yes, the good parts: The views were tremendous. I could literally see every hike that I had done so far with one turn of the head. Even Deseret Peak was vaguely visible in the distance. The 10 miles were quite difficult (one guy I talked to said this was the hardest hike in the Wasatch in his opinion), but they were well worth it. I'm lazy and don't want to type out a really long description, so I'll let the pictures do the talking. 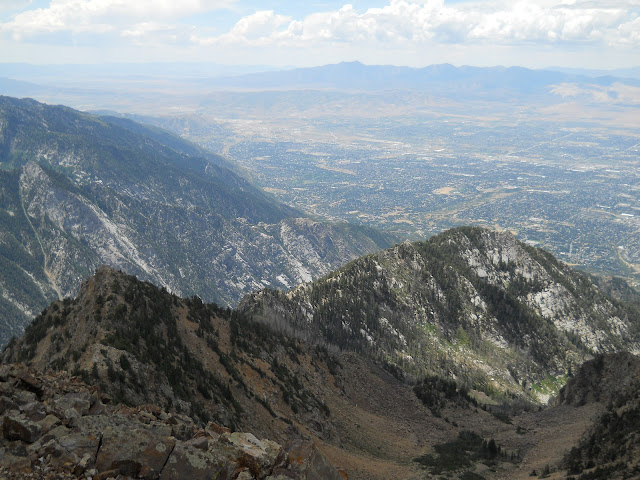 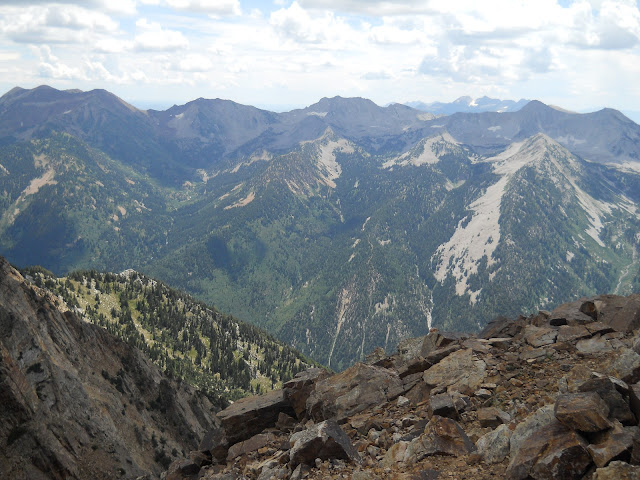 Below: standing on West Twin looking at the East Twin. 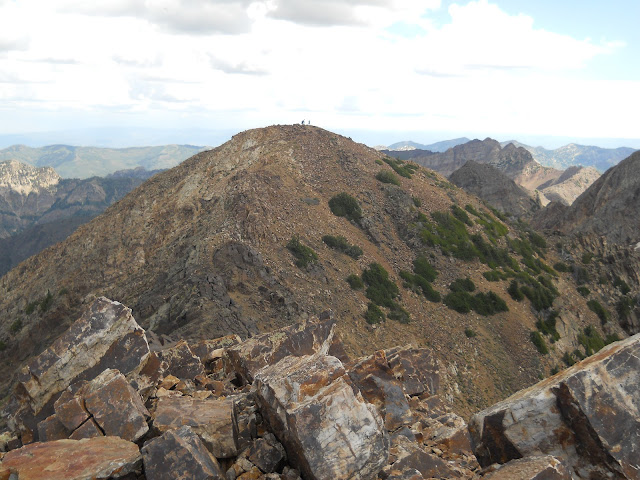 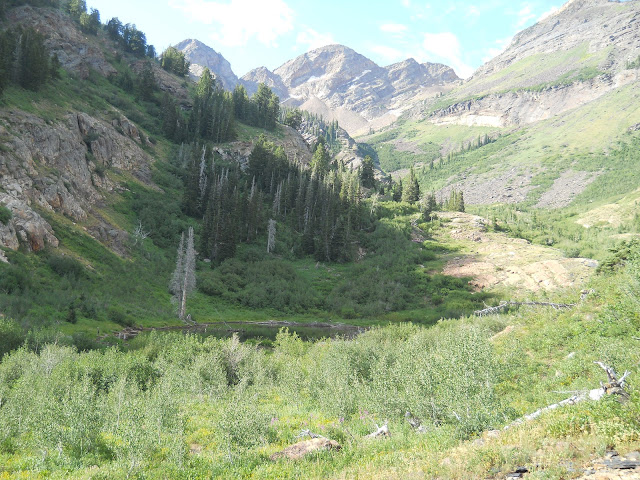 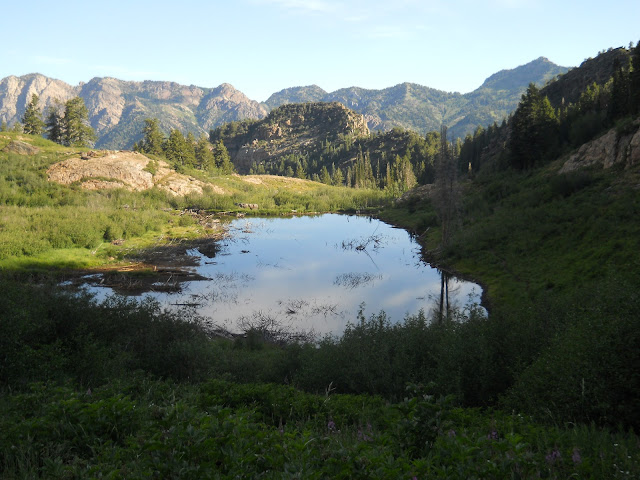 And this week's Utterly Impractical Hiking Item Of The Week is...? Nothing. I only saw probably 5 or 6 people on the entire hike. But although I didn't see something bizarre, I certainly met someone bizarre.
Meet Greaser. Greaser is a very strange yet eccentrically personable older guy. He picks a mountain and hikes it every day for 5 or 6 months at a time. As I was descending the scree slopes, he was huffing and puffing up with an ancient metal-framed backpack that probably weighed 10 pounds empty and doubled as a lightning rod. After greeting me Tacky-the-Penguin style (complete with a loud nasal "hey there, partner!" and an especially hearty slap on the back), he proceeded to regale me with stories about his close encounters with bears, falls down snowfields, and lightning strikes. I estimate about 10% of it to be actually true, but 100% of it to be highly entertaining. And the kicker? He only refers to himself in the third person.
Greaser: a guy with so much personality, even I couldn't have made him up. 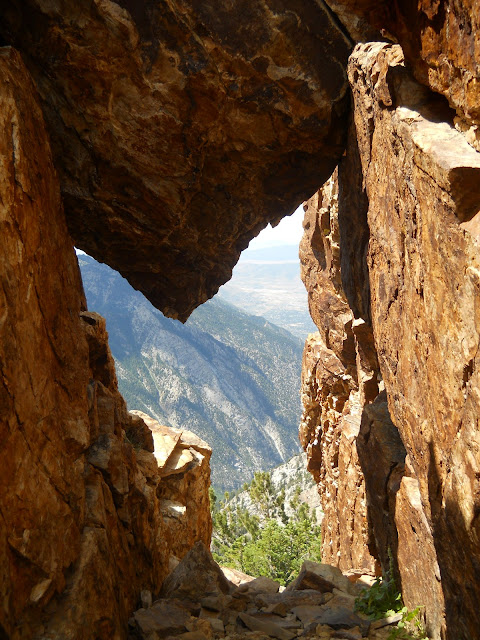 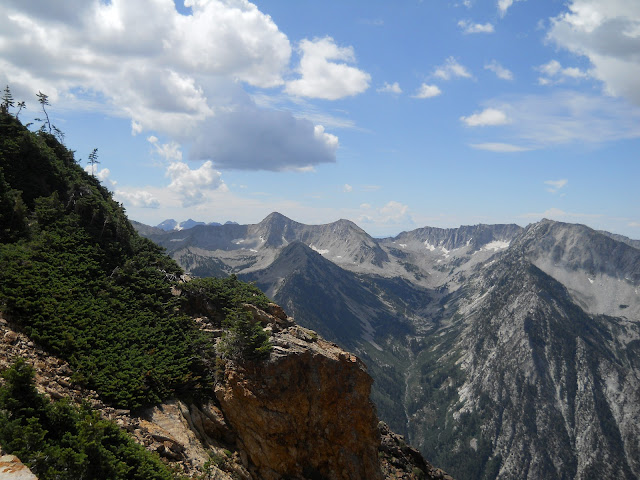 O LORD, our Lord, how majestic is your name in all the earth. You have set your glory above the heavens. From the lips of children and infants you have ordained praise because of your enemies, to silence the foe and the avenger.


When I consider your heavens, the work of your fingers, the moon and the stars, which you have set in place, what is man that you are mindful of him, the son of man that you care for him? You made him a little lower than the heavenly beings and crowned him with glory and honor. You made him ruler over the works of your hands; you put everything under his feet: all flocks and herds, and the beasts of the field, the birds of the air, and the fish of the sea, all that swim the paths of the seas.


O LORD, our Lord, how majestic is your name in all the earth. 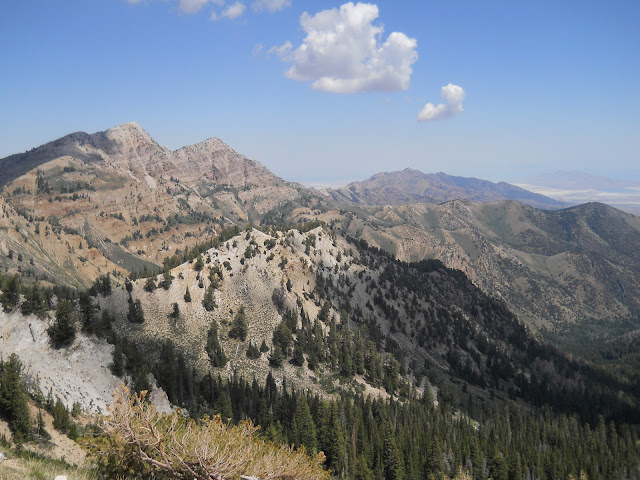 This week's destination was Deseret Peak. Just slightly shorter than the Pfeifferhorn, at 11,031 feet, Deseret Peak features fantastic views. Unlike the other hikes I've done so far, this peak is not in the Wasatch range. Instead, it's part of the Stansbury Range, which is the easternmost mountain chain of the Basin-and-Range physiographic region. What that means, for those of you who don't research geological provinces in your spare time, is that Deseret peak is a lot more isolated than are the peaks in the Wasatch, providing better views. 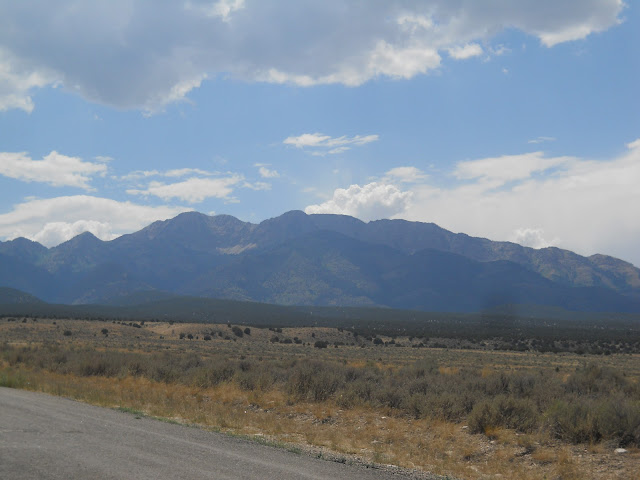 The views are what made this hike worth it; the hike itself wasn't at all challenging. Whoever made the trail must have been paid by the mile. Almost the entire trail consisted of switchbacks, even when they were completely unnecessary. The trail zig-zagged back and forth across a cirque up until it hit a ridgeline. After that, the trail got less insultingly easy; I saw a few "weekend warriors" in their jeans and brand-name polos really gasping for breath as they climbed the ridgeline toward the summit. But overall, it was easy; even at the high altitude I never maxed out my heart rate. 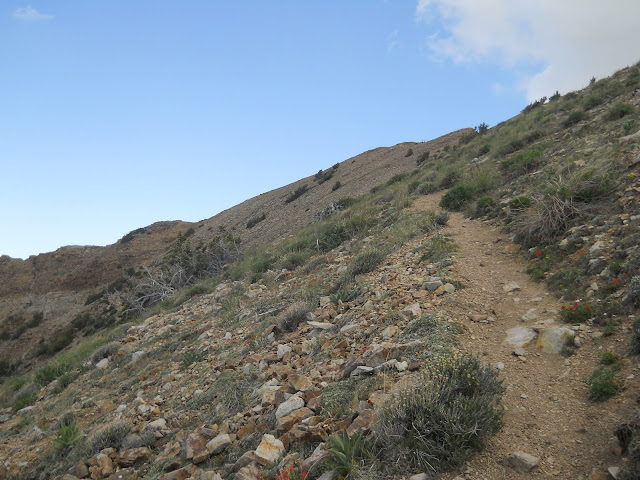 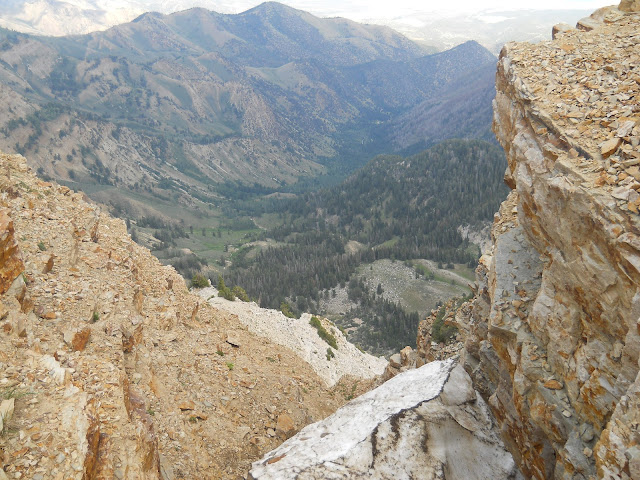 That brings me to this week's Utterly Impractical Hiking Item Of The Week. This week's winner is a pair of horses. You may say, "they sound like very useful Hiking Items". And you'd be right... for the riders at least. For the rest of us, horses are a huge pain in the butt (pun completely intended). You see, horses, unlike dogs, don't wander off the trail to do their duty. And when you think about how big a horse is, and how narrow the trail is... Suffice it to say that I played a lot of hop-scotch. 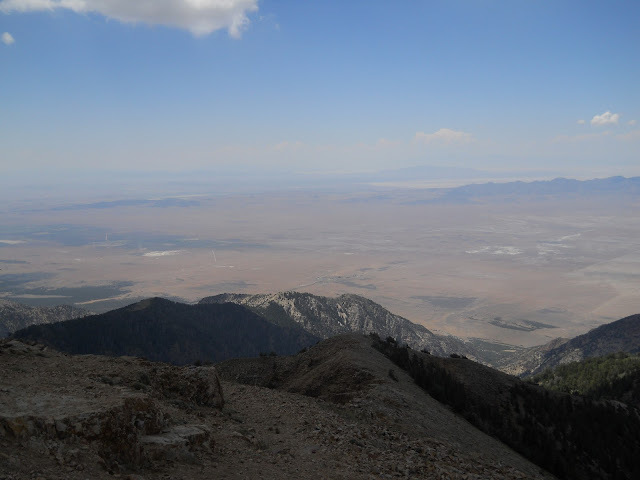 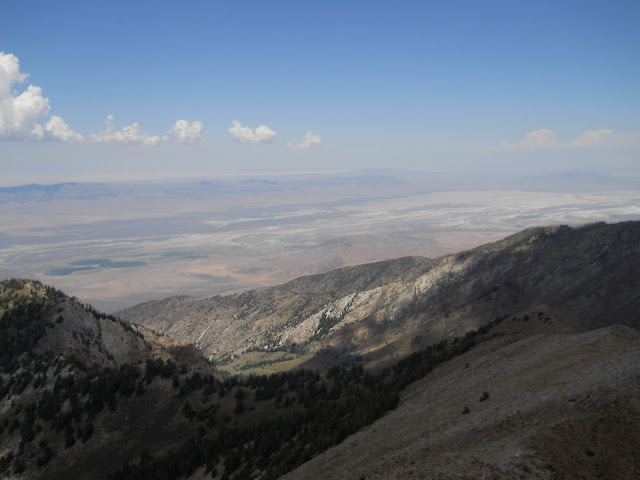 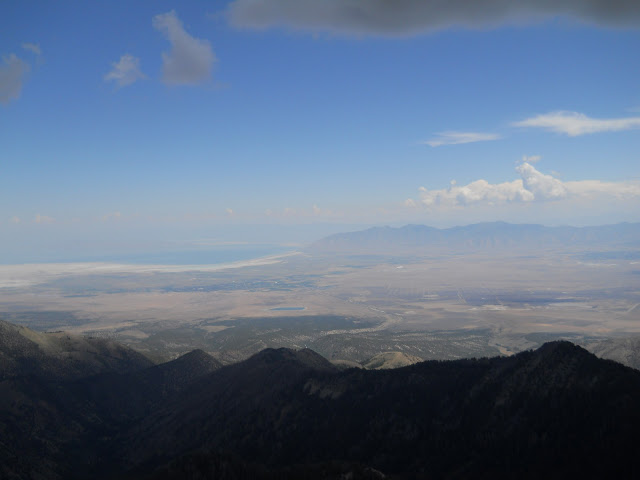 Next week's update should be significant, assuming the weather cooperates. I have a couple ideas rattling around in the old brain. If anyone would like to recommend a hike to me, I'd love to hear it. Just leave it in the comments or email me. 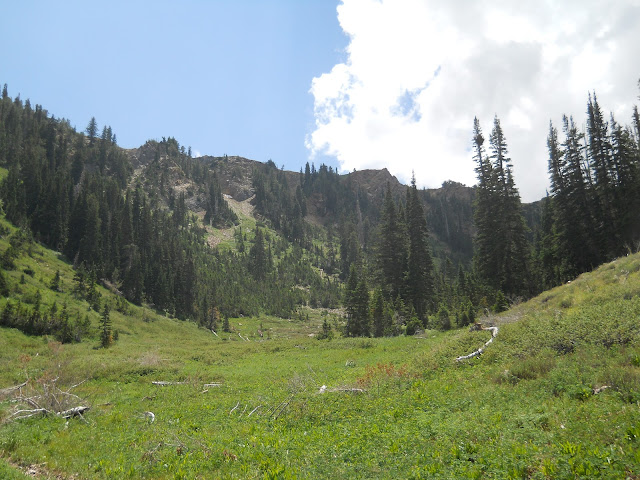