Got a snazzy update for the blogger app on my phone, so I figured I might as well put it to good use. A photo essay, of sorts. Disclaimer: I totally cribbed all of the content of this post from Blue Moon, whose site you should definitely check out.

Me and Blue Moon decided to hit up a sunday buffet. Watch the video before scrolling down.

Food and drink for all :( 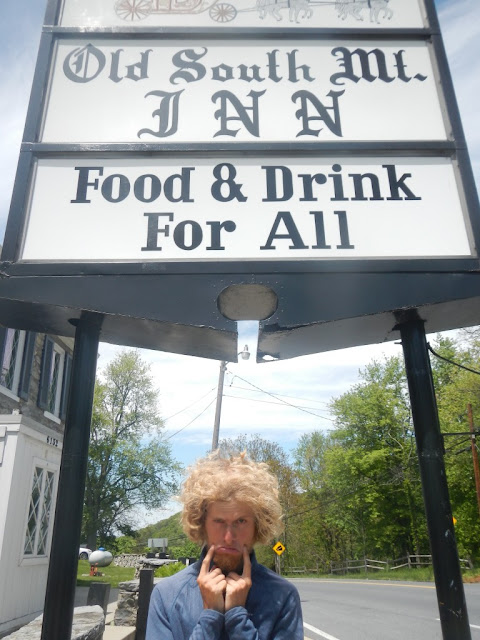 Goal-setting is a funny business. You set a big goal, and begin to work toward it. Each individual step is small, almost inconsequential. What's the significance of hiking 20 miles when it's just 20 out of 2,184? But after time, these insignificant achievements add up to something significant. As I type this, I'm at mile 998.6. Tomorrow morning, I will hit 1,000 miles, followed later in the day by reaching the "psychological halfway point" of the AT, Harpers Ferry, WV. How in the world did I get here, when each day means almost nothing in the grand scheme of things?

As far as I see it, the big achievement is almost less significant than the multitude of little achievements, because the big achievements are merely derivative of the little ones. The real victory of the AT comes not in hitting these milestones, but in daily choices. An example: I bought new shoes in Waynesboro, VA. After breaking them in, I discovered a manufacturing defect in the left shoe that has given me a nasty and excruciating blister-bruise combo on my left heel. And about 10 miles into each day, the temptation to quit early for the day sounds absolutely delightful. But if I make a pattern of getting off my feet until they're comfortable, I'll never get anywhere. The AT is a lot about pain tolerance, and knowing when to listen to your body, and when to grit your teeth and suck it up. These choices are what make 1,000 miles possible.

People often talk about the "Virginia blues". Virginia is a really, really long state. It contains about 550 miles of trail (about a quarter of the entire AT), and I, like most hikers, spent a bit more than a month in the state. After a while, the monotony of travelling in the same state can become oppressive, especially since a good chunk of it is spent walking nondescript ridges. I never got the Virginia blues, however. I found Virginia to be punctuated by a few really delightful sections. One of them was the Dragons Tooth. It's a gigantic rock outcropping atop a mountain that sticks more or less straight up into the air. It's a really fun climb, and blurs the line between a rock scramble and straight-up bouldering (yes, the little nondescript figure at the top is me). You don't get very many of those adrenaline-rushing "oh crap, I'm gonna die! This is awesome!" experiences on the southern half of the AT, but this was definitely one of them. 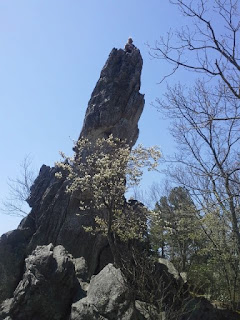 Virginia was also the place where I finally got my trail legs. It had been a source of some annoyance to me that, although I was feeling stronger, I was still plodding along through the southern part of the state. However, around mile 750, I finally started to hum along at a good pace. First I started doing a couple of 20 mile days per week. Then I did a pair of 20s back-to-back. And finally I could do 20s on a daily basis. I went from doing about 100-mile weeks to 115 mile weeks. And when the terrain became easier in Shenandoah National Park, I could do a 130 mile week. The goal isn't to do big miles, of course. I know a lot of people (especially young people) who ramp up the pace to keep up with their friend-groups, and end up with shin splints, tendonitis, or stress fractures. But after a while, an 18 becomes a short day, and you're able to do 20 and still take the time to sit on a rock and admire a view, or to play a 15 minute game of peek-a-boo with a pair of deer.

Anyway, tons of things have happened since I updated last, but I don't possibly have room to describe them all. Also, I'm lazy, and am running out of themes for my ever-expansive blog posts. So I have an assignment for you: if you wouldn't mind, PLEASE leave a comment on the bottom of this post (or shoot me an email/facebook message/text) to let me know what YOU want to know about this here hike. I'd like to make it interesting and relevant to the readers, and to avoid having to come with with good post ideas. I will answer pretty much any question except the following:
Seriously, please post your questions so all my posts aren't as boring as this one is. kthxbai.
Posted by LarryBoy at 6:49 PM 1 comment: