If Upper Muley Twist Canyon was spectacular, Lower Muley was even more so. I met my friend Corona Sam, who had previously secured our permits, down south on Friday night. After camping high on Boulder Mountain, we got an early start Saturday morning, heading south into Lower Muley. 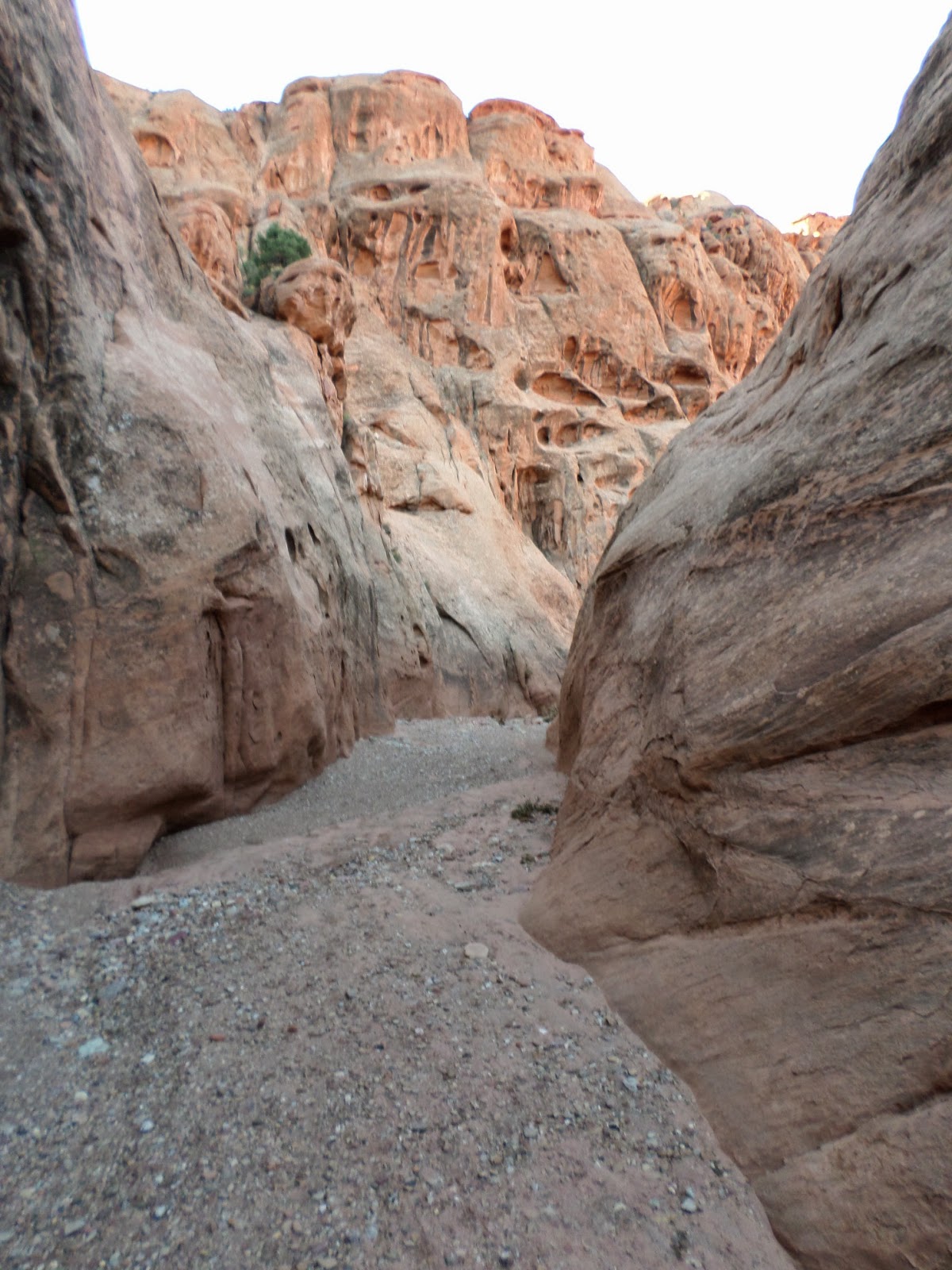 Within a couple of miles, we dropped into a narrows in the canyon, with distinctive red rock. We noticed that the recent heavy rains had left their mark in the canyon - there was fresh debris strewn as high as eight feet above the canyon. But the highlight of Lower Muley is the huge alcoves that water has carved into the sandstone. Some of the alcoves were several hundred feet deep. 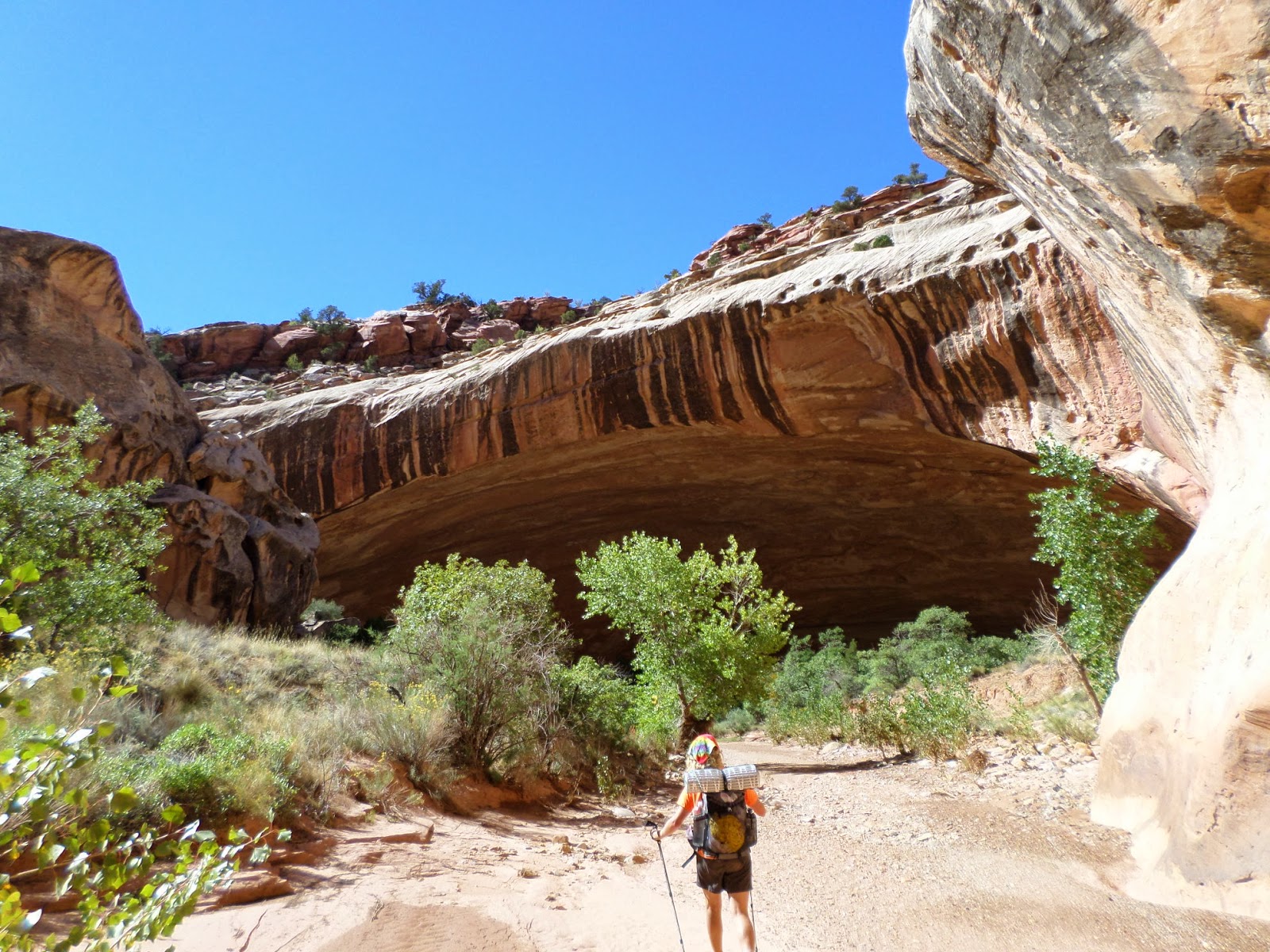 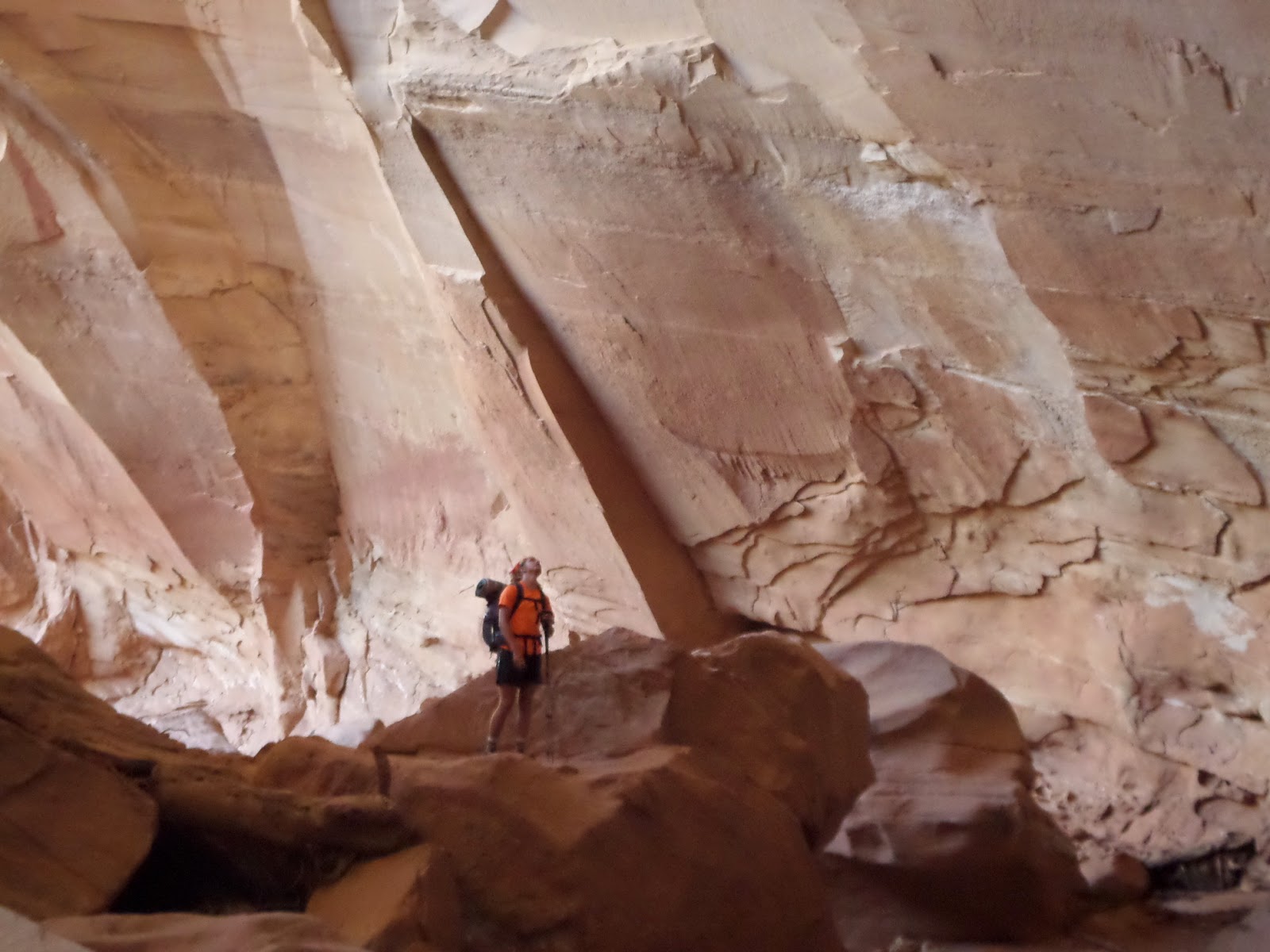 The trail meandered another seven miles south before finally merging with Halls Creek. At that point, we turned north and followed Halls Creek upstream. Of course, the term "creek" doesn't mean that there was any water at all in the drainage. There was, however, a patina of slippery, sticky clay-mud on the creek bottom which was impossible to walk on without skidding. It was a hot hike, in the full sunlight. We camped in a location that's absolutely definitely 100% legal, please don't ask me where.

The next day, Corona roadwalked a few miles (for which I ragged on him mercilessly) back to the car, while I took a supposedly sketchy overland route over the canyon rim and back into Lower Muley. There was a little bit of exposure, but it wasn't so bad... once I found the trail. Of course, the problem was finding the trail. Segue to... 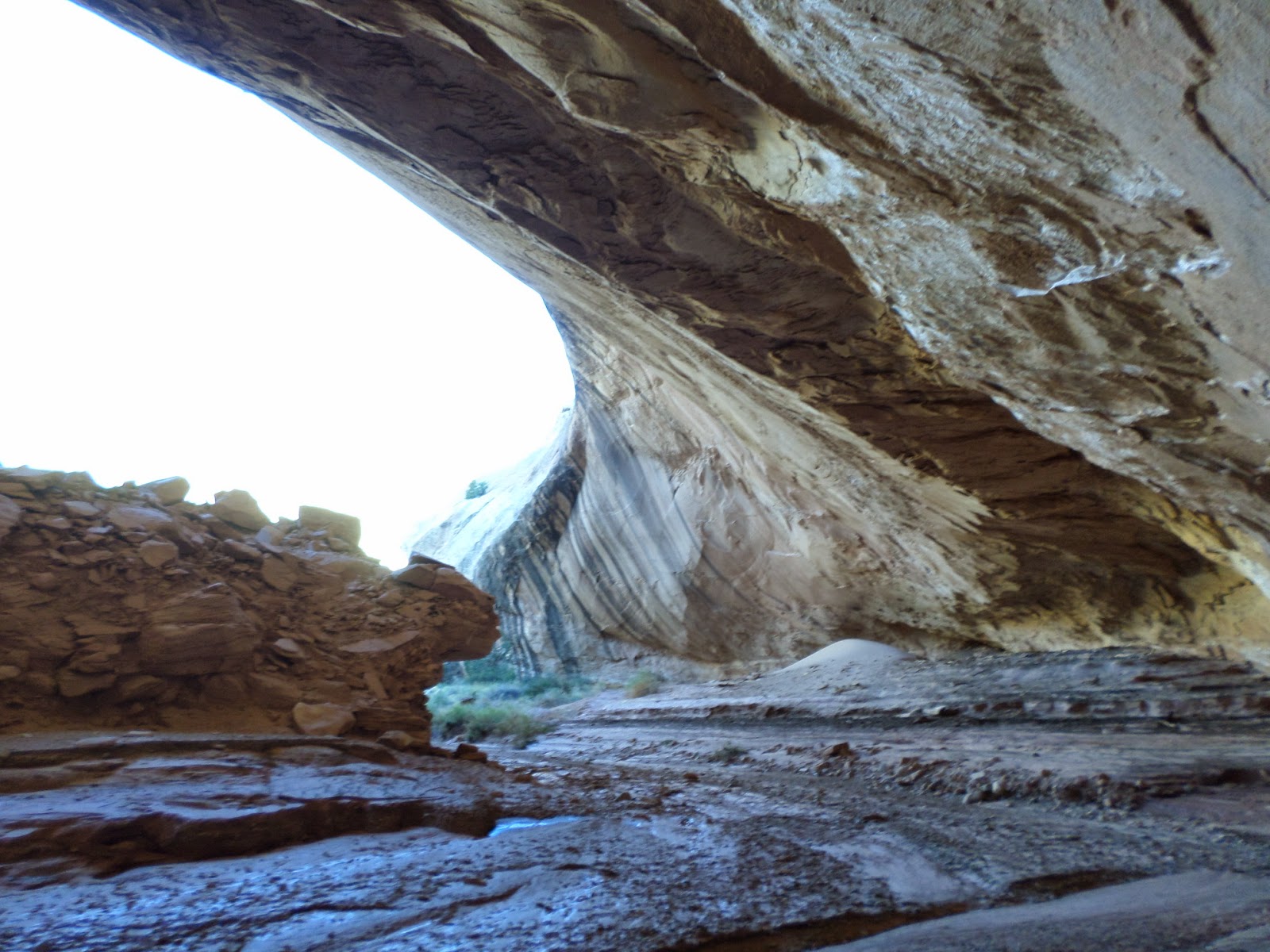 Utterly Impractical Hiking Item of the Week. I've been using a free website (caltopo.com) to create map packs for my hikes. They allow me to carry just the maps I need, and to zoom in to whatever degree is necessary for effective navigation. Save the map packs as PDFs, and print them. On this particular hike, I had a larger-scale overview map, as well as detailed maps covering the entire route...

Except a very small slice. The slice that led from our entirely legal campsite over the rim back into the canyon. The same place I got off-track on, resulting in scrampbling up and down sketchy slickrock, only to get cliffed out after an hour and backtrack to the surely legal campsite to start the whole thing over again. Utterly Impractical Hiking Item goes to me. Sadface. 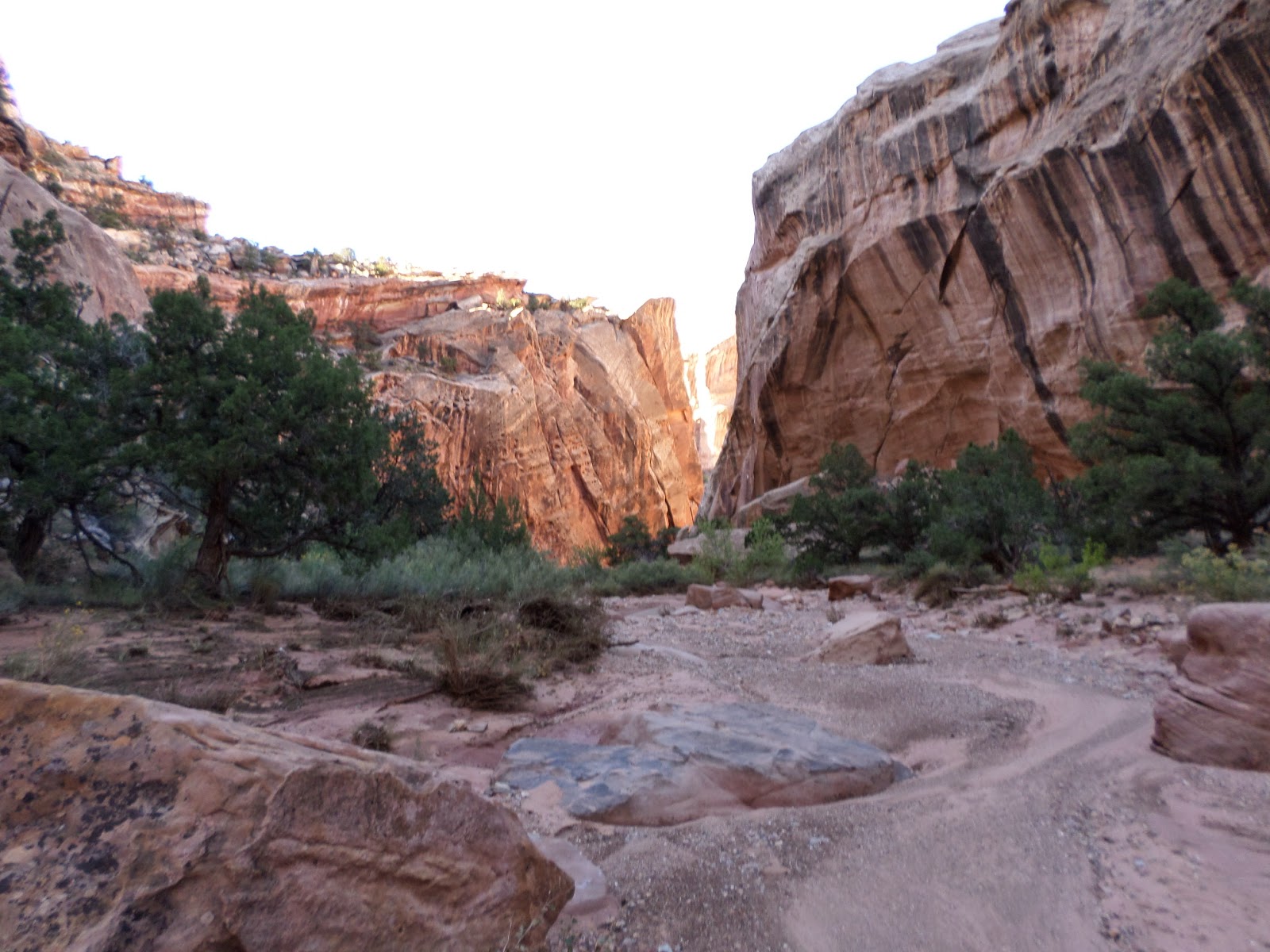 All photos - Tracy Martin
Posted by LarryBoy at 10:31 PM No comments:

In the latter part (haha, get it?) of the 19th century, groups of Mormons were sent out from Salt Lake City to explore and populate remote parts of the greater Utah region. One group was sent to the Four Corners area, in southeastern Utah. In their way was the Waterpocket Fold, a huge ripple in the Earth's crust. The rock layers on the west side of an ancient fault line are several thousand feet above the same rock layers on the eastern side of the fault line. At the eastern edge of the Waterpocket Fold, therefore, is a large vertical escarpment - a significant obstacle to a team of horses, wagons, and settlers.

After much searching, the settlers found a way to descend the east side of the Waterpocket Fold - through a skinny, winding canyon. They named it Muley Twist Canyon - a canyon narrow enough "to twist a mule". 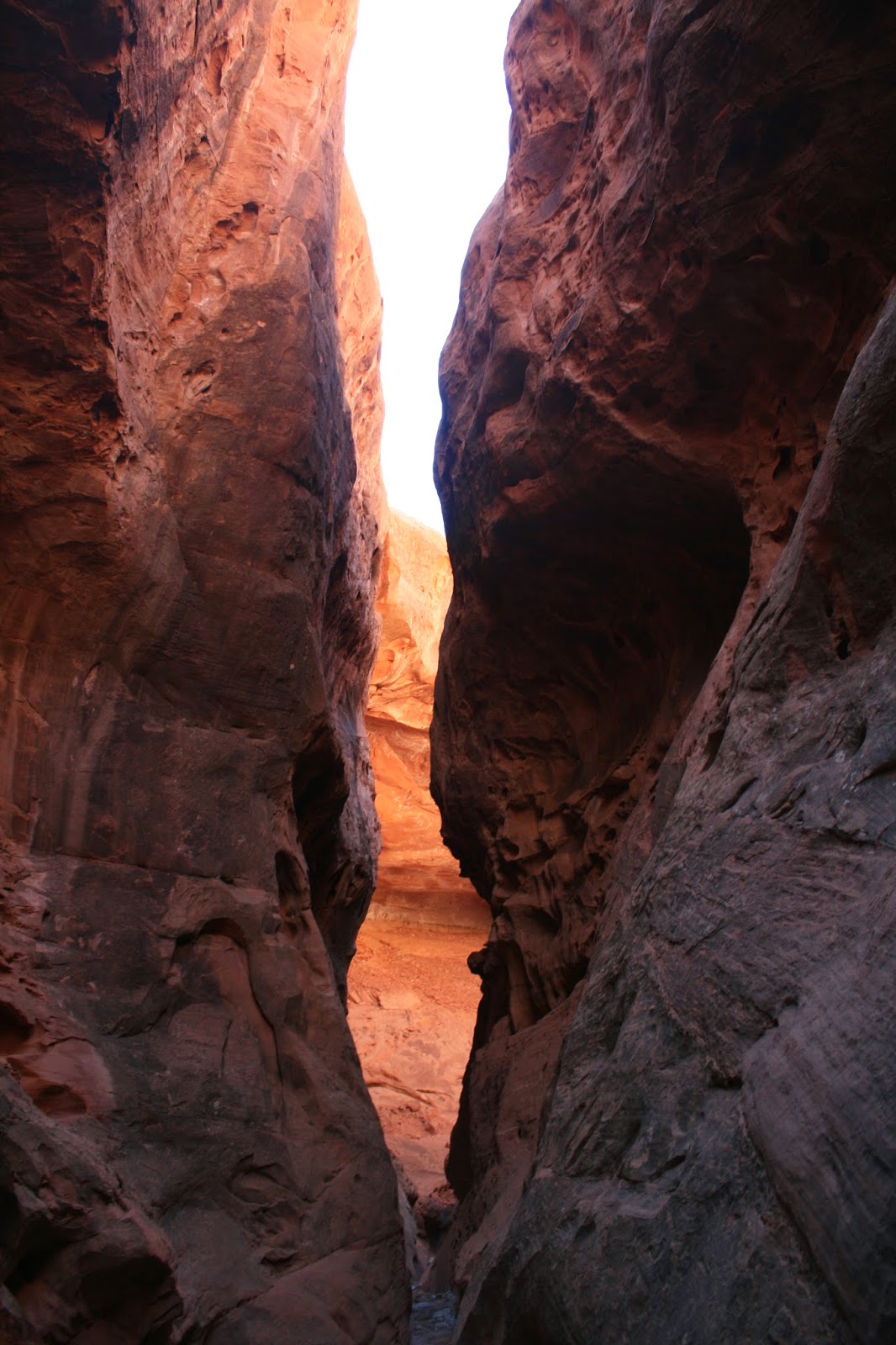 This fall, I took a couple trips down to Muley Twist with friends - one to the upper part of the canyon, and another to the lower part. This post concerns the hike through Upper Muley.

My friend Justin and I left Salt Lake on Friday evening and drove down to the Boulder, Utah area. We camped high on Boulder Mountain (at around 9,000 feet). A warm sleeping bag is a necessity up that high in late September. We got up the next morning, waded through some red tape to get our permits, and headed along the extremely scenic Burr Trail road into the Waterpocket Fold district of Capitol Reef National Park. We got started hiking around mid-morning.

Unfortunately, there's no reliable water in Upper Muley, so we each carried around 4 liters for the 2 day round trip. Upper Muley has plenty of arches, and the miles passed quickly when we weren't stopping to take pictures. A particular highlight was the impressive Saddle Arch, where we also found a pothole of pristeen water from the recent monsoons. 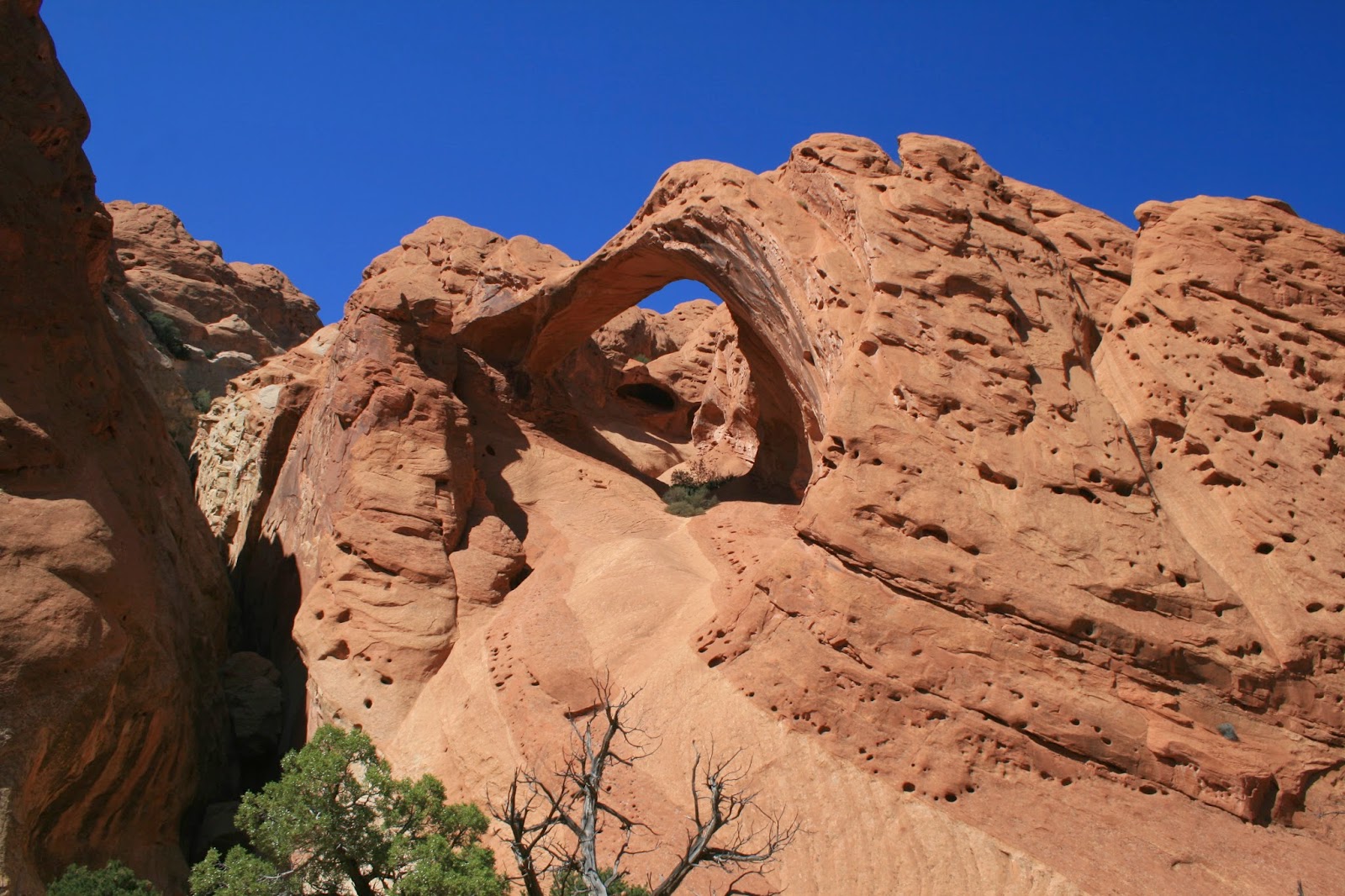 It got fairly warm in the canyon as we continued upward. we stopped in a couple side canyons to get some shade and take some photos. I'm sure there were many more arches that we didn't even see. 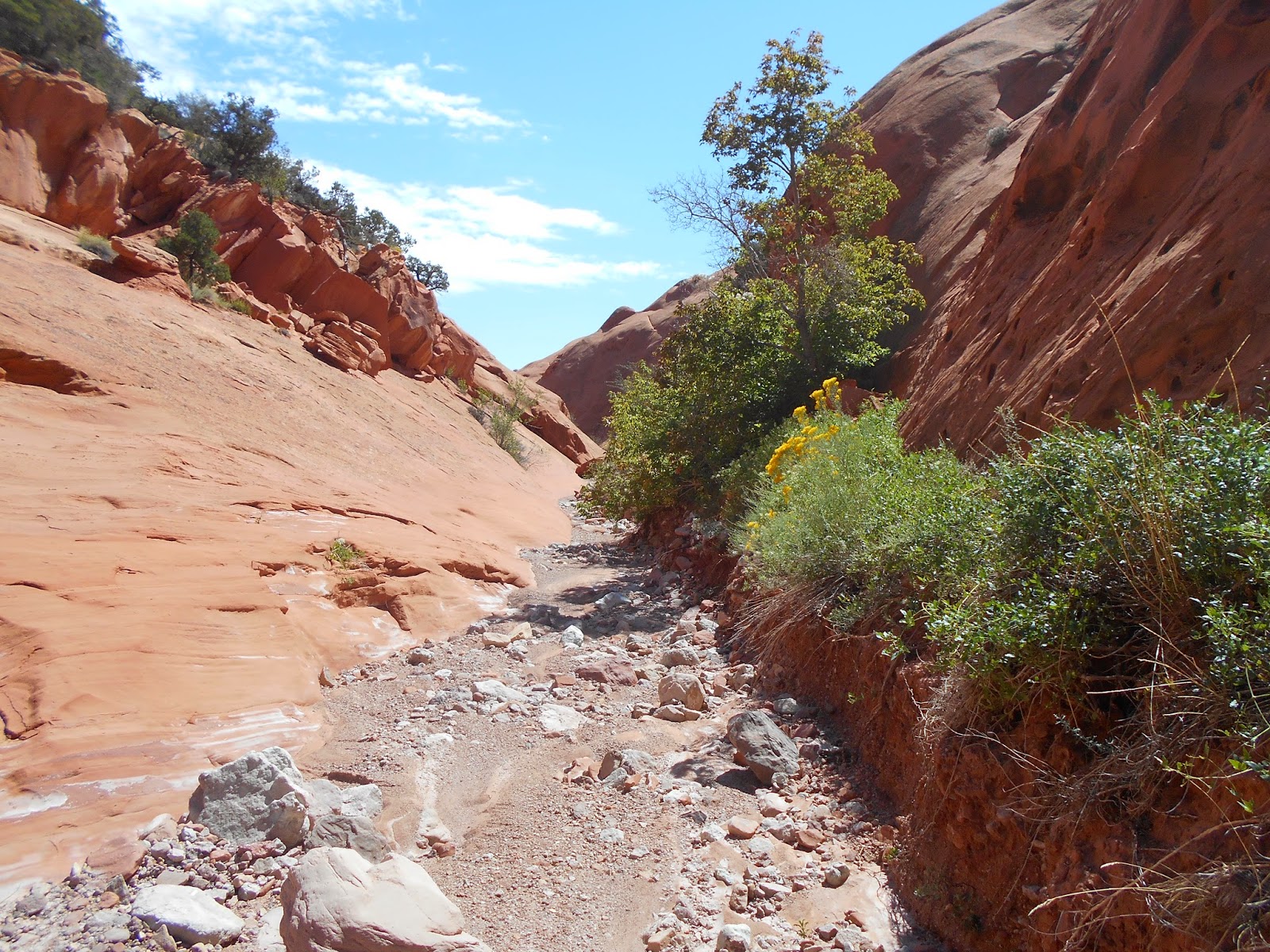 Finally, at the top of the canyon, Lower Muley turned into a slot before disappearing entirely. We explored the slot for a while. The different colors of the rocks were breathtaking. 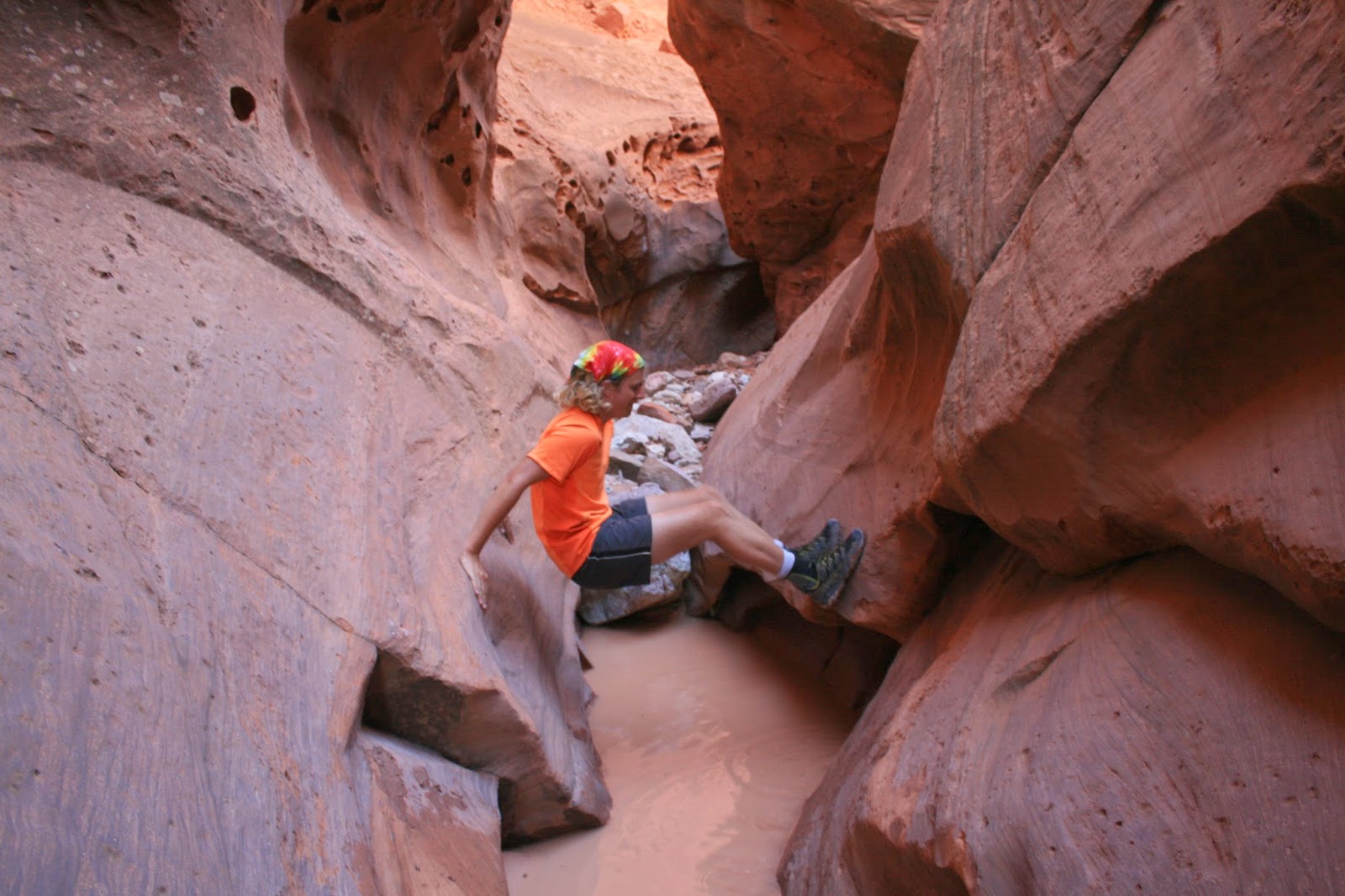 After the slot, we climbed out of the canyon on a decently sketchy cairned route. The ascent was a steep slickrock endeavor, and there were a couple of no-fall zones sprinkled in, just to increase the adventure factor. But once we got onto the canyon rim, the views were spectacular. The canyon rim also serves as the eastern edge of the Waterpocket Fold. To the east was the canyon we had just climbed out of, and to the west was a huge gulch, innumerable mesas, and the Henry Mountains. 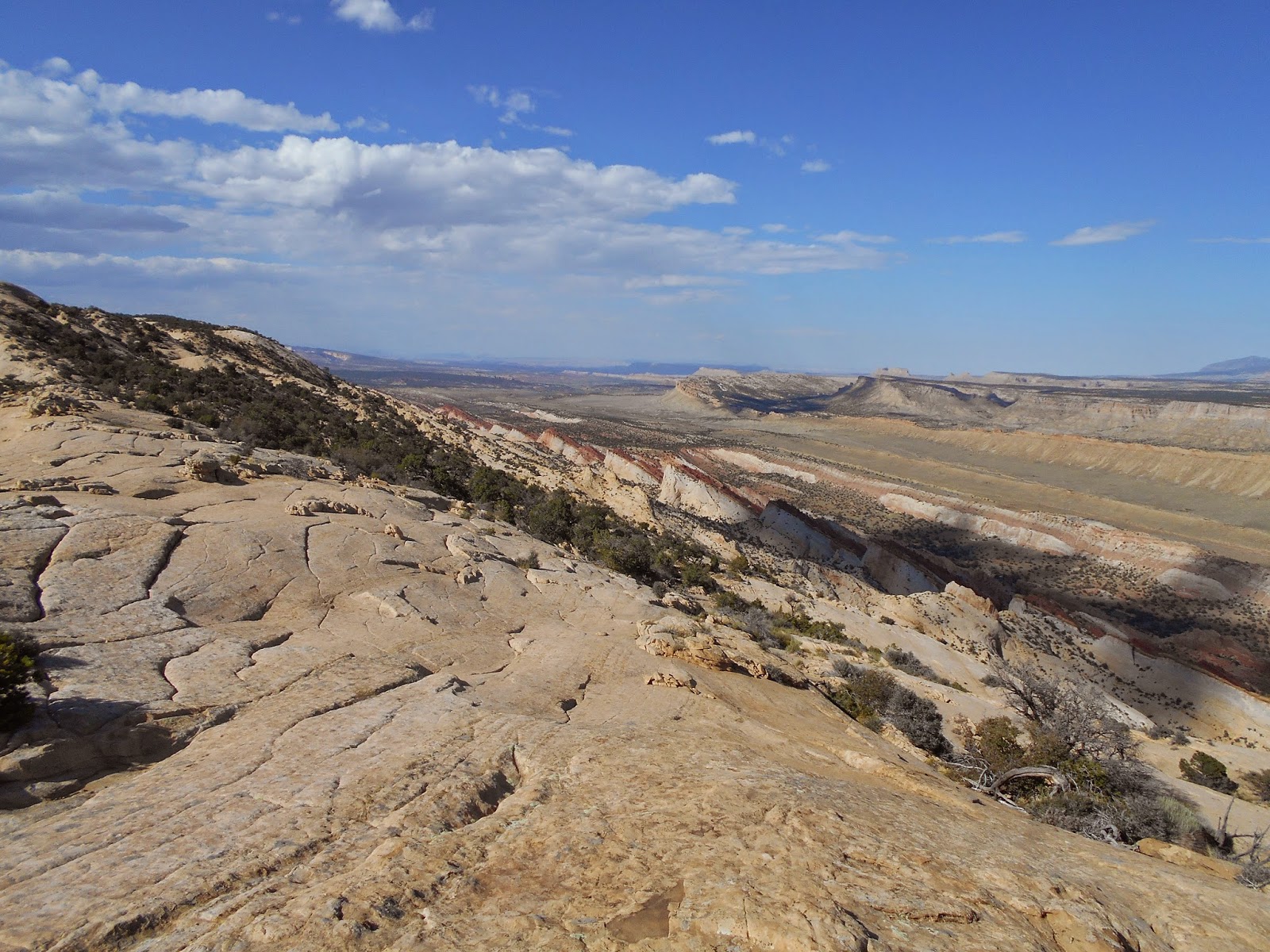 We found another clean pool of water up on the rim, and hiked for a few hours before making camp on the rim. Our campsite that evening was simply outstanding. Fifty yards to the west was the dropoff into Upper Muley; fifty yards to the east was the Gulch and the western edge of the Waterpocket Fold. It was a warm, pleasant evening.

The next morning we watched a phenomenal sunrise over the Henry Mountains. It was a short couple of hours to drop back into the canyon and retrace our steps back to the car. 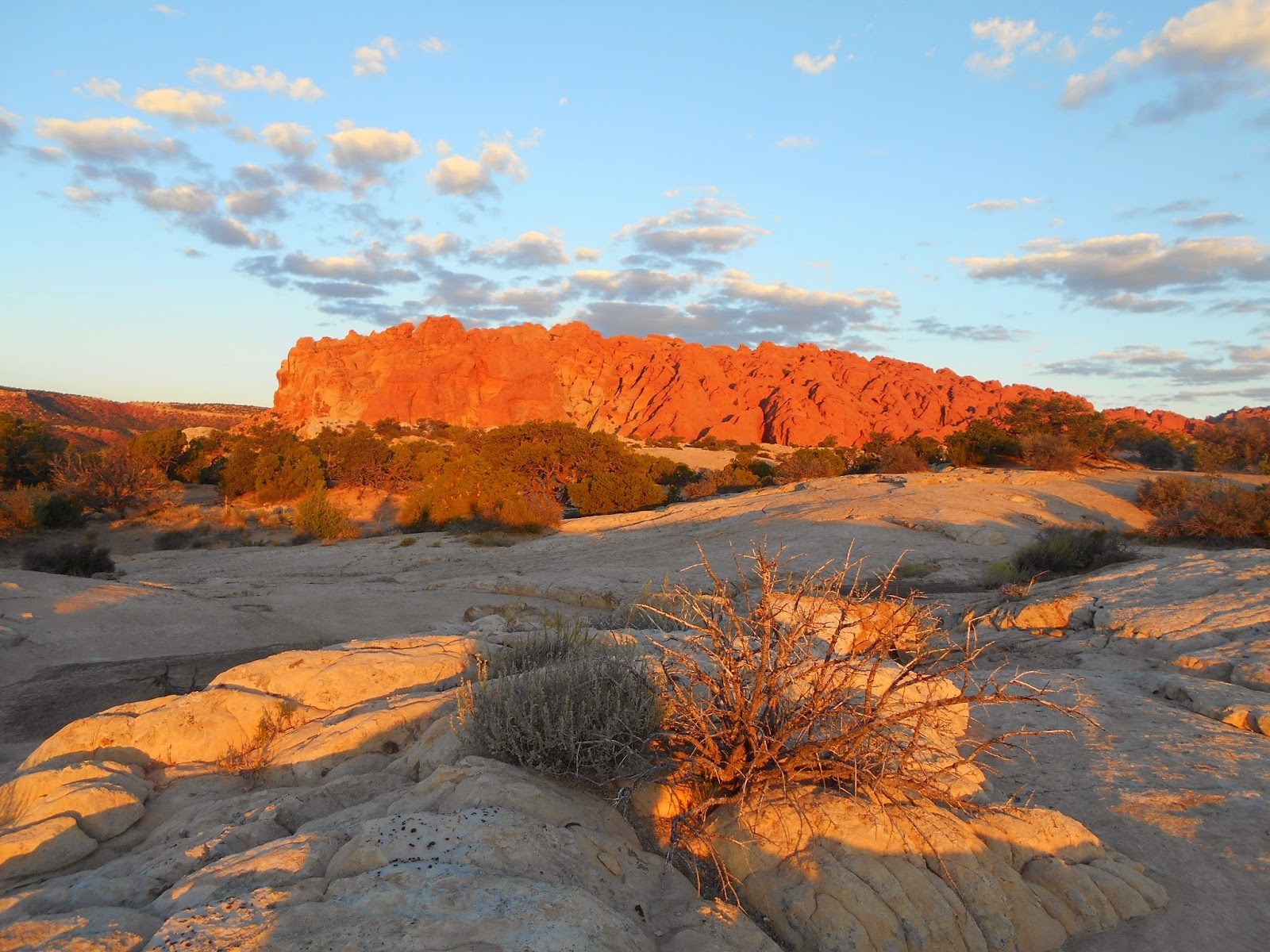