The Uinta Highline Trail - A Guide 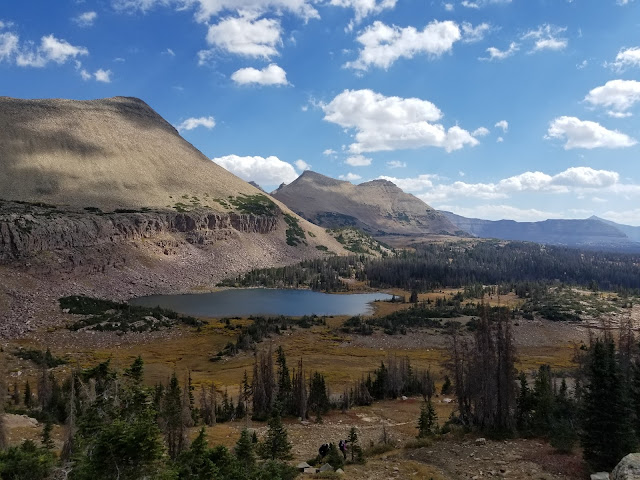 Updated for the 2021 hiking season.


Over the past few years, the Uinta Highline Trail has increased greatly in popularity. I often get questions from prospective UHT hikers about the trail. This page is intended to be a quick planning resource to address those questions.
Where is it?

The Uinta Range, in northwestern Utah, is a sub-range of the Rocky Mountains. It's home to all 14 of Utah's thirteeners (peaks in excess of 13,000'). It's one of only ranges in the United States that runs east-west, rather than north-south. The UHT parallels the crest of the Uintas through mostly alpine terrain.

Why should I hike it?
Unlike many other classic backpacking destinations (Winds, Sierra, Cascades), the Uintas aren't particularly jagged. Instead, you'll be impressed by the bigness of the place. The Uintas are high enough that the basins, not just the peaks, sit above treeline. The views from the passes are truly incredible, and there's nothing better than walking past an alpine lake while peaks tower overhead. And speaking of the fishing, it's pretty great in many of the lakes. The Uintas (and in particular the UHT) have become more popular in recent years, but solitude is still found in abundance.
How long is it?

Anywhere from 65-102 miles, depending on your choice of eastern trailhead (more on that below). Call it 5-10 days for your average hiker.

Where is the eastern trailhead?

There are three options:
I personally highly recommend option #2, the Leidy Peak trailhead. Starting at Leidy will give you an all-killer-no-filler hike which has a consistent theme and feels "complete". Starting at the Highway 191 trailhead, to me, seems like a 20-mile approach trail just to get to the good stuff. Starting at Chipeta Dam misses a rather nice section of trail, for no real benefit other than shortening the hike. As always, hike your own hike!

Where is the western trailhead?

How do I get from one trailhead to another?

This is the most significant logistical challenge of the Highline. Those who have friends/family in the area are probably best off bribing somebody with gas money and a nice dinner. Those from out of state will have a bit harder time.
I've seen various people offer their services on the internet over the years, but they come and go quickly. Recently, multiple users have reported good experiences with Mountain Trails Transport. If you use a shuttle service and have a good experience with it, please shout it out in the comments.

For those hikers who are coming from out-of-state or who don't have somebody to shuttle them, it's possible to self-shuttle using a mixture of hitchhiking, Utah Transit Authority buses, and free Summit County buses. For detailed information, step-by-step directions, maps, and more, please visit the UHT Shuttle Page.

When can I hike it?

As soon as Dead Horse Pass melts out. In most years, that's around mid-July. My first UHT hike was in an average snow year, and the north side of Dead Horse was still fairly snowbound on the 4th of July. If I were planning the trip in advance, I probably wouldn't plan to start until about the 3rd week of July. In a high snow year, it may not be doable without an ice axe until August. By mid-September, winter is on its way. Call it mid-July through mid-September.

When should I hike it?

In August, you'll have drier trails, fewer bugs, and golden grasses in the high basins. You'll still have thunderstorm issues and some lingering bug issues.

In September, you'll have beautiful fall colors (when below treeline), very few thunderstorms, and no bugs. You'll also have colder temperatures and the ever-present threat of early season snow.

In my mind, the end of August is an ideal time to hike the Highline - in that short window between when the bugs and thunderstorms subside, and when winter hits. Were I to plan a trip right now, I'd plan it for the last week of August. YMMV!

What direction should I hike it?

It doesn't really matter all that much. It's far more common to hike westbound for a couple of reasons:
Where can I get maps for it?

Maps for this trail are remarkably straightforward. If choose trailhead #2 or #3, as outlined above, you'll need Trails Illustrated Map 711, available at any outfitter in Utah or on the interwebs. If you choose #1, you'll need 711 and 704.

You can also print DIY maps using Caltopo. Simply follow this link (embedded below as well) and print to your heart's content. If you're doing a significant amount of off-trail navigation, this may be a better choice. The Trails Illustrated maps are just fine for on-trail and easy off-trail navigation; however, they have 100-foot contour lines rather than 40-foot contour lines and don't provide as much detail as a Caltopo 7.5" quad would offer.

The trail can be a little faint at times, especially through meadows and open areas. Remember, this trail is pretty remote and doesn't see a lot of hikers. It is a bit rocky in places, especially where horses have done damage to the trail. Be prepared for a few slow/frustrating miles. In general though, it's fairly straightforward walking - generally fairly flat, except for the passes.

What about the passes?

Glad you asked! There are eight named passes on the official route, described here from east to west.

While the UHT is a great hike overall, I think there is a little room for improvement. Below are a few recommendations:
In addition to the above, savvy hikers will notice that the eastern end of the Uintas (east of Anderson Pass) are pretty gentle. Lots of off-trail alternates are possible through here, including along ridgetops. The travel is slow, rocky and frustrating at times, but jawdropping. Ridgetop alternates are not advised during July and August due to limited bailout opportunities and the likelihood of afternoon lightning storms.
What about weather?

It's gnarly, no two ways about it. Particularly in the height of summer, the Uintas experience a consistent afternoon thunderstorm pattern. Unless you're interested in getting charbroiled by a stray bolt of lightning, you'll probably want to be below treeline by noon each day. That often means you'll hide in your tent for a couple hours while it storms like the dickens outside.

In general, hikers in the Uintas are served well by getting up early and hiking hard all morning, knowing that the afternoon will be slower as the storms roll through. The passes, conveniently, are about a dozen miles apart. Start hiking at 6am, and you'll often complete your daily mileage by early afternoon.

They're not a big problem up high. I don't know anybody who's seen one above 10k in the Uintas - and the UHT stays at/above 10k for its entire length. Proper food storage (e.g. bear-bagging) is required, but bear canisters are not. Utah is not home to any grizzlies at this time - only black bears.

What about water?
If you're starting at US 191, there's a long (20-mile) before you get to Leidy Peak. I've normally found a little bit of water running across the trail in the Leidy Peak area, but it's not reliable. West of Leidy, you should find tons of water and shouldn't ever have to carry more than a liter or two.
Of note, there is an unmapped but reliable spring on the E side of Anderson Pass at about 12,400. It flows right across the trail. It's a bit hard to collect (use a quart zip-lock to scoop from shallow flows) but I've seen it running even in September of a dry year.
What about resupply?
There are no practical opportunities to resupply along the UHT. After Leidy Peak, it crosses just one dirt road - at Chepeta Dam - and that road has zero traffic. I suppose you could arrange for a friend to meet you on that dirt road with some food, but to be honest, most hikers just carry all their food with them.
What about cell coverage? It's basically nonexistent, Verizon does get some service atop Kings Peak (and I've heard reports of AT&T as well), but you should plan to be completely incommunicado for the duration of your hike. Get a good weather forecast before you leave. Those of a cautious disposition may consider carrying a personal locator beacon in case of emergency.
What about red tape?

Basically none. Yippee! If you park a vehicle on the west end, along Mirror Lake Highway, a self-service permit is required. Permits are available at the Highline Trailhead itself or at a permit station along the highway. America the Beautiful passes are accepted.
Campfires are prohibited in many of the more popular basins along the UHT. If you plan to have a campfire during your UHT journey, be sure to download or print a list of campfire-restricted areas, available on the Forest Service's website. Do not rely on the Trails Illustrated maps - while it does shade some popular areas in purple, I've noticed several discrepancies between the TI maps and the actual Forest Service order. Better yet, please consider forgoing a campfire - in sensitive alpine environments, the impacts of campfires can last for years.

It's excellent. Fish will bite at just about everything up there. I am a complete fishing novice and even I can catch a few. Don't forget your a Utah fishing license!
Posted by LarryBoy at 7:02 AM