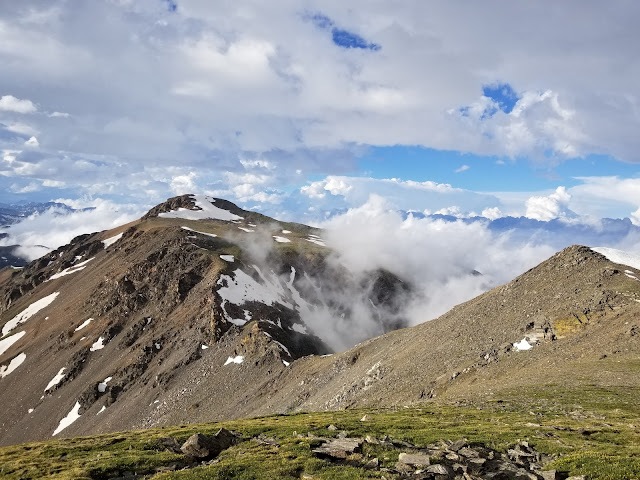 In the past, I previously avoided Colorado as a hiking destination. I knew I'd see so much of it during my CDT hike - and I wanted to see it with fresh eyes when I walked into the state. As it turns out, that strategy was unnecessary. I've seen so many wonderful things in this state - and yet, I've already compiled a long list of things I want to come back and see. Such beauty!

Beating the Pattern: Every northbound CDT hiker has thunderstorm problems. Except this year. Monsoon season typically begins around July 1st. This year, because of the low snowpack, I've been able to breeze through the state before the storms really get going. I've used my rain jacket twice in the state - and both times, just for a few sprinkles

Momentum Slowing: I took two zero days in all of New Mexico. In Colorado, I've taken probably a dozen. While I've had legitimate reasons for each zero, it still is a bit maddening to constantly be spending time in town, not making forward progress. Weather, snow, friends, and injury have stalled the otherwise blazing pace I'd been setting. While I still have plenty of time to make it to Canada, all thru-hikers feel a certain relentless motivation to keep going - to keep making forward progress

It's Back: After a five year hiatus, the ankle issues that plagued me on the AT have come back in force. Any time I push bigger miles, or hike over rough terrain, I wake up the next day barely able to walk. When I started the trail, I recognized the possibility that I'd have to walk in daily pain all the way to Canada. Looks like that will be the case. These are the situations that test resolve and commitment. I'm determined to make it. Good thing they sell Ibuprophen in mass quantities.

The Metropolis: Northern Colorado is probably the most "civilized" part of the CDT. There are quite a few towns, major roads, ski resorts, and, most importantly, trailheads with privies. The food carries have been relatively short and there are even trash cans to get rid of smelly tuna wrappers. Such luxury!

What's Next: There's only one town left in Colorado - Steamboat Springs. Once I cross the Wyoming border, the terrain will flatten out for a few hundred miles before the crown jewel of the CDT - the Wind River Range. But all that is a week or two away. For the time being, it's about setting a sustainable pace, healing up if possible, and regaining momentum - I'm almost halfway. Onward!

Well, the San Juans were everything they were cracked up to be. I expected beauty and misery and got both, in spades.

I entered the range on May 15, and it showed. The next eighty miles were almost entirely snowbound. Each morning, I walked on frozen, hard snow. Any steep terrain quickly became a treacherous affair. Each afternoon, the snow softened and I spent hours postholing - sinking in snow up to my knees, waist, or even deeper with nearly every step.

Decisions, decisions: I've never been more grateful for the avalanche education I've received over the past several years. The actual avalanche danger was quite low in the San Juans, but avi education has provided me a good framework for decison-making in the outdoors. The San Juans were safely navigable, but it took every tool in my metaphorical toolbelt to do so. I had to make the right decision, every single time. I took multiple alternate routes, frequently walked the ridgetop rather than the trail, timed my days to avoid steep and icy sidehills, etc. I can say, with a certain degree of pride, that I stand behind every single decision I made in the San Juans. Of course, you can make a thousand good decisions, and only one bad decision can still end you up in trouble.

Waiting it out: After the first eighty miles, I reached Pagosa Springs and had a good long think. While I could certainly keep going, I judged that doing 12-mile days simply wasn't worth it. So I hitched to Durango, rented a car with three other hikers, and took off to the desert of southeast Utah for a week. We did a nice three-day backpack - one that I had done in January and thus had information for already. Of course, all that information resided solely in my brain, but we were still able to find a bunch of Indian ruins in the cliffs and ledges of the canyon system. We made a few other stops to visit Monument Valley and Hovenweep National Monument. I enjoyed the chance to return to a place I consider home - and to see other people experience this magnificent landscape for the first time.

Round two: After a week off-trail, I got back to the CDT and continued north. The decision to wait it out was immediately validated - while there was still some snow and ice left, it had melted out considerably in the past week. I didn't use my ice axe a single time in the next 120 miles. By time I neared Lake City, the mountains were nearly snow-free, even at 13,000 feet. I mailed my snow stuff home in town... we'll see if it comes back to bite me!

Staying high: The stretch from Pagosa Springs to Lake City only dipped below 11,000 feet once. I camped above 11,800 feet every night, hiking as high as 13,200 feet. There's not too much oxygen up here! Hiking 20 miles per day does wonders for cardiovascular fitness - hiking at altitude takes it to the next level.

What's next: theres about 20 miles of high terrain ahead of me, including the opportunity to climb a fourteener. After that, the trail dips down into a lower area with a lot more roadwalking. The miles should go a bit quicker for the next several days. And each day, more snow melts. I've made it through the worst of the snow. There's more tough stuff ahead. But so far, so good. Onward!