I get asked that by pretty much every single person I know these days. I’m not sure what they’re expecting to hear. Some of them, of course, are just being polite, in the same way that we say “how are you?” without really expecting a substantive answer. But for the rest of them, the people who really do want to know, what am I supposed to say? “Oh, it was great!” I suppose that’s true, but it’s so vague as to be meaningless.

How am I supposed to sum up four and a half months of my life in some sort of trite answer? The only thing I can say is this: It was wonderful, terrible, scorching hot, freezing cold, rainy, muddy, beautiful, frustrating, magical, perfect, lonely, socially stimulating, humbling, confidence-infusing, exhausting, refreshing… And I’d do it all again in a heartbeat.

The trail was the best four and a half months of my life. It was FUN. But it wasn’t fun in the same way that, say, spending a day at an amusement park is. Think of the closest relationship in your life: it’s not always fun, but it’s always worth it, and on the whole, it’s your highest enjoyment. It’s not shallow fun, it’s a joy.

But let me back up. I last updated in Hanover, NH. Hanover is the gateway to the White Mountains, the most rugged section of the entire trail. I was pumped. And I was totally justified in doing so. The Whites were AWESOME. I stopped in Glencliff, NH at the Hikers Welcome Hostel (yes, it was just as inviting as it sounds) and refueled, got some good advice on stealth camping in the Whites. Then it was off to climb Moosilauke, the first real peak in the White Mountains. At over 4800 feet, it was almost 1000 feet taller than anything since southern Virginia. It was also the first mountain on the trail that was above treeline. It reminded me of being out west. You know, actual mountains. We (Bright Side, Passover, Witchdoctor, and I) had an absolutely perfect day to summit: sunny, clear, and warm. The wind was only about 40mph, which is about as good as you can ask for in the Whites. Each afternoon, it started thunderstorming, which is rather concerning if you’re holding two metal poles in your hands above treeline, but with a little planning, I managed to play the weather pretty well. 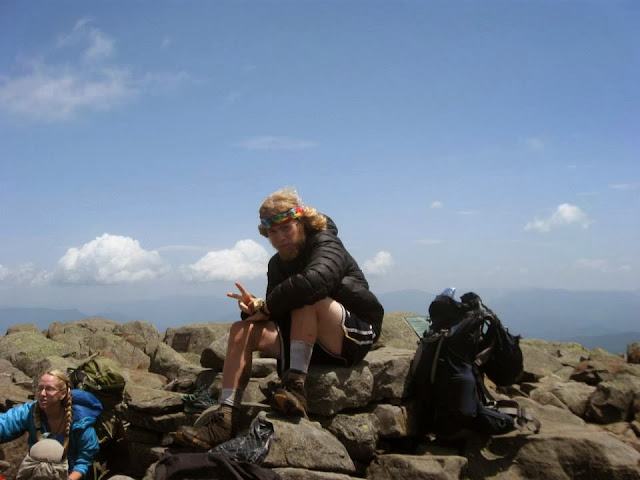 Well, almost. On the day I summited Mt. Washington (the second highest peak on the trail, at 6200 feet), Bright Side and I got up really early and hustled to try and get to the Madison Spring Hut before 3pm, after which there was a likelihood of severe storms. As a side note, there are very few places in the Whites where you can legally camp. There’s a 20-mile stretch, in fact, totally above treeline, and the only places to stay are at the Appalachian Money Mountain Club’s “huts”, which are basically small hotels on top of mountains. They go for $130 per night. There are “work-for-stays” available for two thru-hikers each night. This means that you wash dishes, sweep up, etc, in exchange for feeding on the leftovers from supper, as well as being able to throw your sleeping pad on the dining room floor after all the guests go to bed. You get treated like a third-class citizen (by the guests; the hut crews in general love thru-hikers), but you get ALL THE FRESH-COOKED FOOD YOU CAN STOMACH!

Anyways, the entire stretch from the Mizpah Hut to the Madison Hut (15 miles) is above treeline, with no place to camp. I arrived at the Madison Hut just in time; it hailed on me on the way, but I was safely inside the hut by time the lightning started striking where I had been about 20 minutes prior. Then came the twist. The Madison Hut crew is evil. Since we got there “too early” (you’re not supposed to get there much before 4pm), the crew sent us out… in a lightning storm, over the top of 5700-foot Mt. Madison. Sprinting across boulders above treeline isn’t fun in the slightest. Of course, we weren’t the only people that the sadistic Madison crew screwed over: they made one guy hike over Mt. Washington, in a thunderstorm, with a leg bleeding so bad he had to get stitches. Why? Because he too made the egregious error of arriving 30 minutes too soon. There’s following the rules, and then there’s being morally irresponsible.

Really, though, aside from the miserable experience at Madison, I had wonderful hut stays in the Whites. The hut crews fed me well, treated me well, and (if such a thing appeals to you) liked to share their booze. Yeah, they’re college students, in case you haven’t gathered.

The Whites were hard. But they were worth it. I had a great day on Moosilauke, an epic windy and foggy day on Washington, great views along the entire Presidential Range, and reconnected with some trail friends. The Whites were hard, absolutely. But they’re my favorite part of the trail thus far. 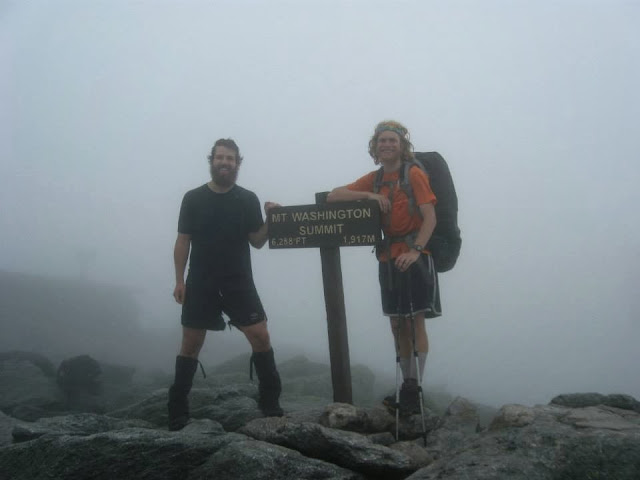 Southern Maine doesn’t get the press that the Whites do, but it’s almost as tough. Doing a 15 mile day is still a huge accomplishment over that kind of terrain. One of the highlights of my hike was the so-called “hardest mile on the AT”, Mahoosuc Notch. Imagine a canyon with sheer vertical walls, and in the bottom, a “jumbled pit of boulders” the size of houses. You have to climb over, around, and even under these rocks. It takes some people up to 3 hours to traverse the mile. I think that there were much, much harder miles on the AT, but this one was certainly the most fun. I thought it was just a big rock jungle gym. The Notch was the last major psychological barrier to break on the AT. For a few months, I had wanted to at least make it that far, to prove that I could take the absolute toughest that the AT could throw at me. And I passed with flying colors.

After the Notch, it was time to get off. Those last few days were some of the most difficult trail days for me. I couldn’t think about anything else other than that emptiness that getting off the trail prematurely would certainly bring. It’s not the fact that I’m not a “thru-hiker” that bothers me; I just want to know what’s around the bend. I want to climb to the top of Avery Peak, Saddleback, Bigelow, and most importantly, Katahdin. But more than all of that, I want the hiking life. I love the freedom, the independence, the simplicity, the importance, of life on the trail. Some people were counting down the miles until their hikes ended. Not me.

I’ve thought a lot about what it feels like to be off the trail. When I look at everyone’s Katahdin pictures, something seizes me, and it’s tough to say what it is. I guess the best way to describe it is “unfinished business”. That trail is mine, and I’m going to finish what I started. Period.

I was going to end the blog on that  note, but that doesn’t seem quite fair. Because I’ve gotta roll the credits. Thanks go to:
·         Mark and Wendy, trail angels in the Smokies, for picking me up after a really frustrating, icy day
·         Miss Janet, for bailing an entire tribe of us off the mountain in the worst snowstorm in years
·         Bob Peoples, for being the Most Interesting Man in the World
·         The Bastian United Methodist Church, for the best breakfast I’ve ever eaten, anywhere
·         Nomad. Not just for the good work that you do, but for the spirit of service to God. Straight out of Matthew 25
·         The fine folks at the Bears Den Hostel
·         Blue Moon, for being a wonderful friend, baseball connoisseur, and considerate person. I never had a true “hiking partner” on the trail, but I’ll admit it was tough to say goodbye back in PA.
·         Bright Side, for sticking together to make it through the rain in New England.
·         Passover and Witchdoctor, for bringing so much joy wherever you went. Also for motivating me to push through the pain
·         Mary Jo and Jerry! Thanks for taking dirty, smelly hiker trash into your home for a couple days. Had an absolute blast with some dear friends
·         The Glencliff hostel, for great service, stealth camping info, inspiring dreams of the PCT, and preparing me mentally for the Whites
·         Coups, Dirty Mike, Chino, and Ayce, for not running me over as you flew past me on the trail.

And a special mention goes to my family, for being there for me. They were a listening ear when I complained about endless snow and cold. They sent me stuff as needed. They prayed their hearts out for me. And they actually read every word of these silly blog posts:

·         Dad, for being unfailingly encouraging
·         Mom, for being willing to do anything and everything to help
·         Grandpa and Grandma Start, for praying, following my blog, and getting almost as excited about my adventure as I was.
·         Josh, Jennifer, and Nichole, who made my entire week better when I had chances to call them.