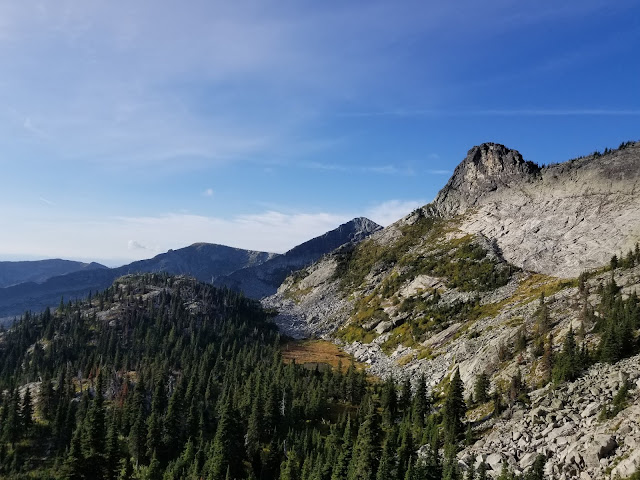 When I began the Route In Between more than five months ago at the Arizona/Mexico border, I had my doubts. Even the easiest long-distance hike is still an immense challenge, and this hike was shaping up to be the polar opposite of an easy hike. Those doubts in the back of my mind only intensified as I moved farther north and snow kept piling up in Utah's high country After making ponderously slow progress over my first high (10,000') plateau in deep, soft snow, and studying the long-term weather forecast and snow depth data, I made a business decision to sit it out for five or six weeks, rather than taking a lower route that didn't fit with the route's alpine theme.

At that point, in late May, I would have told you that the odds were against me completing the RIB this year. My resolve to try never wavered, but by time the snowpack consolidated to my satisfaction, it was already late June. Winter generally returns to the Northern Rockies not long after Labor Day. From here on out, I had little margin of error - no insignificant concern when hiking a completely untested route.

But for the grace of God go I. The route offered not only amazing scenery, but relatively quick progress over most of its length. My pace slowed somewhat when I got on the Idaho Centennial Trail, as bushwhacking and fewer hours of daylight took their toll. But I pushed a little harder, finding an extra gear for the final month or so.

And on a cold, rainy, miserable day in mid-September in north Idaho, I reached my destination - Upper Priest Falls, a stone's throw from the international border. No sign marked the end of the ICT, nothing commemorated the accomplishment. It was a dead-end trail to a waterfall. That's it. Almost a little anticlimactic, don't you think?

In a sense, though, it was a fitting end to the RIB. It's a nothing, a void, a mere suggestion. It's a theorized line through empty space. Nobody (except for you, dear reader) knows what it is, nobody cares that you've done it, nobody takes notice when you add "RIB 2019" to your ridiculous self-congratulatory Instagram bio. I aim to prioritize experiences over accomplishments. I think this route achieved that. 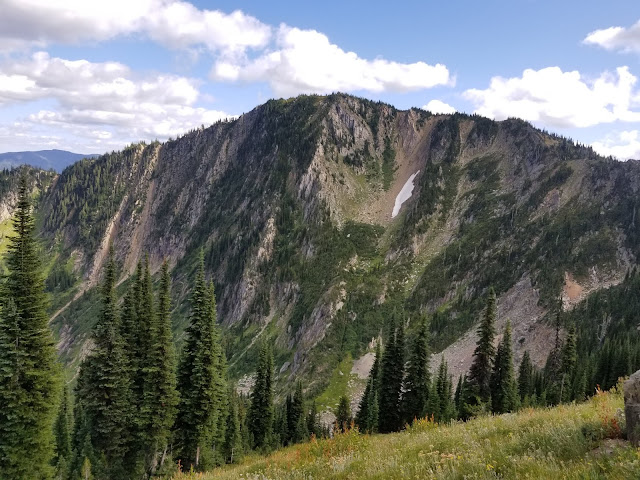 The ICT at its Best: As you'll recall, my previous post was largely a laundry list of complaints about how unpleasant the ICT had been through the vast wilderness areas of central Idaho. I had heard from my friend POD (a recent ICT finisher) that things got much better after leaving those wilderness areas behind. To be honest, I had a little trouble believing her. After all, the story of the ICT thus far had been terrible trail conditions and merely adequate scenery. But she was right: north of Kooskia, the ICT really stepped up its game.

I hiked up a beautiful creek on clear trails and spent days on the crest of the beautiful Bitterroot Mountains with my right foot in Montana and my left in Idaho. I cruised along more well-maintained trail, interspersed with some dirt roads, and looked down on dozens of gorgeous alpine lakes nestled against the flanks of the main ridge. I saw almost nobody, the weather was clear, and for a few glorious days, things just fell into place. 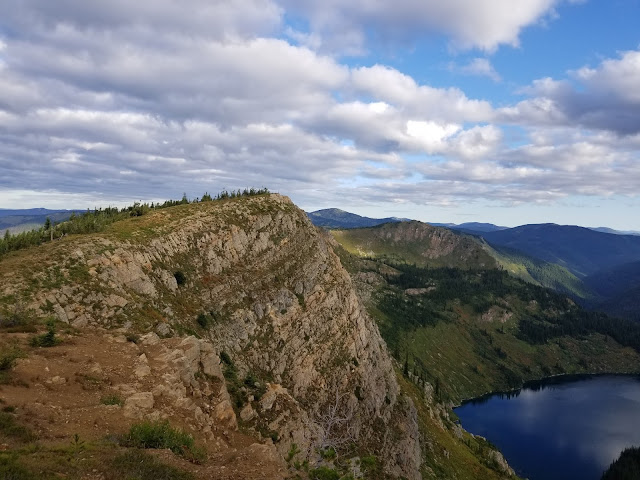 Fall has Arrived: All good things must eventually end though, and when I crossed Interstate 90, I got off trail for a few days for a family event. When I got back on, fall had most definitely arrived. After one last beautiful sunny day, a cold rain began to fall. All told, I got rained on for eleven straight days. I spent a three day stretch on the crest of the Cabinet Range entirely in the clouds, with a maximum visibility of about 30 yards. I imagine it's quite beautiful, though I never could see far enough to judge for myself. I did however have acceptable weather for the one stretch of trail that I really needed good visibility for - an off-trail pass that separated two alpine lakes. For that, I am very grateful.

Rain Forest Surprise: Judging from the vegetation in north Idaho, I'm certainly not the only person to get rained on up there. In particular, I hiked my last few days through incredibly lush forests. Everything was covered in moss. Even under cloudy skies, the greens were so vibrant they almost seemed artificial. And of course, the trees were huge and majestic. Huge hemlocks and red cedars dominated, some of them hundreds or even thousands of years old. Just four thousand feet below the alpine zone, this environment proved wet, boggy, and uniquely beautiful - not what I was expecting from Idaho, but a great treat!

A Word of Gratitude: Over the past few months, I've run into a few people who asked about/checked out this here blog. Some of you gave me rides (even driving out of your way to do so). Some of you tracked me down and fed me breakfast. Some put up with my endless rambling (sorry about that - you were probably the first human I saw in close to a week!). Some of you provided helpful route tips. And, most significantly, some of you prayed. A hearty THANK YOU to everyone contributed along the way. 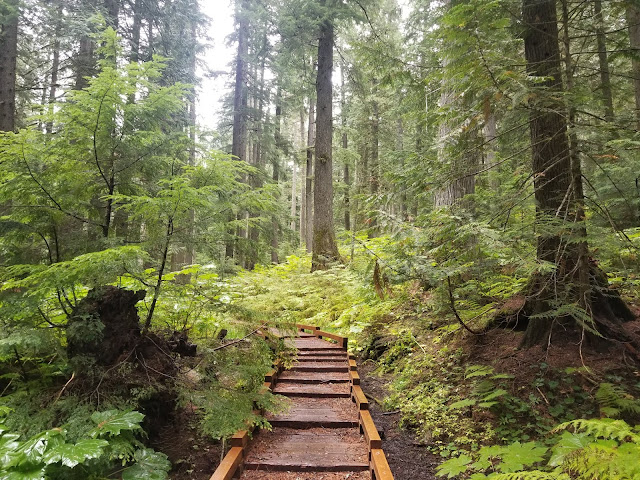 Changing subjects a bit, I'd like to give some overall thoughts, impressions, and themes of the route. I can say with some confidence that the RIB is the best long-distance route I've ever hiked. Of course, as its creator, I'm undoubtedly biased. What parent doesn't hold an unjustifiably high opinion of their child?  Take everything I say, therefore, with a grain of salt.

Diversity: One of the main selling points of the RIB is the unparalleled diversity of biomes and landscapes. In the same hike, I hike through remarkable sky islands, desert scrub, majestic ponderosa forests, red rock canyons, and snowbound plateaus. And that's just in Arizona. In Utah, I hiked through incredibly colorful geologic layers, including the Pink Cliffs that form Bryce Canyon, many alpine and subalpine sections of high plateaus, and traversed the length of the Wasatch Range. In Idaho, I hiked through sagebrush and areas of lava flow, past beautiful mountain lakes, and through mid-elevation forests and river canyons. I cruised through the alpine zone for a while and ended in deep, dark, wet, lucious forests. Such astounding diversity is almost hard to comprehend.

Consistency: Overall, I found the RIB to be exceedingly beautiful, as you're probably sick of hearing by now. But what impressed me more was the consistency of that beauty. There were very few "filler" miles. There certainly were some, as there are on any long-distance route, but the length and frequency of those sections was small. The longest stretch, across the Snake River Plain in southeast Idaho, compared very favorably to its counterparts on other long trails that I've hiked - the Great Divide Basin on the CDT or, heck, most of the mid-Atlantic on the AT. In areas where the scenery and hiking experience promised to be subpar, I took a very direct route and minimized the amount of time and energy I'd have to expend hiking those not-so-great miles.

There are a few areas in the West that I consider to be more beautiful than anywhere else I've been - the Wind River Range, the Beartooth Range, or the Escalante area. The RIB doesn't go through many of those areas. Put another way, the RIB lacks the "perfect tens". But what it lacks in tens, it more than makes up for in eights and nines. This yielded, in my opinion, a hiking experience that was more rewarding on a day-to-day basis than, say, the CDT. The CDT goes through the Winds, goes through Glacier, and those are amazing, but it also has a lot more mediocre miles than the RIB does.

Ultimately though, aesthetics are a matter of opinion, so I'd encourage any prospective RIB hikers to look at my photos, mentally apply a filter to make them less crappy, and then decide for themselves whether the scenery is to their liking. 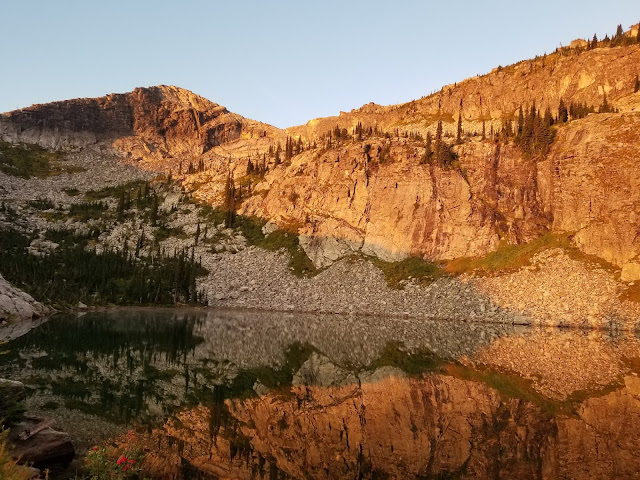 Adventure: I've always felt happiest on-trail when my mind is fully engaged. I enjoy navigating, problem-solving, extrapolating from what I know to make good decisions. I don't like everything laid out for me, as that inevitably leads to boredom and disengagement. The RIB offered a true challenge, one in which there's no answer key in the back of the book. I had great information on the Arizona Trail, of course, but after that little warm-up, I was on my own for the rest of the journey to Canada. I had done extensive research on the Deseret Hiking Route when I mapped it, and while I certainly changed some plans on the fly, I felt that overall, I had good information and a solid plan. I probably underprepared a bit for the Idaho Centennial Trail. Fortunately, the best way information circulates on the ICT is via the hiker grapevine, and I'm very grateful to POD for supplementing the beta I'd compiled with her first-hand observations. She even sent me an annotated map set, which was extremely useful.

Over the course of the RIB, I re-routed several times - sometimes you hit unexpected private land, steep snowpack, or need to bail off the ridge for water. Sometimes a ridgeline that looked impassable on the map ends up being perfectly fine. Each day, I was mentally engaged. I love that.

What's next: Over the next few weeks, I'll be working on some specific planning resources for other hikers looking to do the RIB (Specifically, the DHR, as the AZT and ICT obviously are existing trails with information available). I'm very happy with how the DHR turned out and hope to share it in a more specific format. 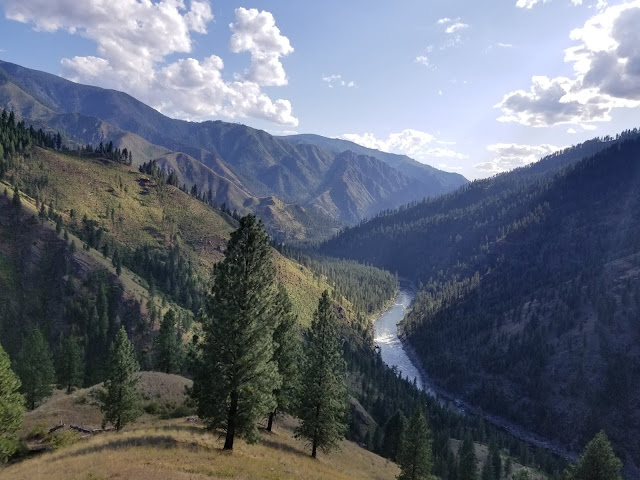