A grand adventure you say? Well I most certainly had one. On my way back to Michigan, I decided to hit a few things I really wanted to see/hike. The first stop was Kings Peak, the highest point in Utah (13,528’). I was a little nervous about it, to be honest, because it was 2000 feet higher than anything I had hiked this summer and I really didn’t want altitude sickness. It was about 27 miles roundtrip. I had originally planned to do a huge day on Day One, summiting and then camping a few thousand feet below. However, packing didn’t go as anticipated and I hung around to say goodbye to my family (such as we are; love you guys!) in Salt Lake, so by time I actually got on the trail it was 12:30pm. With that in mind, I didn’t summit that day, instead camping about where I had planned to camp, but with the summit to do the next day. I was camped at probably 10,700 feet at the base of the first pass I had to cross, Gunsight Pass. Take a gander at the photo below and you’ll see exactly why it was called that. 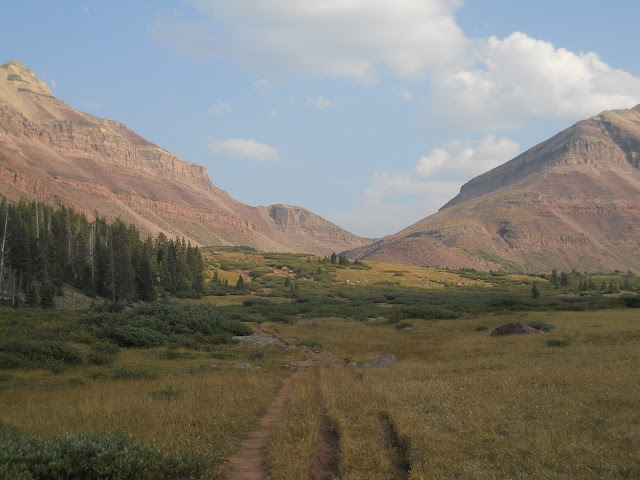 The next morning I woke up with ice on my tent. Now I had plenty of clothes with me to stay warm, but I never dreamed I would need GLOVES! Rolling up a wet tent when you can’t feel anything past your knuckles is just as difficult as it sounds, and even less fun. So off I went, trotting down the trail with my pack on. Except that I’m a moron. The previous day had been ridiculously easy (2000 feet in around 9 miles) and packing 25 pounds was no sweat. That day, however, we gained 2000 feet in 4.5 miles… ish. It was constant ups and downs, and STEEP at that! I quickly abandoned everything I wouldn't need that day on the trailside. My pack thus lightened, we went over Gunsight (11,222’). Instead of dropping back down into a basin and then climbing back up to Anderson Pass (12,500’), we went straight over the top of a ridge. It was a tough scramble to attain the ridge, but it was definitely worth it and saved a lot of time. We took a brief rest at Anderson. The final 1000 feet was a big scramble to the summit. I ditched the pack entirely, jammed a couple things in my pocket, and more or less flew up to the summit. 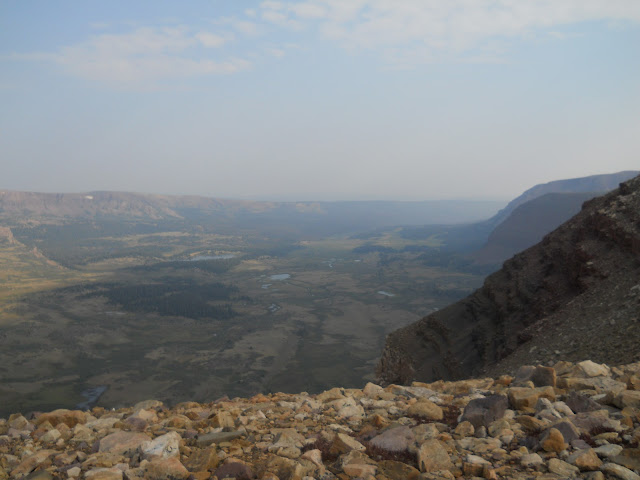 In shocking news, the “we” I refer to does NOT consist of a group of BYU students! I met Bob and Travis and Sophia at the end of the first day when I caught up to them. I ended up camping just a few hundred yards away from them. The next day, we started about the same time and hiked together for a while. Sophia had just been cleared for physical activity following back surgery, so clearly a three-day hiking trip up the tallest mountain in Utah was a wise idea. She and Travis poked along VERY slowly. Meanwhile, Bob is a very fit guy and likes to hike fairly quickly (for being almost 60). So we ended up hiking together up and over Gunsight up to Anderson. From Anderson to the summit I hiked alone, as I love scrambling and like to do it relatively quickly. Bob joined me at the top a few minutes later. The summit was windy and just barely warm enough. But the views were amazing (and would have been better, if not for the rainclouds everywhere). 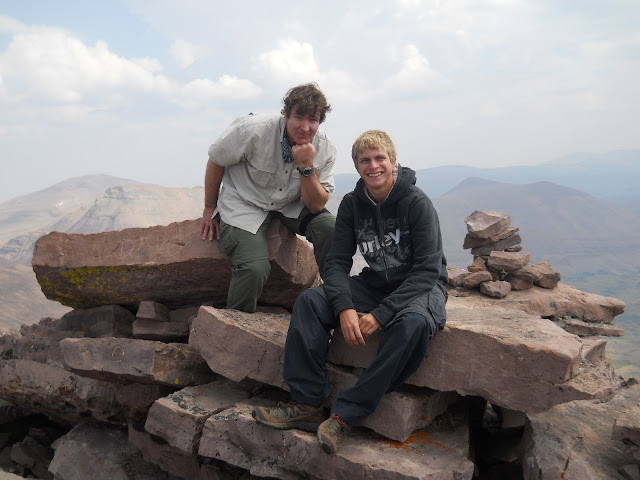 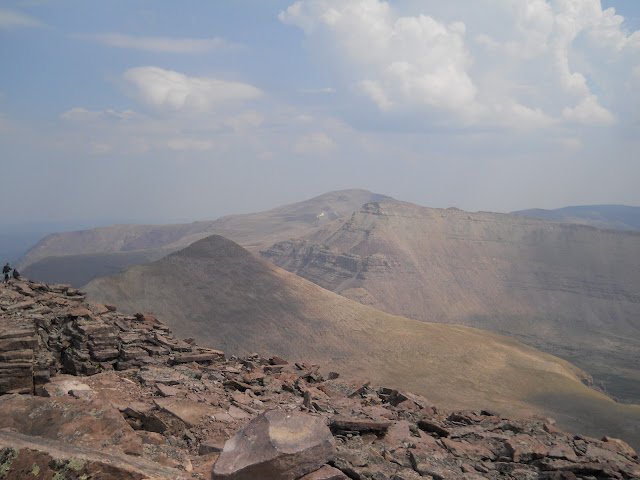 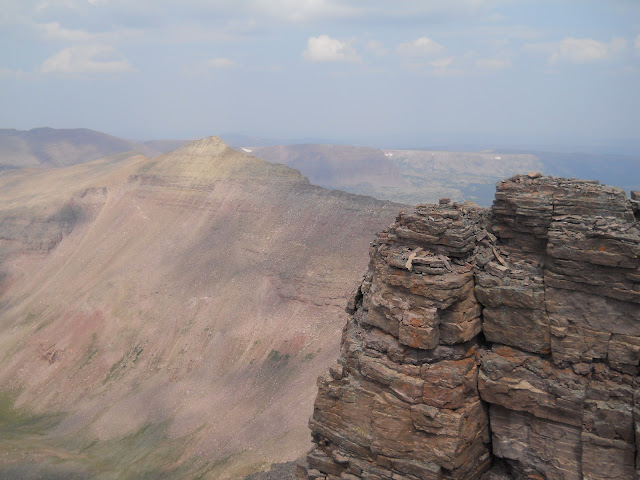 Taking Bob’s advice, I decided to go down a different way than I went up. Instead of going back down to Anderson Pass and then doubling back over a ridge and then down Gunsight, I went straight down a rockslide slope directly from Anderson to the basin where I had camped the night before. Think 2000 feet of loose dirt and rock at a 60 degree angle. It probably saved me a couple hours, but it wasn’t worth the terrible decent. After doubling back to the trail to grab the stuff I had discarded, I did a couple more miles and called it a night. I probably could have hustled more that day and gotten down to my car around maybe 10 or 11 PM, but there was really no point in that, as I would have to camp there at the trailhead anyway. So I called it an easier night around 6 PM and decided to just hike it out the next day. 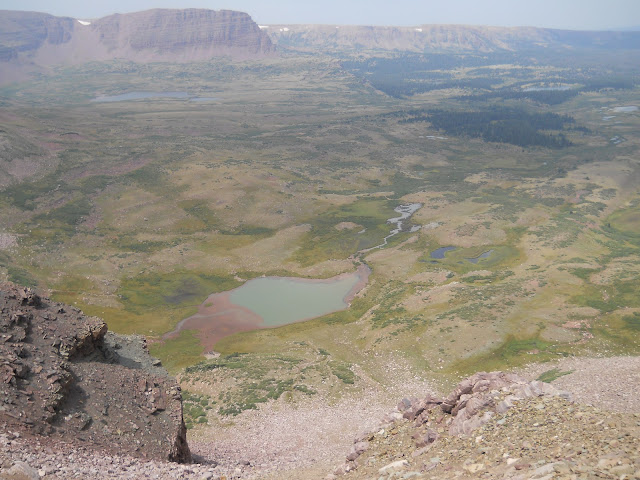 The final day was more or less a cakewalk. It was about 8 miles to the  trailhead, which I would have pounded out in about 2.5 hours had it not been the time I spent talking to Greg. Greg is a former Scout leader (by the way, scouting is incredibly popular in Utah, especially among Mormons) who has a badly degenerating back. Because of this, he’s unable to pack anything on his back. However, he wanted one last outdoor hurrah. So he got a two-wheeled card, packed all his stuff on it, and was huffing and puffing and bumping his way up the trail with this cart (which doesn’t bode well over rocky terrain). He was complaining about how we’re a “nation of wimps” and that young people don’t like to challenge themselves anymore. He was apparently very impressed that I had done Kings and told me that I was making it into his “memoirs”. I’m not exactly sure what that means, but I think it’s a compliment. He also kept calling me Jason for some reason. I suppose he’s made it into my memoirs too.

I was back to the car by 9:30 and refueled my gas tank and my belly and headed to the Tetons. More to come on that.


Oh, the Utterly Impractical Hiking Item Of The Week? I have two entries: First, I found a watermelon rind wedged between two cracks at the summit. If you thought bringing a watermelon up to Lake Blanche was dumb, this is just braindead. I love watermelon as much as the next guy, but I wouldn't want it on my back for a day and a half and carry it all the way to the summit!

And of course, Diet Coke Lady (we all know one of those, I'm sure) decided to bring not only her Soccer-Mom Drug Of Choice, but a lime for that aspartame cocktail. But of course, both of these items pale in comparison to the fact that she packed a (glass) DRINKING GLASS to consume it with. 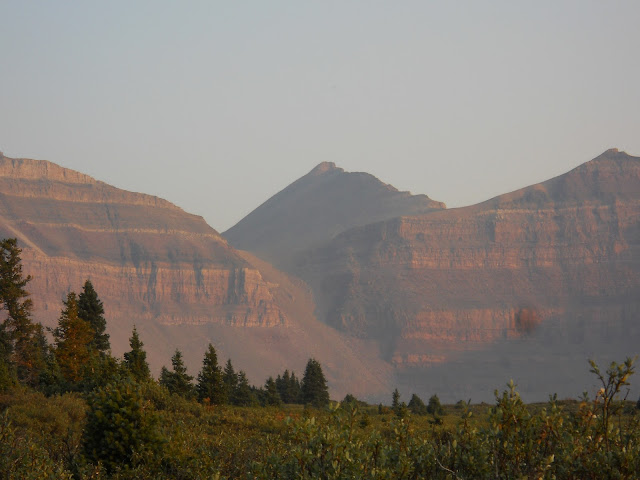 Kings Peak, center, with that brutal stretch of Anderson Pass below it