After leaving Kings Peak, I headed north to the Tetons. By time I got there, I was just about ready to throw my dad’s GPS in Jackson Lake. It sent me on an unnecessary detour and told me to turn down roads that didn’t exist. I eventually just turned it off because it was doing more harm than good. And of course I didn’t think to buy an actual road atlas beforehand (yeah, I know, 21st century kids these days, yadda yadda), so I ended up navigating the next 1800 miles using road signs and my intuition. Oops! 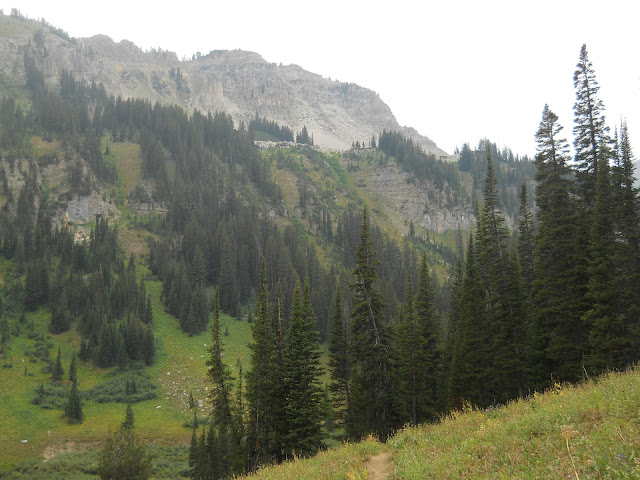 So between a malfunctioning GPS and a road closure due to bear (!) activity, I didn’t get my backcountry permit and hit the trail until right around sundown in the Tetons. I did discover, though, that hiking at night can be really spectacular. I turned off my headlamp off at one point and just took in the night sky. I was about 1500 feet above Teton Village, WY and saw just a few glittering lights below with a really clear, dark sky above.
In less idyllic news, I managed to scare a skunk on the path. Thankfully, he chose the “flight” option instead of the “fight” option, and for that I’m quite grateful. I also caught a deer in my headlamp and managed to count all 16 points of his rack while he stared at the light, transfixed. I finally made it to my camping zone around 11PM and turned in for the night. Thankfully, I kept my water bottles away from my tent; a bear had clawed up my water bottle and managed to slightly puncture my Camelbak during the night.
The next day was just exhausting. I didn’t get on the trail until about 9AM. I hiked through Open Canyon, over Mt Hunt Divide (9,600’) and down into Granite Canyon. I didn’t get on the trail until 9AM and stopped already by 6PM; I needed a short day to recover from what had been three intense days in a row. I saw two people at lunchtime that day, and that was it. The trail was simply desolate. 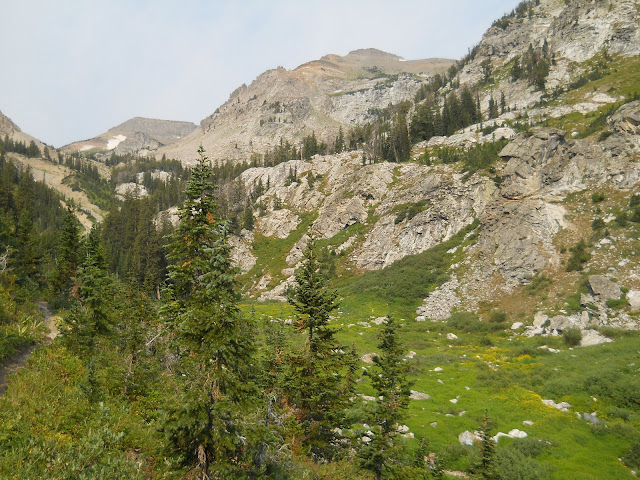 The next day was a bit schizophrenic. I woke up to sprinkles and decided to pack up and hit the trail to keep me and my gear from getting soaked. It rained off and on all morning. I passed Marion Lake and over Fox Creek Pass, both of were beautiful (and would have been more so, had it not been gray and/or raining) and dropped down into Death Canyon. No, I didn’t die. Right around that time it cleared up and the sun came out. Within a few miles I had stopped shivering and started sweating. It also made a difference that I had dropped 3000 feet in elevation. I didn’t stop all morning because it was raining, so I was at where I had planned to camp by 2:30PM already. Since the weather was supposed to be iffy the next morning, I decided to hike out. I spent that night in the National Forest immediately to the west of the park. The sunset over the Grand Teton is quite spectacular. 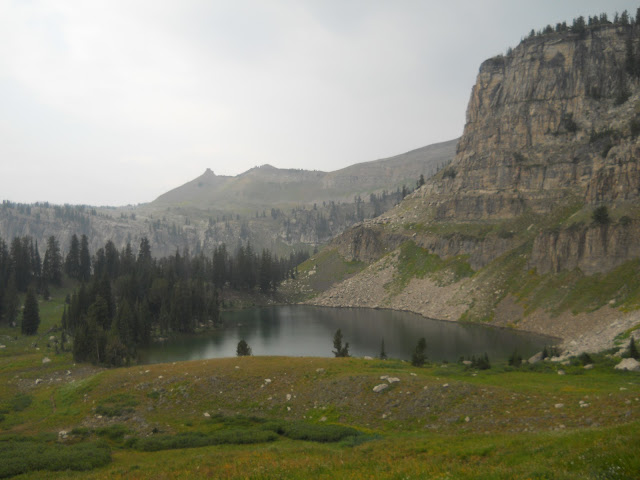 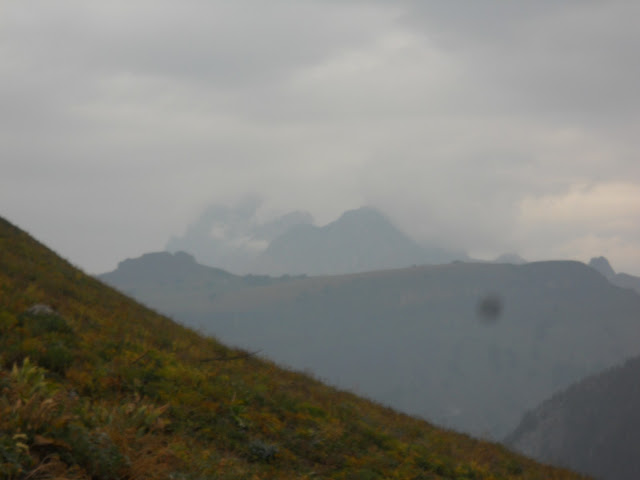 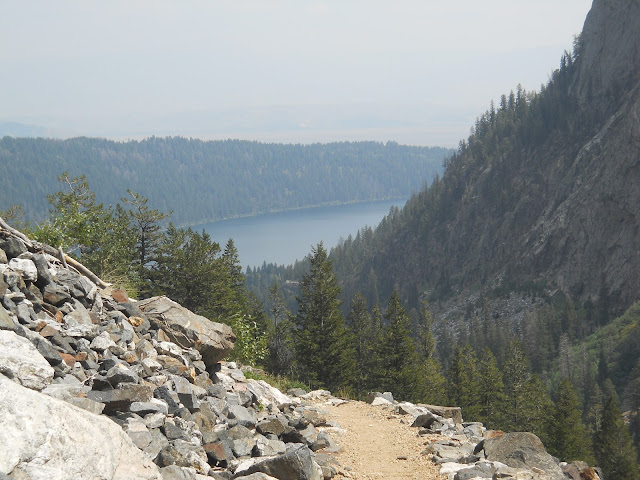 The next day dawned with not a cloud in the sky (it just figures) and I got up leisurely late. I drove northward along the Teton Range, past Jenny and Jackson lakes and arrived at the south entrance to Yellowstone around mid-afternoon. That's the end of my Teton adventure, but there was more spectacular fun to be found in Yellowstone. But of course no post would be complete without the Utterly Impractical Hiking Item Of The Week. Sadly, there weren't any morons to laugh at on the trail, but I do have an entry in the Colorful Characters Series. After the sun came out as I hiked down Death Canyon, I came across a crew of masons (the stone kind, not the Free kind) doing some work on the trail. At that point I hadn't seen as much as a tent, much less a human, in 24 hours, and was willing to talk to anything that had 23 chromosomal pairs. So I come across this guy and he has cataracts so bad I have no idea how he can even see, and ONE TOOTH. Think Larry the Cucumber except with white whispy hair. I've got to give him credit though; if I were in that kind of shape I probably wouldn't be inclined to hike 5 miles in the backcountry, do hard physical labor all day, and hike out. 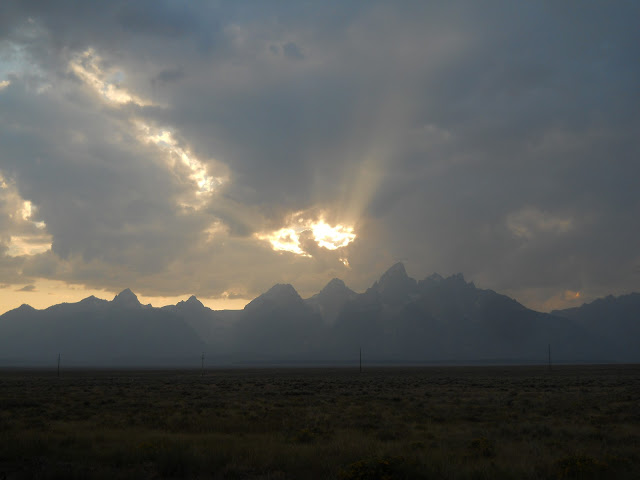 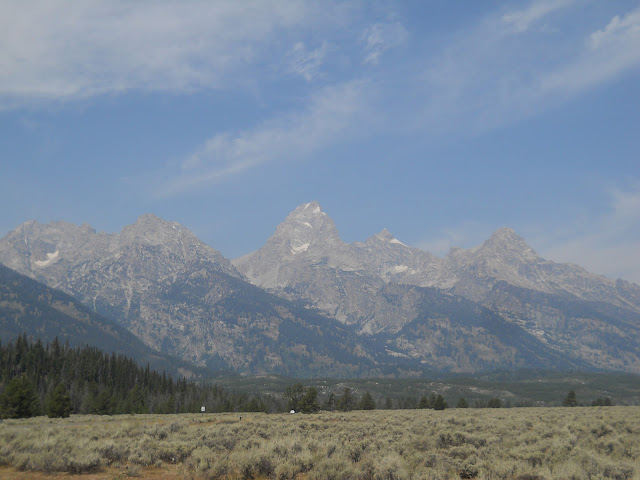 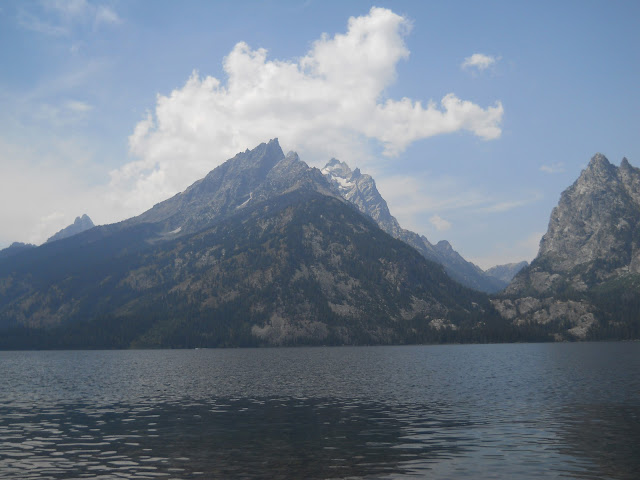 Whenever I get around to it, Part 3 will include Yellowstone and various sculptures in South Dakota.