Finally! The summer is a very short season in the high country. The higher elevations are just now becoming passable, and in a mere two months, the first snows of winter will shroud the mountains for another year. I need to take advantage. 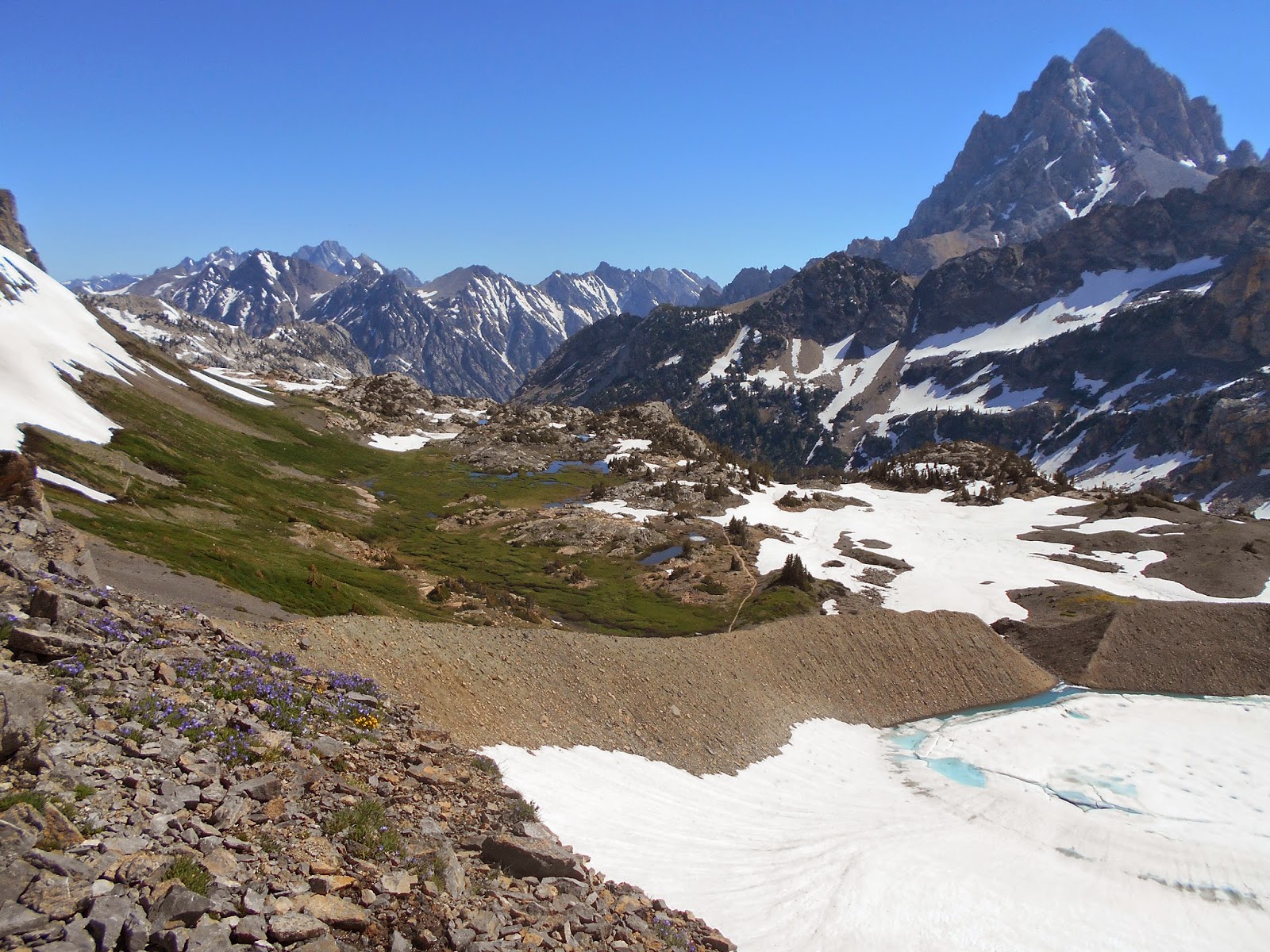 Two years ago, I spent the summer in Utah, interning at what became my current job. On the way back to Michigan at the conclusion of the summer, I stopped in the Uintas to hike Kings Peak, and in the Tetons to do a few days of hiking there as well. I only spent a couple days in each place, yet it was sufficient to captivate my imagination. I wanted to hike both ranges again.

My buddy Corona Sam (whom I hiked with through the Mid-Atlantic on the AT) had mentioned that he wanted to do the Uinta Highline Trail this summer. I had also put the UHT on my bucket list following the aforementioned summer of 2012. Corona, along with Utah Sherpa and Grizzly (both AT veterans from the past couple years) is retired, so they very graciously agreed to plan the hike around my vacation schedule. But first things first – we were planning to start the hike on a Tuesday, and I had four days free (Independence Day fell on a Friday this year). What better way than to spend them hiking the Teton Crest Trail?

The Teton Crest trail runs about 40 miles (my TCT was a bit longer, due to off-trail travel) from Teton Pass in the south, to the mouth of Paintbrush Canyon in the north. Over that stretch, it traverses six mountain passes, two above 10,000 feet. The TCT is consistently viewed, along with California’s John Muir Trail, as one of the most beautiful hikes in the country.

I drove up to Jackson, Wyoming on Thursday after work and bedded down for the night on what I thought was Forest Service land. The park rangers who woke me up in the middle night informed me otherwise; camping is allowed only in designated campgrounds or backcountry sites within the park. The next morning, I arrived at the ranger station several hours before it opened in order to be first in line to get a permit, which can be hard to get during the holiday weekend. I secured my permit, drove back to town to buy a cheap-o sleeping pad (the one thing I had forgot to pack in my haste!) and drove to my destination trailhead. From there it was a couple hours of hitchhiking to get to Teton Pass, where I would start the hike. Six hitches later, I started hiking a little after midday. 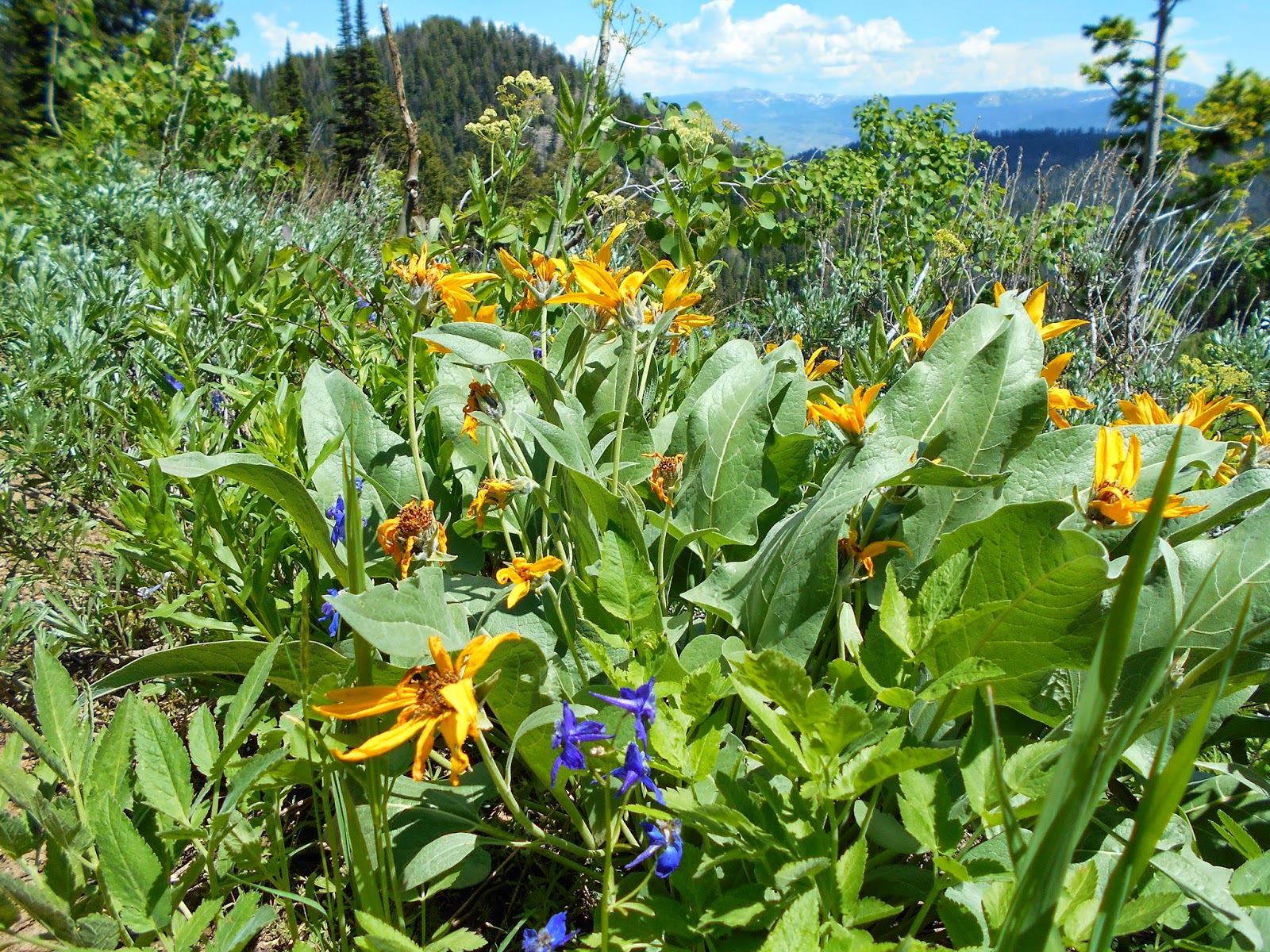 The first part of the trail was fairly mellow. It was still beautiful, but it was not the jagged, bare rock I had expected from the Tetons. I picked my way through the overgrown and seldom-used trail, retreating below tree-line for a couple hours to avoid a mid-afternoon thunderstorm. I camped just inside the park borders at the top of Granite Canyon. 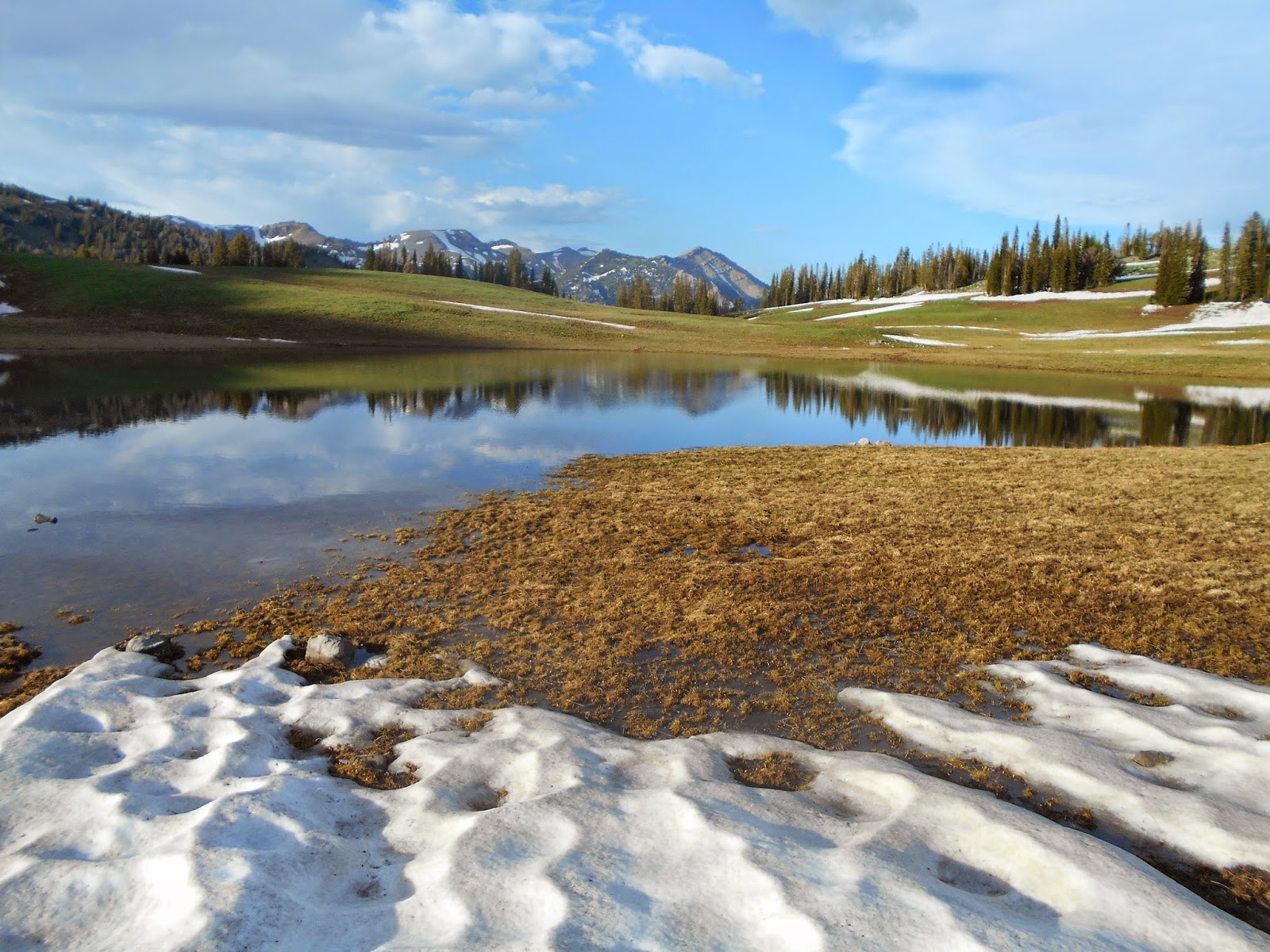 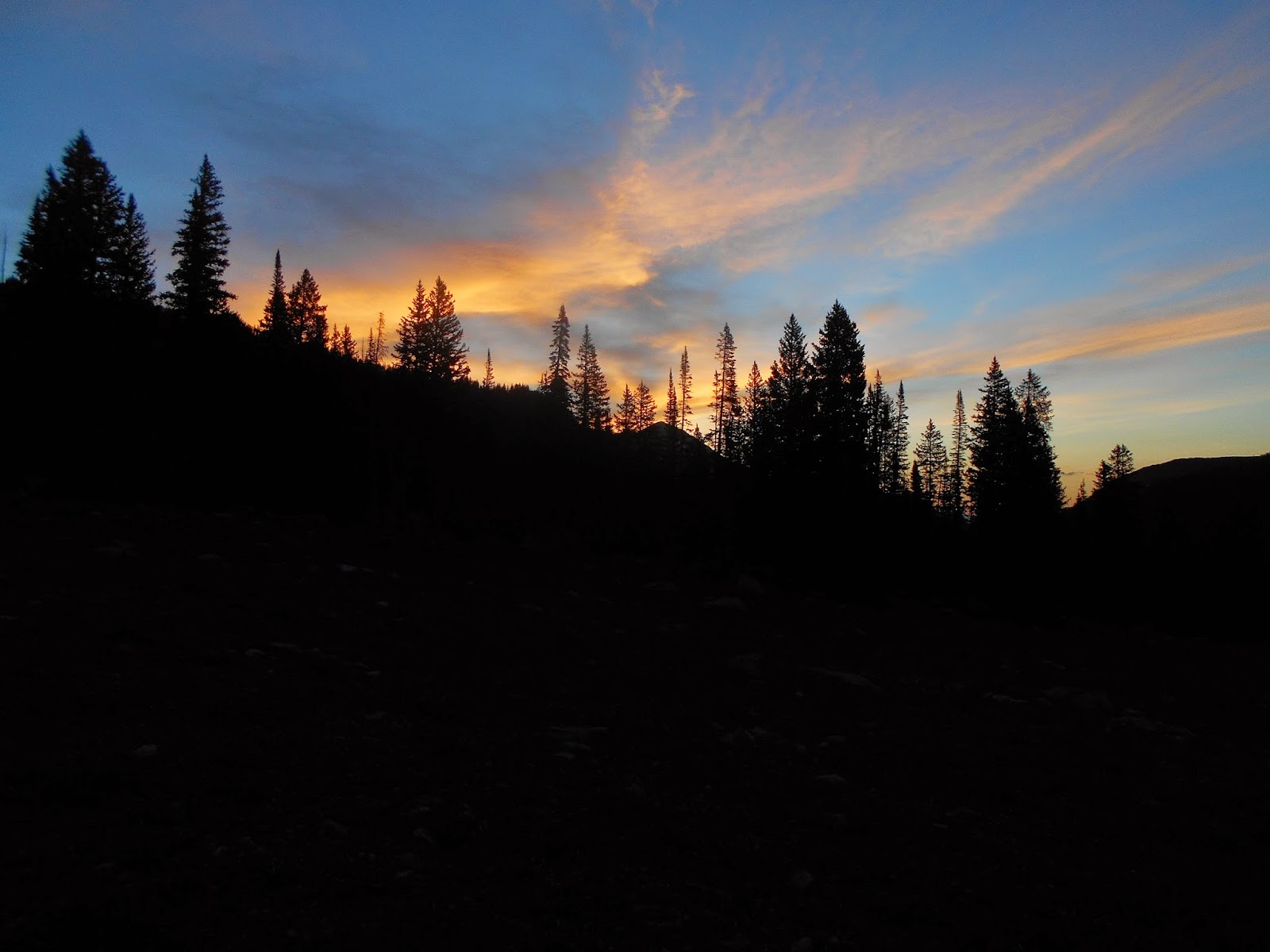 The next morning, I climbed out of Granite Canyon, past Marion Lake, and over Fox Creek Pass. I had been on a two-mile stretch of this trail a few years prior, and it was interesting seeing the landscape covered with snow. What a difference a month or two can make! From there, I stayed high on the fantastic Death Canyon Shelf, which overlooks Death Canyon several thousand feet below. On the shelf, I saw my first views of the three Tetons (South, Middle, and the Grand). I also ran into a very interesting backcountry ranger named Goldie. He provided me some good intel about a few alternate routes I could take to avoid some gnarly snow travel. I stayed a couple hours on the shelf, eating lunch, before dropping over Mt Meek Pass into Alaska Basin. 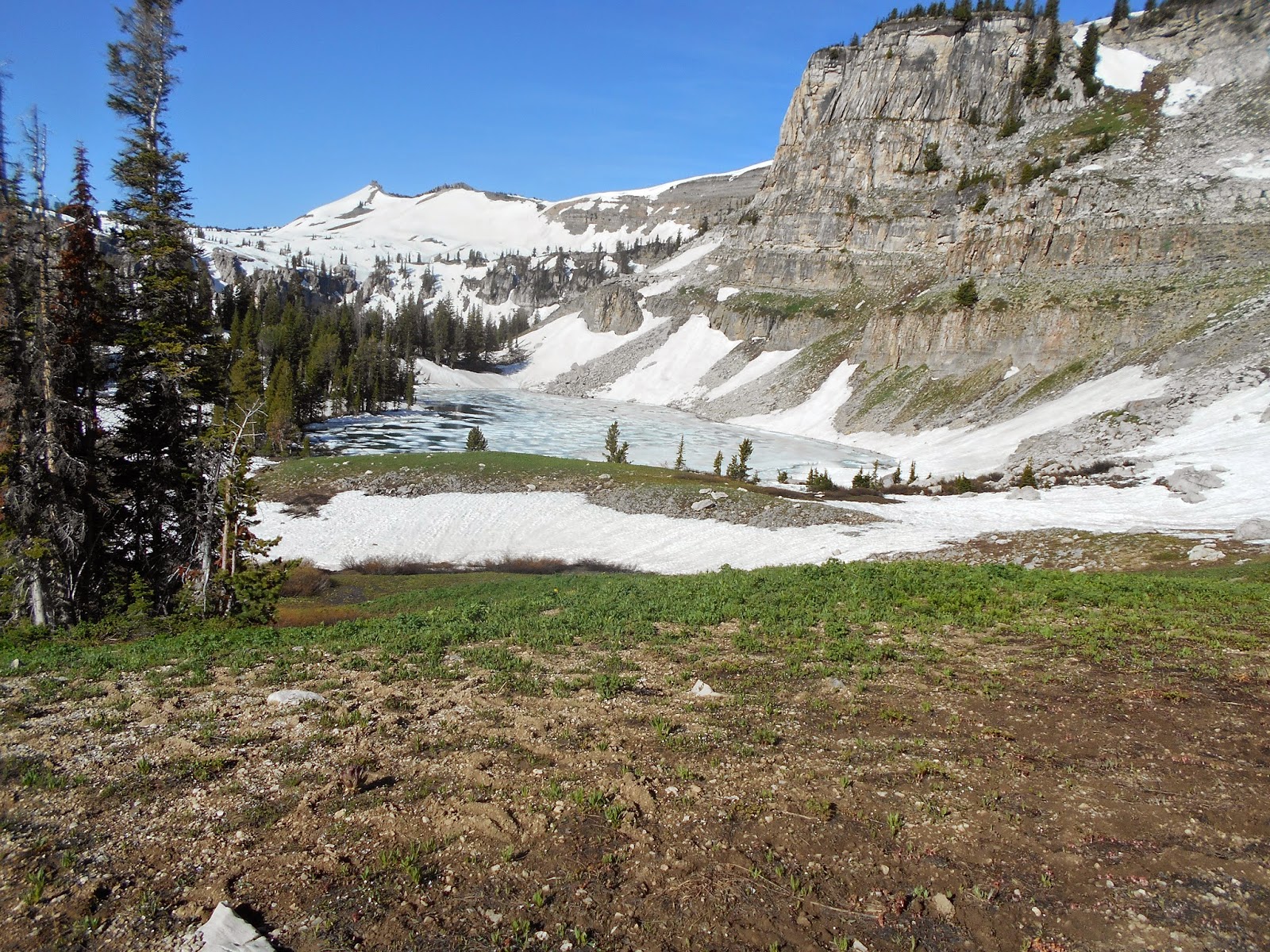 Alaska Basin is a well-named place. Although it is a wedge-shaped bowl with western exposure, it is high, and ringed by peaks and ridges. The entire basin was still buried several feet deep in snow. I managed to find a small snow-free spot to camp for the evening, but it was no bigger than the area of my groundcloth.

The next morning, I circled the perimeter of the basin, in hopes of avoiding a stream crossing that one very rattled couple had described to me the previous days as “impassible”. I did a few extra miles, but stayed high on the edge of the basin at 9600 feet. For the first time in my life, I saw a wolf, gliding silently across the frozen snow-crust several hundred feet below me. I didn’t have time to take a picture before he disappeared from view, and I’m almost glad. Some things can’t be photographed without being diminished. 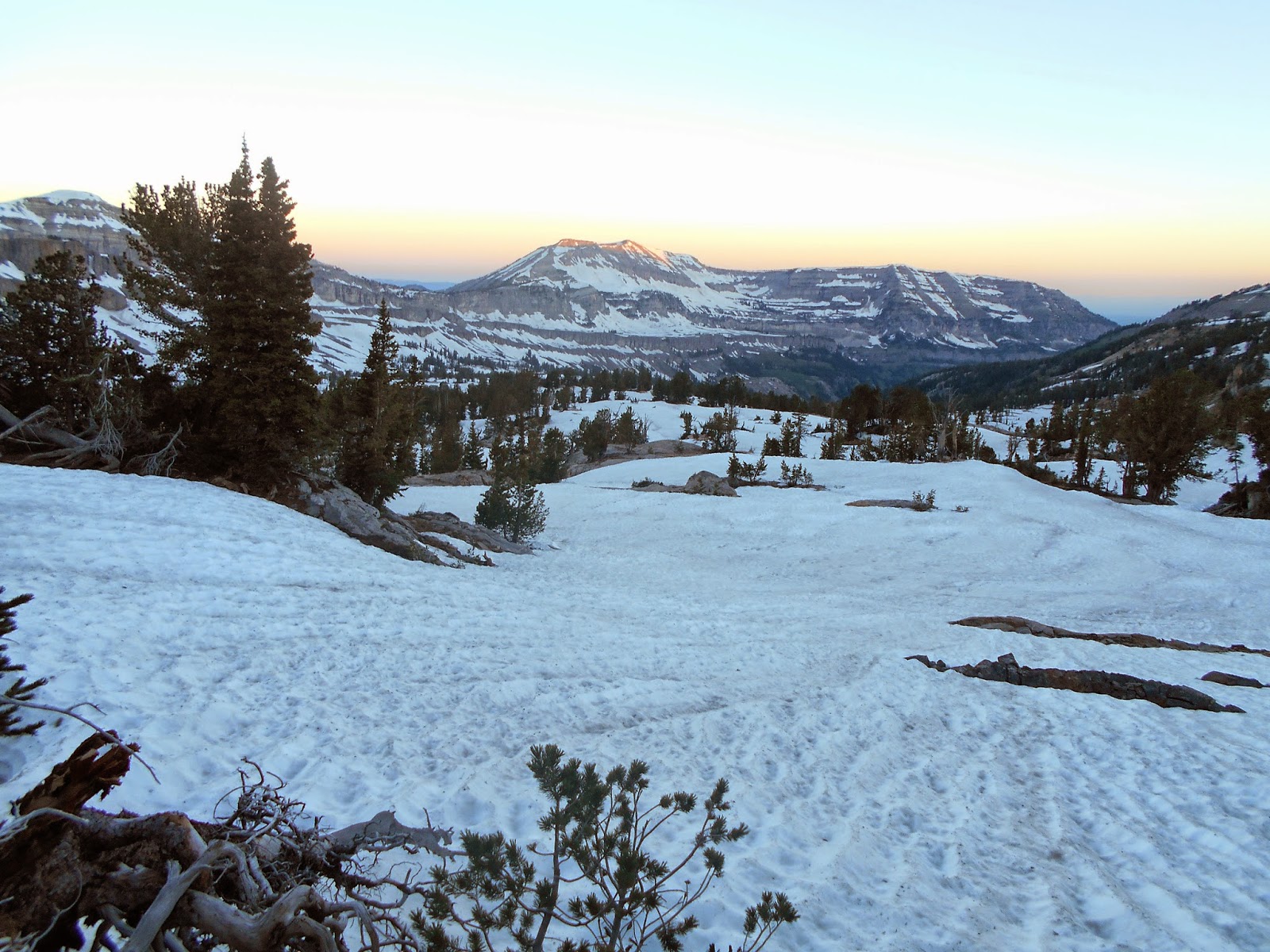 Navigation was challenging in Alaska Basin. The trail, probably obvious during the summer, was still a month away from being discernable. There’s something deeply rewarding, though, about constructing one’s own route, shooting a bearing, and using a topo map effectively to find the best way up and over the next pass. And the next pass was worth it.

After going down Mt Meek Pass and into Alaska Basin, I had lost my views of the Tetons, hidden by the northeast wall of the basin. When I summited Hurricane Pass, however, the Tetons burst into view. No longer small and distant as they were on Death Canyon Shelf, they were now the large, majestic, in-your-face beauty that I had expected prior to the trip, but couldn’t even imagine. I lingered atop Hurricane Pass – staring into the chilly Alaska basin, into the verdant Cascade Canyon, and at the soaring Tetons, which felt close enough to touch. 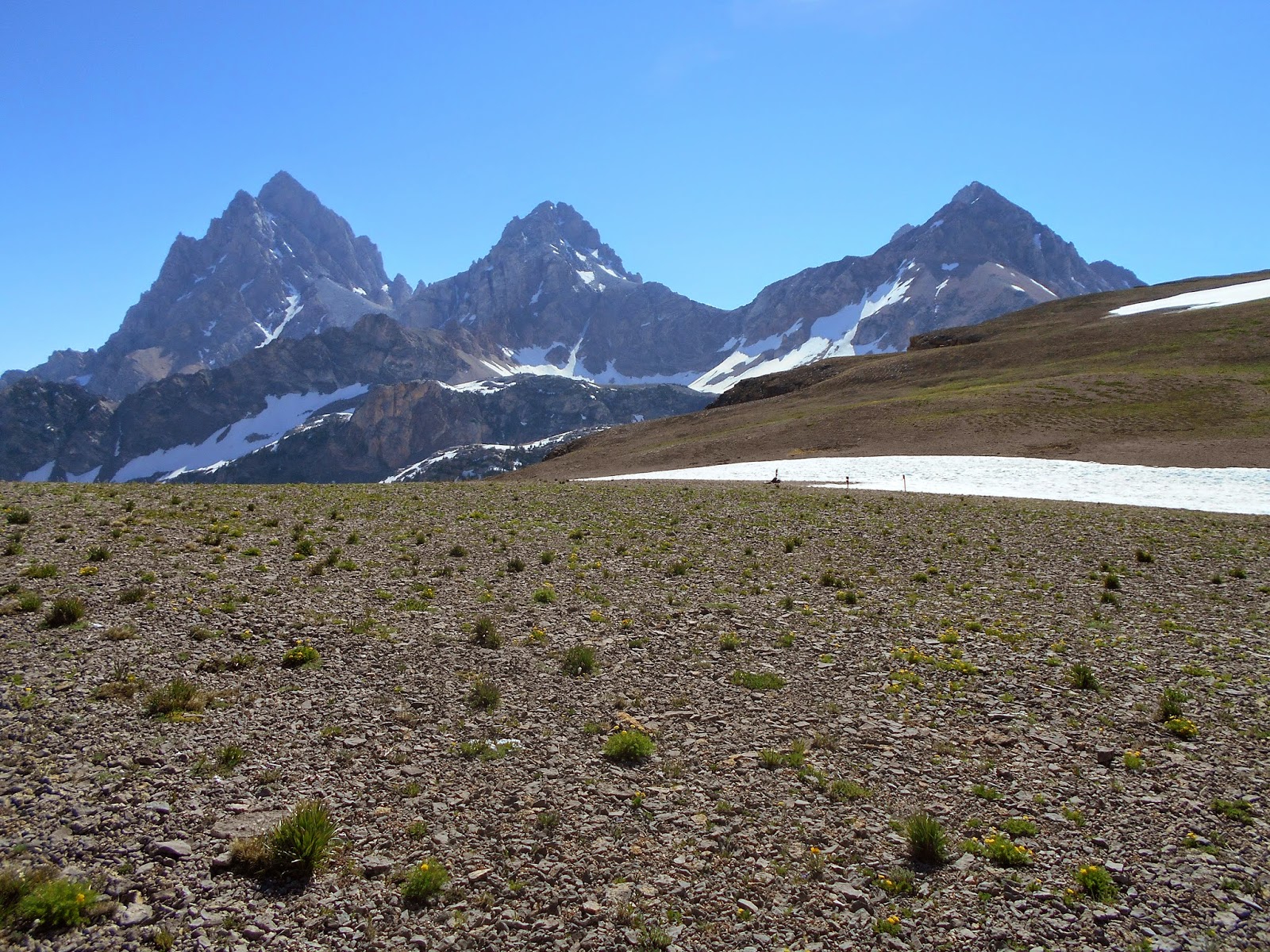 The snowy drop into Cascade Canyon was a bit sketchy, and I was glad to have an ice axe along. Lower Cascade was a very busy place. I saw enough Utterly Impractical Hiking Items to last a lifetime, as Cascade Canyon is a fairly easy hike when approached from the frontcountry. I camped in the north fork of Cascade Canyon, at what I thought was a perfect campsite.

Boy was I wrong! After setting up my tent, I walked a few hundred yards away to eat my supper and stash my bear canister for the night. But bears weren’t what I should have feared. As I arrived back at camp, a cute little marmot grabbed my trekking pole in its mouth and started dragging it away! I let out a demon shriek and chased the marmot away, grabbing my pole in the process. The beast had left a few teeth marks in the handle of my pole. Perhaps he was after the salt? I went to bed, grateful for a nice place to spend the night. A few minutes after dark though, I was awaked by a rustling at the edge of my tent. The marauding marmot was back. Again, I chased it away, this time with no further damage to my trekking pole. Fifteen minutes later, the creature returned. I’d had enough. I ran out of my tent and hurled rocks at the infernal rodent. I seized the ice axe in one hand, my bear spray in the other. I was going to teach this miserable piece of flesh a lesson.

Thankfully, reason prevailed. I was content to grab a stick and jab the hideous highwayman as he bristled in the bushes. At this point, I realized that I really could not win. I packed my stuff up and moved camp a half mile away, where I cowboy camped for the remainder of the night, thankfully without any further carnivorous rodent encounters. 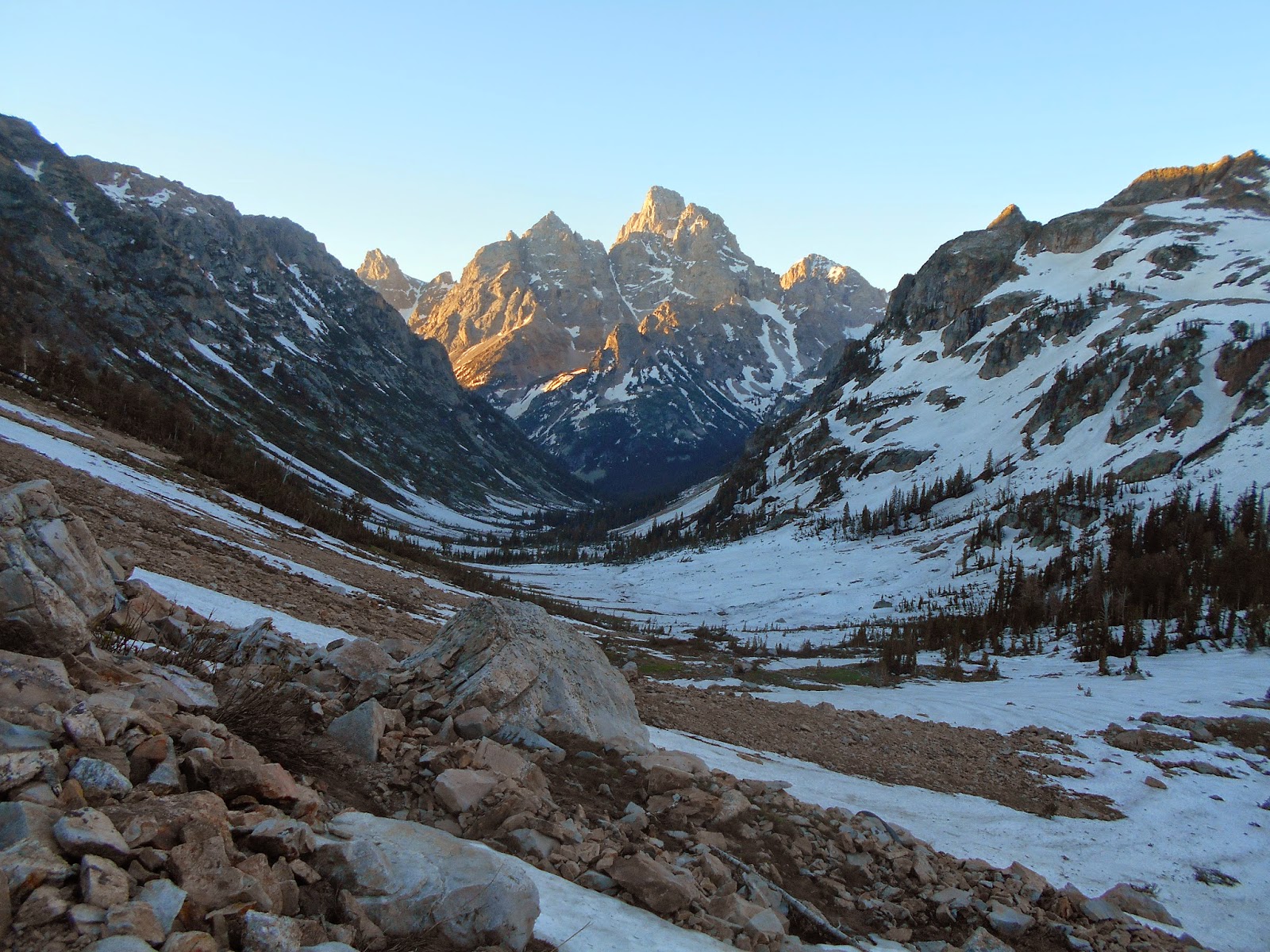 I got up early the next day. I had 14 miles to do, a challenging pass to climb, and four hours to drive down to Corona Sam’s cabin. I was hiking already by 5:15AM. After a couple miles, I reached the still-frozen Lake Solitude, where I began the ascent of Paintbrush Divide. I had talked to a couple of guys with mountaineering experience (possibly the first ones to go over the pass for the year) the day before; they told me that it was “rough” but doable, and that traversing it from west to east (as I was doing) would be the easier way. It quickly became apparent that Paintbrush was every bit as challenging as they said. From Lake Solitude, the trail ascended the side of a ridge. Theoretically, at least. In reality, there was no trail in many spots, and I had to traverse several steep snowfields, going sideways across a 50-60 degree slope. The ice axe became a necessity. I chopped steps in the icy snow where necessary. It took me perhaps 10 minutes to go 50 yards in the most treacherous spots. Thankfully, the trail looped around onto a south-facing ridge that gave me a few minutes of dry trail, and reprieve. I opted to scramble up about 500 vertical feet of boulders to avoid another section of nasty side-hill, and before I knew it, I was at the top of the pass.

Paintbrush Divide was simply outstanding. All around, jagged mountain peaks soared into the perfectly blue clear sky. Paintbrush Canyon, to the west, was still completely snowbound. Jackson Lake, and the Jackson Hole valley were visible in the distance. And I had to get down from the top of the pass. At this point, the trail was a just laughable thought; this was choose-your-own-adventure hiking at its finest. The only reasonable and safe way to get down from the pass was to descend a snow-slope several hundred long, which was probably on a 70° angle at its steepest point. Hiking down it would be a recipe for head-over-heels flailing. 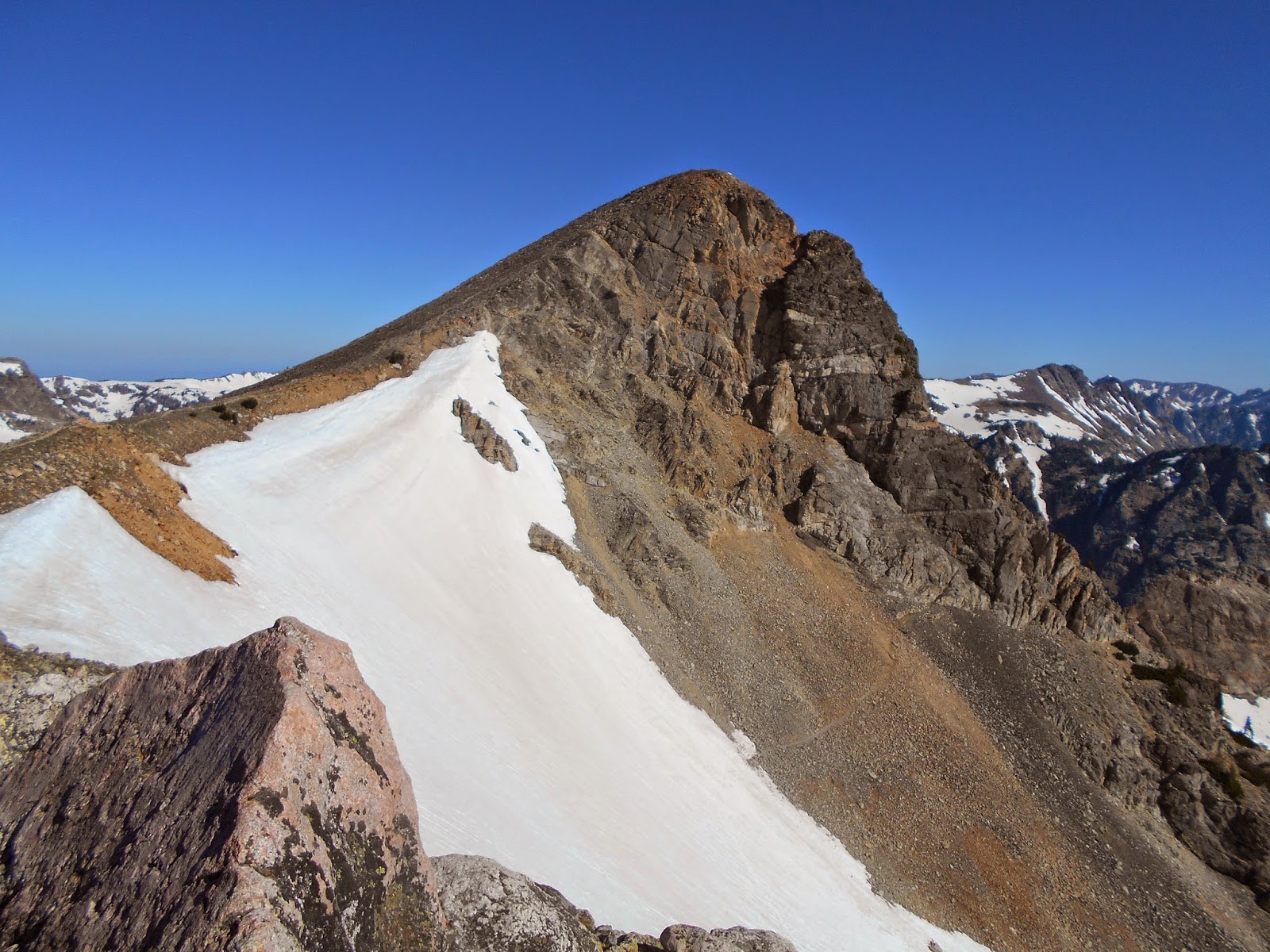 I self-arrested three or four times in my ride down the slope, just to keep myself from gaining too much speed. The thought of splattering my vitals all over a boulder just didn’t sound too appealing, plus I’d prove all the worrywarts right. Still, the ride was a blast, and a heck of a lot faster than trying to chop steps in the snow, or trying to follow switchbacks under ten feet of snowpack.

The hike down Paintbrush Canyon was so picturesque, it’s almost impossible to put into words. So I won’t. 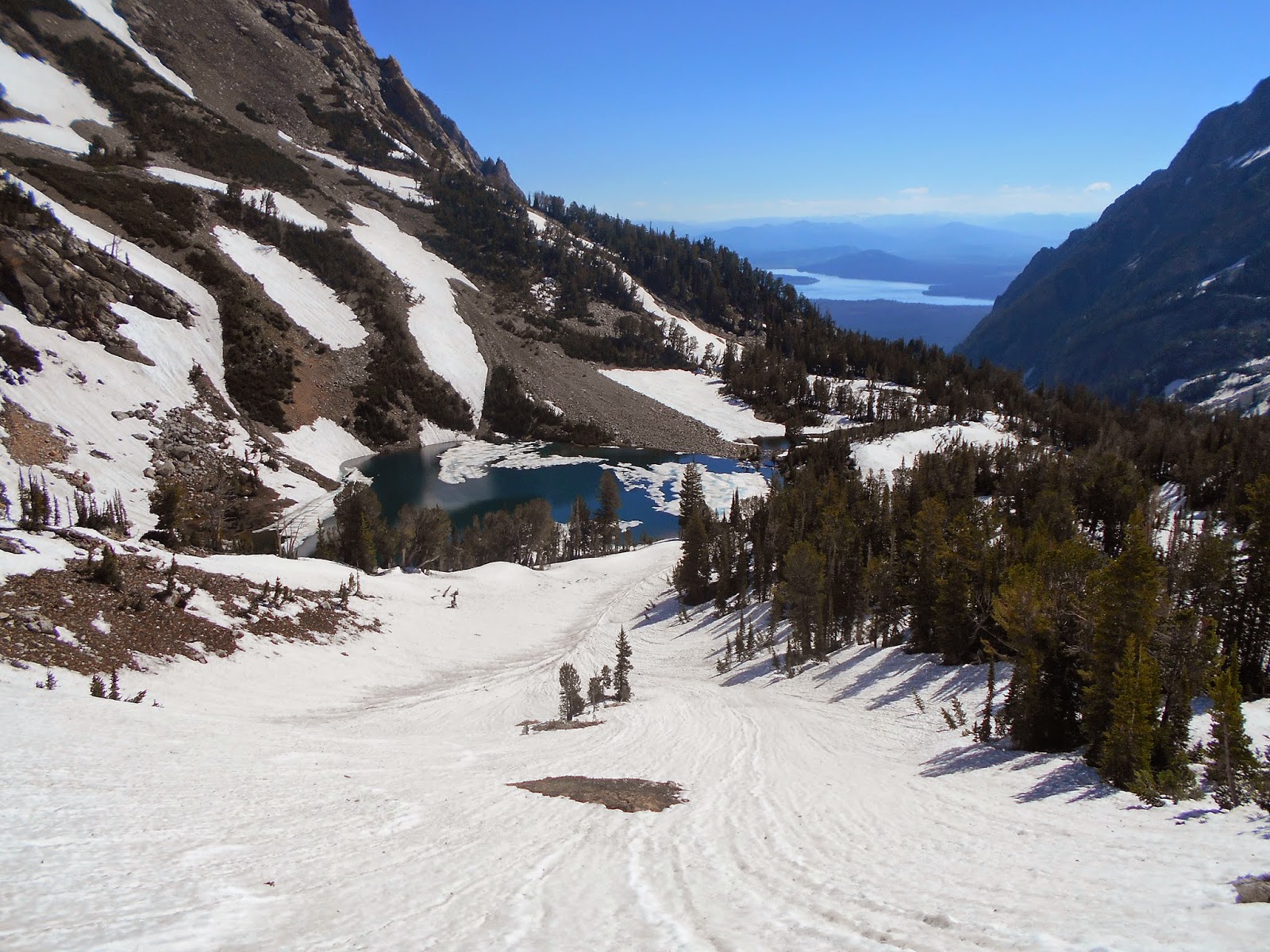 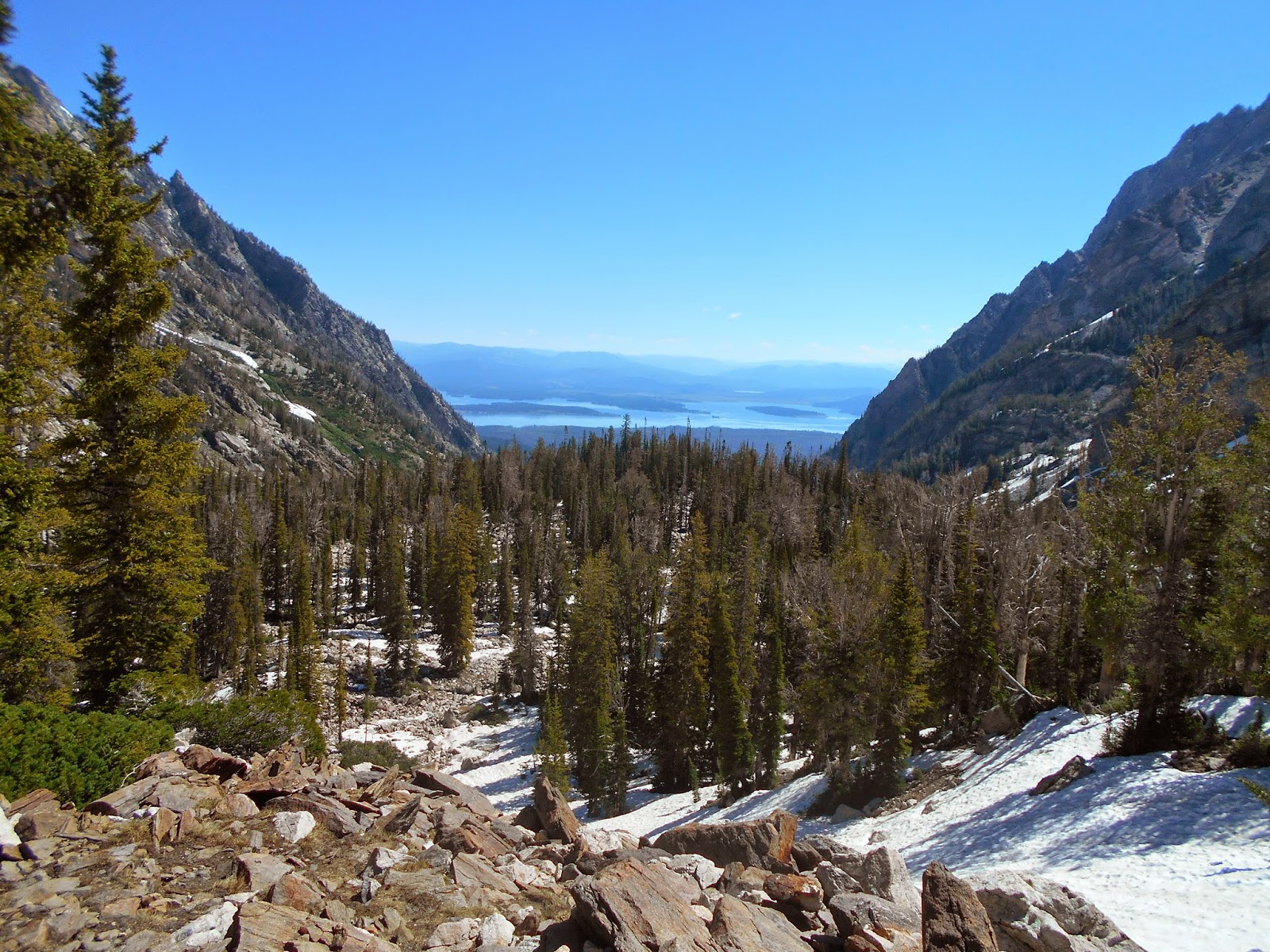 Once back at the trailhead, I dropped off the bear canister at the ranger station, hiker-trashed the Jackson Wendys (phone plugged in, a billion refills from the pop machine, general stink and grime), and headed south to Corona Sam’s cabin to start my next adventure. In related news, always check your coolant level prior to setting out on a road trip, especially if you have a small known leak. Failure to do so may result in you (1) overheating your car or (2) spending an hour in Green River, Wyoming refilling your bone-dry radiator, trying to prevent said overheating.

I finally arrive at Corona’s cabin around 8:30PM, where I ate supper, introduced myself to the two guys I hadn’t met before, and went to bed on a comfortable couch, rather than a crappy foam pad. The next day, we began the Highline Trail adventure… 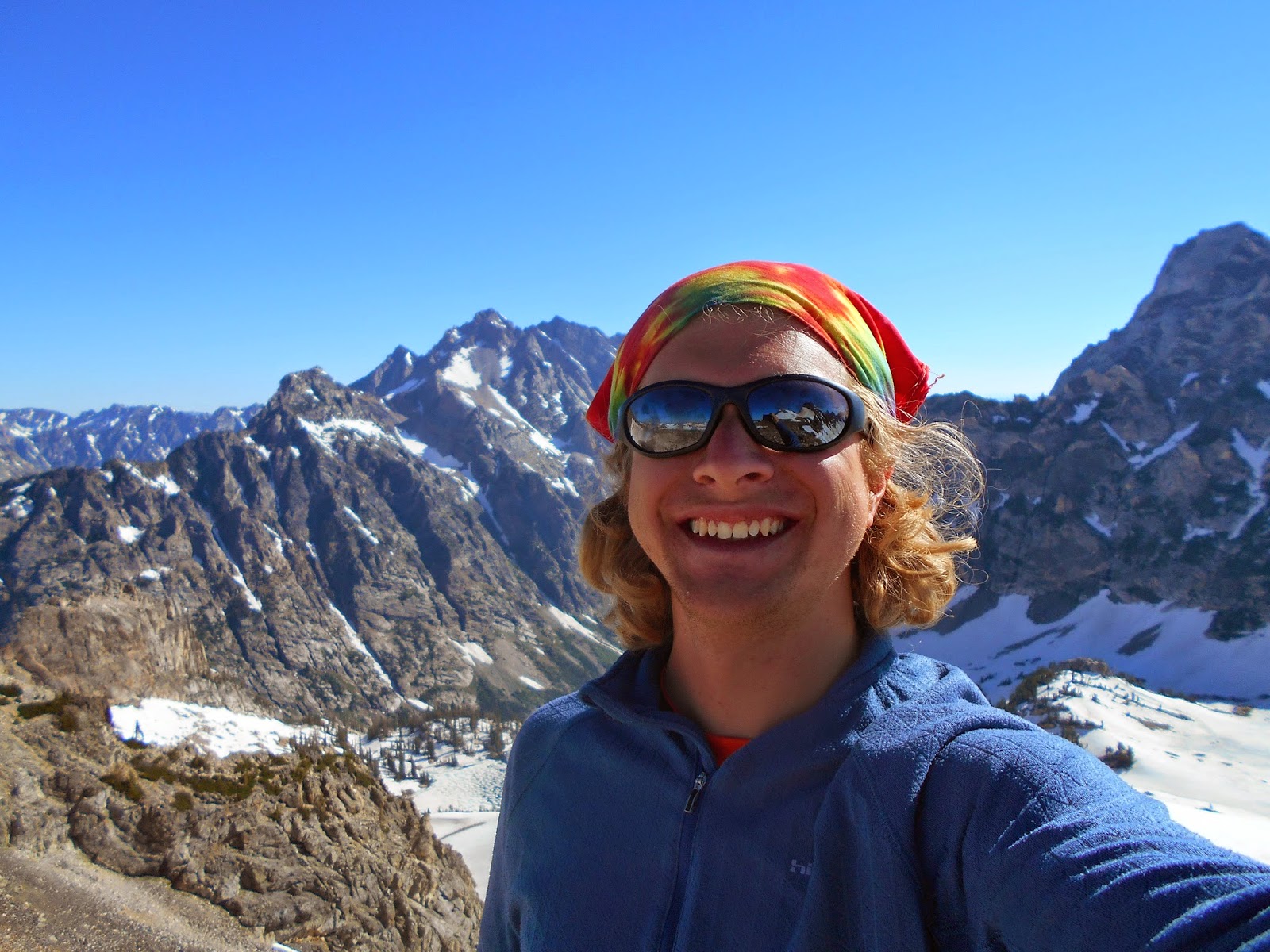