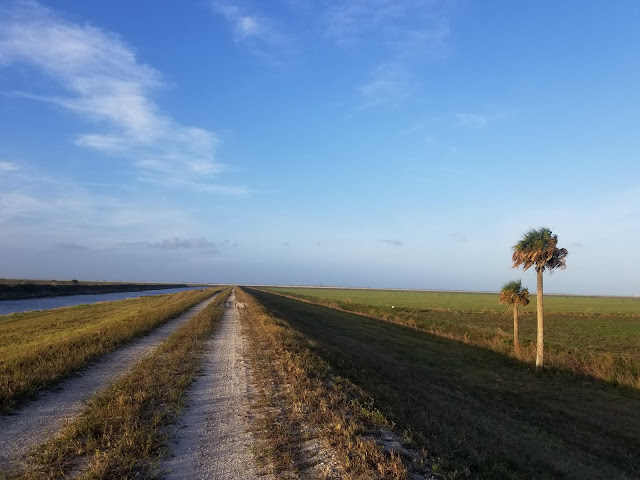 Well, that was jarring.

In early January, I boarded an airplane in the frozen upper Midwest and three hours later, landed in southern Florida. Since then, the temperature has never dropped below 70F, even in the middle of the night. I've only been on trail for a week, and I already feel grosser than ever before in my life. The tropics of South Florida are sticky, slimy, almost saccharine. What a wonderful climate to be a bacterium! 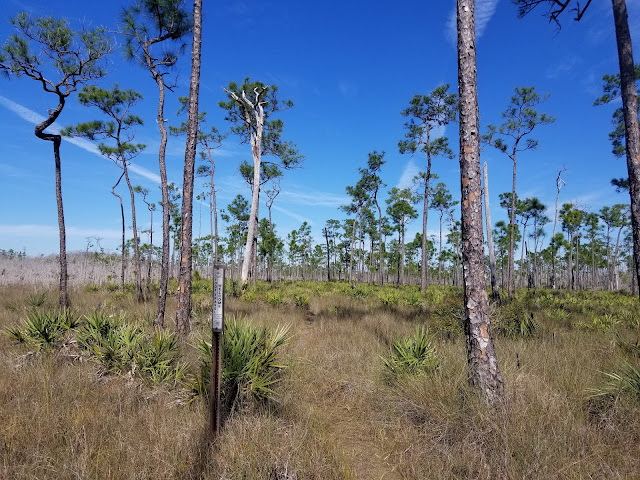 Calf-sucking Mud: On January 8, my good buddy Blue Moon dropped my off at a visitor center in Big Cypress National Preserve that marks the southern terminus of the Florida Trail. The FT doesn't go quite to the southern tip of mainland Florida, but only because that's all Everglades country, which definitely blurs the line between "land" and "water. And after all, who in their right mind would hike through a swamp?

You. You would. At least if you were hiking the Florida Trail. While Big Cypress may not be named "Everglades", it's very much still the same ecosystem. As such, there's a ten-mile stretch within the first couple days that is described (with more than a twinge of exaggeration) as "the toughest stretch of wilderness hiking anywhere in the United States". While I tend to think that whoever penned that statement needs to get out and do a lot more hiking, there's no doubt that it's difficult travel. 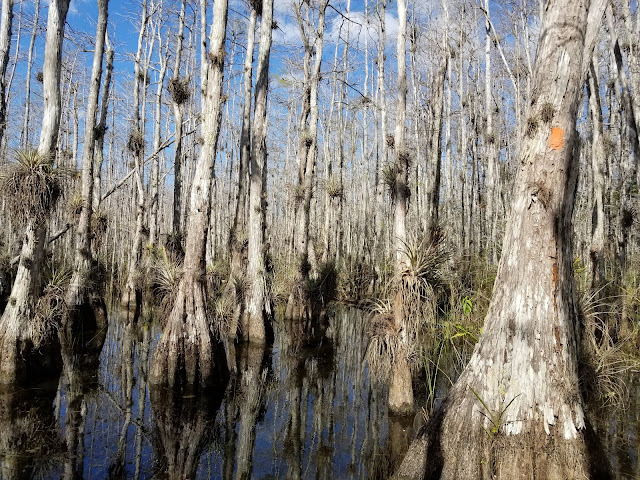 The entire stretch is underwater. I found the areas of deepest water to make for the easiest travel. While splashing through knee-deep water around trees and logs and roots isn't exactly quick, it's definitely preferable to the thick, gloppy, shoe-sucking mud that the shallower water is paired with. Extracting my foot after each step became a chore. Imagine hiking with 30-pound weights strapped to each foot. Yeah, good times.

But while it's easy to complain about swamp-sloshing, it was a really unique experience and one that I'll remember for a long time. Florida doesn't have any mountains - or even major hills, really - but the swamps make for a roughly equivalent obstacle. Big Cypress is reputedly the longest and toughest swamp section, but it sounds like there's a few more along the way to contend with.

Canals: After leaving Big Cypress behind, I traveled across a vast area of mostly farmland. That farmland is still in the swampy everglades ecosystem though, and stays dry enough to cultivate only through a massive waterworks project involving dozens (hundreds?) of canals and pumping stations. I walked for days atop dikes bordering canals. At one point, I walked due north for twenty miles, perfectly flat, perfectly straight. Progress is quick when everything you encounter is 3 mph terrain!

That easy walking atop the dikes does come with a couple downsides though. First, there's not a lick of shade to be found. As mentioned, South Florida has seen record high temperatures (85-90F) for much of the past week, and combined with lower-latitude sun intensity and 100% humidity, the result has been sweltering. Second, there's water everywhere, but it's all agricultural runoff - full of pesticides and who-knows-what. While it's certainly not the worst water I've ever drunk, it's certainly to be avoided if possible. 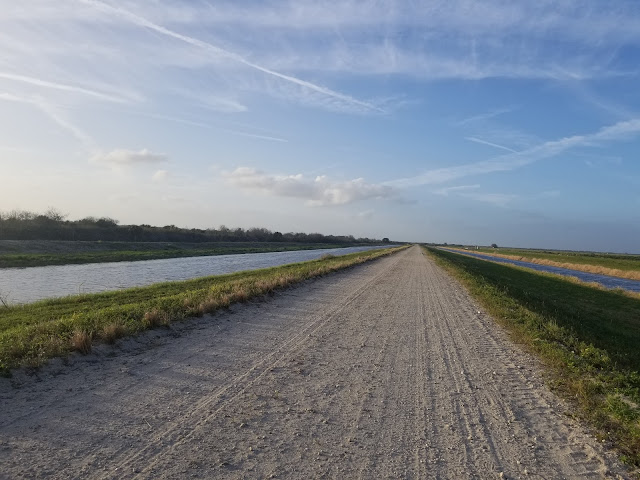 Caches: Thankfully, it's been pretty easy to avoid canal water thus far. There have been somewhat frequent outposts of civilization (towns, country stores, freeway rest areas) along the way where I can water up. In addition, the Florida Trail has a robust network of trail angels and supporters who have helpfully cached water at convenient spots along the way. Water caches as a rule cannot be considered reliable (and indeed, one of them was dry and another had only one gallon left), but it's always nice to draw nice clear water from a jug rather than ginger ale from alligator-laden ditches.

Oh, speaking of gators, I've probably seen at least a hundred, mostly laying in wait in canals or along the banks. As long as you stay comfortably above/away from them, up on the dikes, they're really no concern at all. But wow, have I seen some whoppers!

A friend remarked a while back that if we want to see the CDT completed, we should really rename it the "New Mexico Trail". All the state-specific trails that I've hiked thus far (Arizona Trail, Colorado Trail, Florida Trail, the exception being the mostly-imaginary Idaho Centennial Trail) have excellent networks of volunteers and a lot of civic pride behind the trail-building and maintenance efforts. It's really cool to see locals throwing themselves into a project and obviously taking a lot of pride in it. Go Floridians! 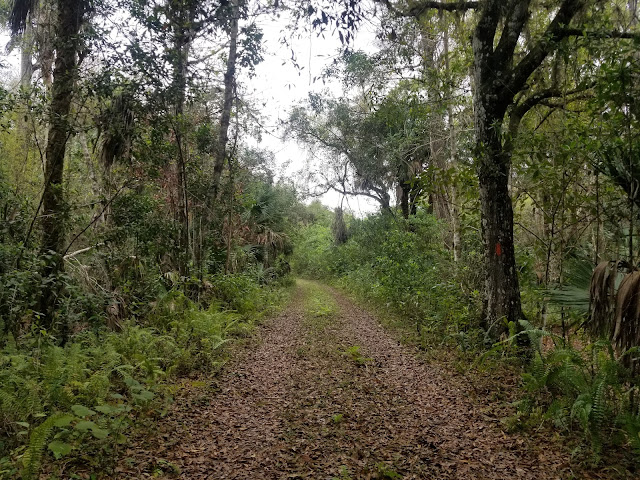 What's Next: Walking around the perimeter of Lake Okeechobee at the moment (which claims to be the second largest lake entirely within the United States - which okay, whatever. You're still not a Great Lake). That's all on pavement, which is unfortunate as my shoes are pretty close to dead and offer no cushion anymore. Then things get a little more remote for a while. 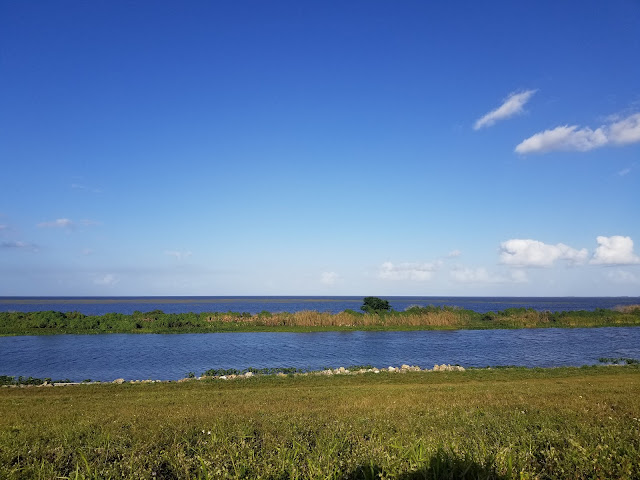