From Whence Did the Grinch Steal Christmas? 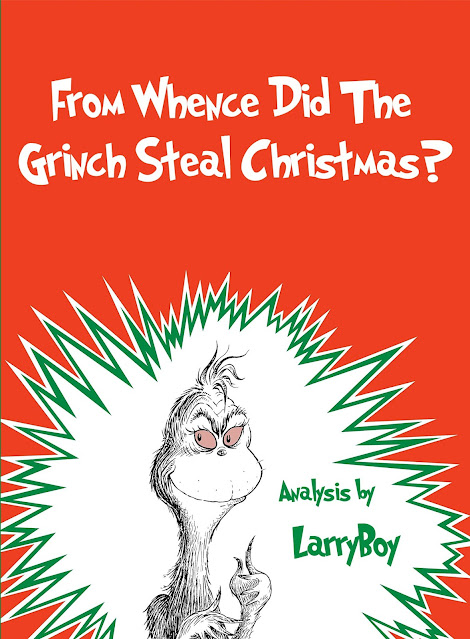 Like many children, I grew up reading Dr. Seuss's holiday classic, How the Grinch Stole Christmas. Seuss (also known by his birth name,Ted Geisel) spins the heartwarming yarn of an irascible hillside hermit who tries to steal Christmas from the neighboring town of Who-ville. But his heart "grows three sizes" upon learning the true meaning of Christmas, and he abandons his Grinchy ways, even sharing in the town's celebration himself.

When I got older and developed a quasi-obsession with mountains and wild places, I noticed that there really aren't that many places - anywhere on this planet - that fit Who-ville's locale as described in the book. I began to wonder - where exactly is Who-ville?

TL;DR: With a reasonably high degree of confidence, I believe that Glacier View, Alaska is the only plausible match for the fictional town of Who-ville.

A crash course on the Grinch, in case your childhood was sad and stunted:

The Grinch, a grumpy green recluse, lives in a cave in the mountains north of a village called Who-ville. The Grinch's general misanthropy is manifest most overtly in his abhorrence of the Whos' annual Christmas celebration. Having putting up with their singing, feasting, and general merrymaking for "fifty-three years now", the Grinch decides, one Christmas Eve, to steal their holiday accoutrements while they're all sound asleep.

After dressing up as Santa Claus and disguising his dog Max as a reindeer, the Grinch rides a sleigh down into town and, sliding down each chimney, systematically burglarizes the Whos' houses, stealing their gifts, foodstuffs, decorations, and Christmas trees. He's spotted only once - by a two-year-old, Cindy-Lou Hoo, who believes he's Santa Claus. The Grinch prevaricates, telling the child that he's taking the tree back to his workshop for repairs. He then dispatches her back to bed. 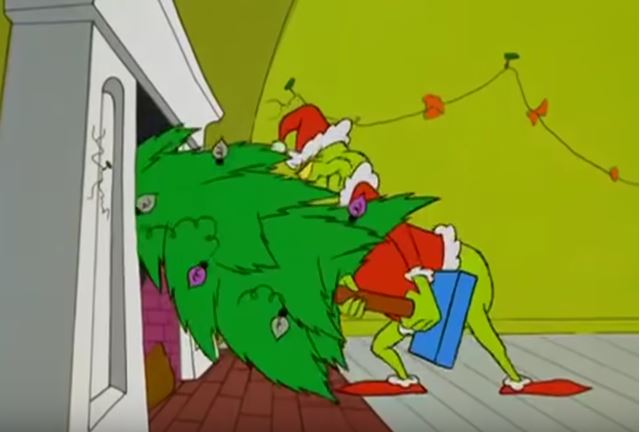 The Grinch shoves the Christmas trappings up the Whos' chimneys and loads it all onto his now-overflowing sleigh. With much protestation, Max pulls the sleigh thousands of feet up to the peak of nearby Mt. Crumpit, where the Grinch plans to dump the cargo over the side of a cliff. Before completing his crime though, the Grinch pauses to observe the reaction of the townspeople, who are just now waking up and realizing that their Christmas has been stolen. But to the Grinch's horror, he hears not weeping, but singing! Despite their lack of gifts, decorations, or food, the Whos are celebrating Christmas all the same. The Grinch concludes that Christmas must mean "a little bit more" (though exactly what is not specified). His heart changed, the Grinch rides back down the mountain into town, bringing back everything he had stolen. The Whos magnanimously accept him, even granting him the honor of carving the rare roast beast. 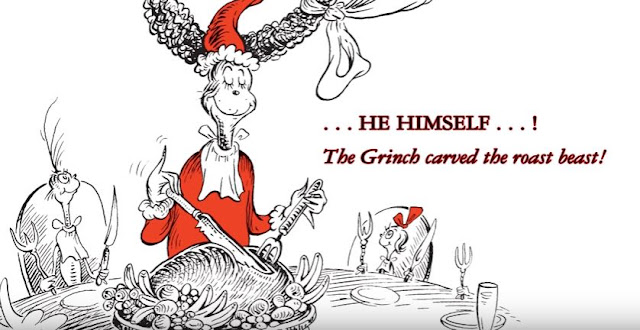 Unsurprisingly, Hollywood has done several re-treads of the original Grinch story. Not all of them should be considered "canon", though. For example, How the Grinch Stole Christmas! (2000), starring Jim Carrey, contains an elaborate backstory for the Grinch's malfeasence featuring childhood bullying and unrequited love. None of this is even alluded to in the original. For the purposes of this analysis, we will take two sources as canon:

I see these two resources - and only these two - as canon because they're the only productions to which Geisel actually contributed. All other adaptations and remakes may be entertaining, but they're not authoritative.

1. Who-ville is located in an anglophone country. We know this from Cindy-Lou's name, as well as the fact that the Grinch speaks English in rhymes and anapestic tetrameter - something that would be highly unlikely if Geisel were translating from another language.

3. At least 42 people live in Who-ville. Forty-two figures are visible, joined hand-in-hand, during the song that stirs the Grinch's cold heart.

4. Mt. Crumpit is located to the south of Who-ville. This is admittedly an inference, however it seems to follow naturally from the way that animated features are typically shot. We know from #2 that the Grinch lives north of town and we see him whizzing down to Who-ville (before he steals Christmas) going from left-to-right across the page/screen. This means that the camera is pointing east as he journeys south through the frame.

After stealing Christmas and begins climbing up to Mt. Crumpit, he continues to move left-to-right across the frame - presumably using the same camera angle. And upon his repentance and his return to town, he now moves from right to left across the screen - now going northbound. It seems that in all of the "travel" scenes, the camera is pointing east. 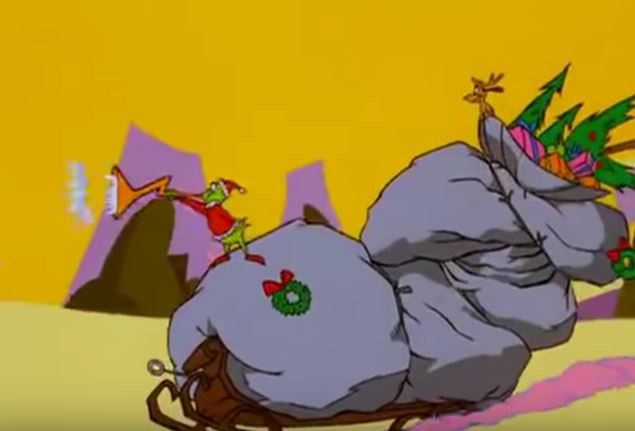 6. Mt. Crumpit lies within ~30 miles of Who-ville. The book says that it was a "quarter past dawn" when the Grinch finally made his getaway. The movie slightly contradicts this - a "quarter of dawn", meaning a quarter before dawn. In either case, the Grinch certainly couldn't get too far - perhaps a couple hours - before the Whos woke up and discovered that their Christmas had been stolen.

So, with Max pulling the sleigh, how far could they have gotten? The answer, of course, is "almost nowhere" - ten thousand vertical feet in two hours is pretty much unthinkable for any wingless animal. However, to be charitable, we'll use typical dogsled speeds - 10-14 mph - and assume that the Grinch could have made it at most 30 miles. Sure, Max wouldn't be equal to an entire team of sled dogs, especially with his gigantic load. However, he certainly did have adequate motivation, in the form of the Grinch's cracking whip.

7. Who-ville has snow on the ground, in town, at Christmastime. This is shown in both the book and the movie. Using the Principle of Mediocrity,a sort of probabilistic argument used in speculative cosmology and philosophy, it makes most sense to assume that this is an ordinary year and that Who-ville generally experiences a white Christmas. 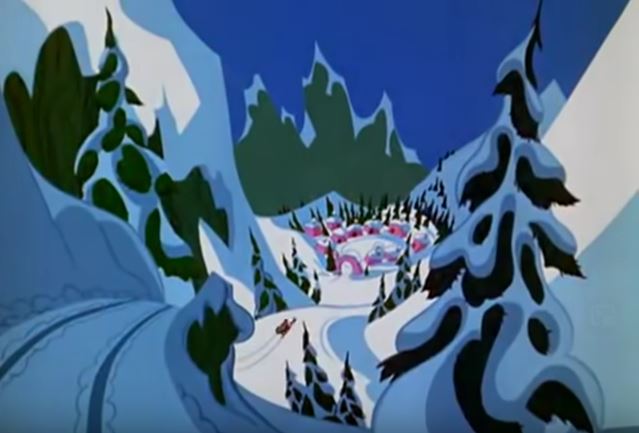 Almost immediately, we notice that the story must be set in either the United States or Canada. There are plenty of places that speak English, but most of them don't have mountains high enough (i.e the UK) or Christmas snowfall at elevations where people live (i.e. Australia). We could consider nations like Pakistan, which certainly has mountain/climate factors working for it, but while English has official-language status and is widely spoken as a second language, virtually nobody speaks it as a first language - muttering to themselves as the Grinch does.

We therefore narrow our search to the US and Canada. A number of places look initially promising, but turn out to be duds. For example, Lone Pine, CA is out - though Mt Whitney towers more than 10,000 feet above town, it's rare that snow falls in the town itself. Farther north, wintertime snowfall continues to be a problem. Greenwater, WA lies within the requisite distance of Mt. Rainier, but once again, it doesn't typically see snow in the winter. Put simply, there are very limited number of towns where you can climb 10,000 feet in thirty miles and get wintertime snowfall at all elevations. For that, you have to go north - very far north.

Farther north though, towns become a lot more infrequent. The majority of the high peaks in the Canadian Rockies lie within vast areas of National Park land or de fact wilderness. The coast ranges of British Columbia are even more desolate - there are a few towns, but in all cases, the towns are a little too far away from the peaks, or are in the wrong direction. The ranges here run in a generally NNW-SSE direction, which means that the high peaks are either east or west of the towns, not south of them.

That brings us to Alaska. The land of the midnight sun is sparsely populated, but does have a few hardy hamlets worth discussing. Helpfully, many of the ranges in southern Alaska run east-west, which means that towns are north or south of the peaks. One of those ranges is the famous Chugach Range. It's one of the snowiest ranges in the world, and tops out at more than 13,000 feet.

Paralleling the Chugach to the north is the Talkeetna Range. In between the two ranges flows the Matanuska River, paralleled by the Glenn Highway.  There's a tiny town along this stretch of highway - Glacier View, Alaska.

Glacier View lies at the foot of the huge Matanuska Glacier, at an elevation of about 2,400 feet. Its economy is based around the tourism industry - local businesses include a pizza parlor, zipline facility, and several lodges. The population was 234 as of the 2010 Census, though that number undoubtedly includes some people who live miles away from town, but are nonetheless classified as part of Glacier View for census purposes. Glacier View is 26 miles NNE of Mt. Marcus Baker, the best candidate for Mt. Crumpit. The town isn't a tightly-clustered idyllic village like Who-ville is - but hey, we're applying critical analysis to a Dr. Seuss book. You can't have it all.

Glacier View is furthermore the only eligible town anywhere in the US or Canada that I've been able to find, despite hours upon hours of pouring over maps. If anyone has an alternate candidate that fits the evidence, please let me know!

There are two candidates for Mt. Crumpit in the Chugach:

1. Mt. Marcus Baker. Marcus Baker is the highpoint of the Chugach, at a staggering 13,176' above sea level, and 10,700' above Glacier View. By Alaska mountaineering standards, Marcus Baker is looks like a benign climb via the NNW approach - from Who-ville - and features a sheer drop-off on its south side. 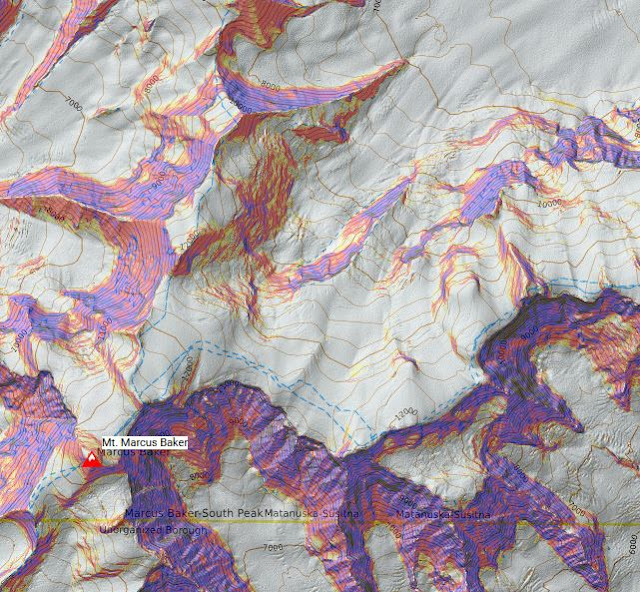 2. Mt. Thor. Thor has a cooler name than Marcus Baker, but that's about all it has going for it. Thor tops out at 12,251 feet above sea level, or about 10,100' above Glacier View. But in contrast to Marcus Baker, Thor's north (Who-ville) side is guarded by some seriously nasty-looking cliffs. Even with the strength of ten Grinches plus two, Thor would have been a grueling mountaineering objective - too much for the Grinch and Max, weighed down with many tons of Christmas trinkets. Mt. Thor is also another two miles farther from Glacier View than Mt. Marcus Baker is. For these reasons, I believe we can safely discard Mt. Thor in favor of Mt. Marcus Baker. 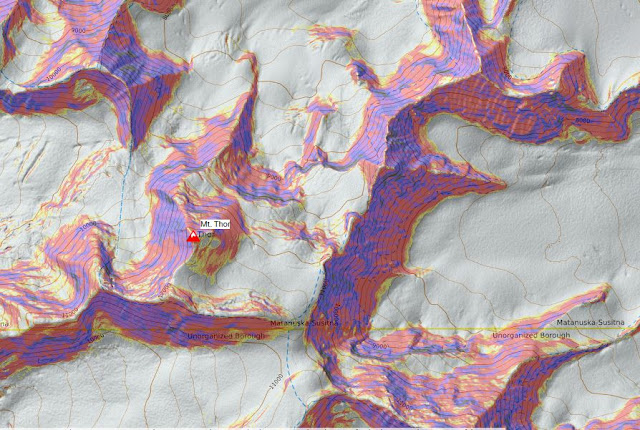 As a bonus, Marcus Baker has a more gradual north slope and a sheer drop-off on its south face, matching the description in the book and movie. 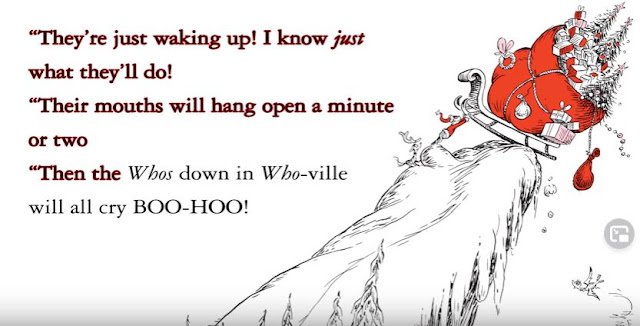 I was surprised at just how few Who-ville candidates there were. Peaks reaching ten thousand feet above sea level aren't exactly uncommon - but peaks that reach more than ten thousand feet above their surrounding terrain sure are. And as we get farther north, those immensely-tall peaks become less common, as glaciation erodes them quickly. And even if they do exist, there's probably not a town nearby.I guess that Glacier View is just special. If I were part of Glacier View's tourism council, I'd certainly promote my town as the Real Who-ville!

Thanks for joining me on this silly, fun excursion. It's been a difficult year for many people, and in such a year, it's particularly important to stop and celebrate our traditions, our families, and most importantly, the birth of Christ our savior. 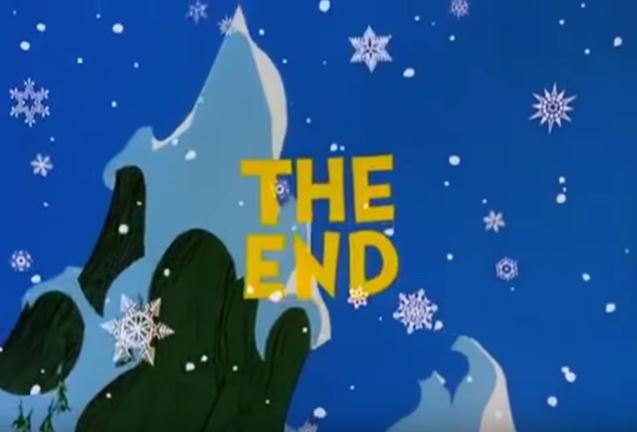