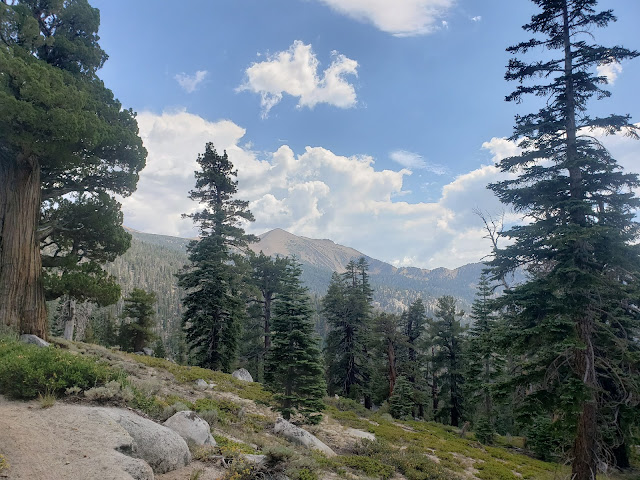 The Tahoe Rim Trail was something of a milestone for me. Although it's only 170 miles in length, it represents the first long-distance hike I've done since the foot odyssey began. I couldn't be more grateful.

Through the end of July, my longest backpacking trip this summer was a measly eighteen miles over two days. Typically, my foot would feel alright on Day 1 and marginal on Day 2. Day 3 would be spent on the couch with an ice pack. My big vacation plans for the summer thus looked a little dicey. Originally, I had plans to head to Europe for the wedding of some close friends, but had to scuttle those plans due to foot uncertainty - after all, it'd been a mere three months since my second surgery. Instead, I settled for something a little closer to home, where I spoke the language and had a robust support network. Enter the Tahoe Rim Trail (TRT).

Lake Tahoe is surrounded entirely by mountains - the Carson Range on the east (Nevada) side and the main Sierra crest on the west (California) side. The Tahoe Rim Trail runs on/near the crest of these ranges in a 170-mile loop. The TRT shares a concurrency with the Pacific Crest Trail (PCT) for about 50 miles, while the rest is dedicated TRT trail tread. The majority of the TRT (excluding the Wilderness areas, State Parks, and the PCT overlap) is open to mountain bikes. I saw nearly as many mountain bikes on the trail as hikers.

A major factor in my decision to attempt the TRT was my bailout options if my foot didn't cooperate. There are plenty of access points; by my count, the TRT crosses seven major paved highways in 170 miles. Even at my rather ponderous pace, I never carried more than 4-5 days of food.

Along the same lines, transportation was not a problem on this hike either. There are municipal bus systems that serve the north and south shores of the lake, respectively. And crucially, my buddy Blue Moon lives in the area and was more than happy to shuttle me if I needed to change plans. I know it's cliche, but this hike absolutely would not have been possible without him. He helped shuttle me twice (see below), and we also got a chance to backpack together for the first couple days - the first time we'd done so since the AT, nearly a decade ago.

Owing to foot-related uncertainty, I planned very conservatively for this hike. First, I only planned to do about 10 miles per day. That was roughly in line with the pace I'd kept on previous trips this summer. On one hand, the Tahoe Rim Trail is easier than the rocky, poorly-maintained trails I hike in the Uintas. On the other hand, I'd be going out for several days, not just a quick overnighter, and I expected the foot to wear down a little. I hoped the two factors would balance each other out.

Second, I only planned to hike half the loop. I parked my car in Tahoe City and Blue Moon shuttled me to the other side. I planned to do only the red portion of the loop (figure below). It would consist of a warm-up section of a few days (I wanted to determine how my foot would handle the all-important days 3 & 4) followed by some more difficult terrain on the SE side, in the beautiful Desolation Wilderness.

But when I got back to my car in Tahoe City, I was feeling good and ahead of schedule. So I phoned Blue Moon, who was happy to shuttle me back to my initial starting point. This time, I hiked the blue route, once again ending at my car in Tahoe City. In essence, I managed to turn the easy logistics of a loop trail into something immensely more complicated - some sort of flip-flop hike that required two separate car shuttles. And yet, I can't say it was a bad decision. It was simply a well-founded conservative game-plan given the uncertainty surrounding my foot. 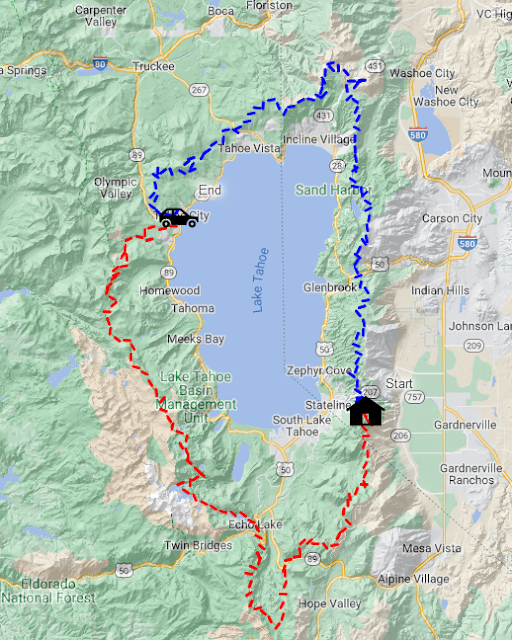 I was surprised by how well the foot held up. Each morning was a battle to stand up and walk around, but after a few minutes, it loosened up. It definitely hurt at the end of each day (particularly on my third-to-last day, where I did 19 miles with significant vertical gain/loss), but it was manageable. In some ways, it was similar to other (left) ankle. On one hand, it hasn't stopped hurting since mile 200 of the Appalachian Trail, nearly a decade ago. On the other hand, I've done many of thousands of miles on one bum ankle; what's to stop me from doing it on two?

Several injured hiker friends weighed heavy on my mind in the course of this hike. They've had recent surgeries or broken bones, and I know they'd love to be out here. And I have a couple of outdoorsy family members - loved ones from whom I draw immense inspiration - that are similarly sidelined with recent major surgery. They were on my mind constantly. In a way, I felt that my hike was theirs too - it represents a hope that they too can get back to running and adventuring in due course.

The trail tread on the TRT was absolutely incredible - by far the best I've seen on any long-distance hike. In 170 miles, I didn't step over a single fallen tree. On the penultimate day of my hike, I ran into a trail crew whose stated mission was to 'remove the rocks from the trail'. Indeed, the environment was often rocky, whereas the trail tread itself was typically a pleasant dirt path - the fruits of countless hours of trail work. My foot certainly appreciated those volunteers!

And it really was beautiful! There were several sections - the Marlette Lake area, the Desolation Wilderness, the little-remarked Granite Chief Wilderness - that stack up well with the scenery on any of the other long trails. 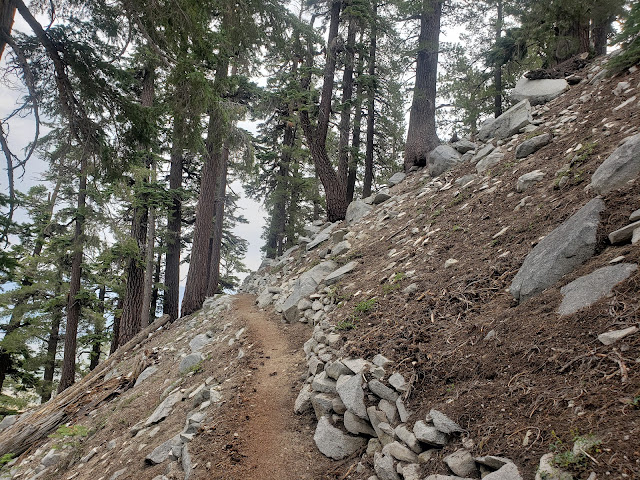 The Lake Tahoe region is near the huge population centers of California. And unsurprisingly, the TRT can hardly be described as 'deep wilderness'. Indeed, even the so-called Desolation Wilderness, stunning as it is, is neither 'desolate' nor truly 'wilderness' - more like wilder-nish. I saw multiple groups of TRT thru-hikers every day on trail, as well as mountain bikers, day-hikers, trail runners, and dog walkers.

The diversity of TRT users was encouraging to see. There were the old-timers out there toting external frame packs held together with duct tape, PCT bros doing 30-mile days, and more than a few rookie thru-hikers, most of whom seemed to be thriving. The TRT in particular seems like an ideal trail for a first-timer. It's long enough to get a sense of a real journey, but short enough to be completed in a reasonable length of time. It's perfectly maintained, well-marked, and has some truly beautiful sections to savor. If the TRT is any glimpse into the future of the other long-distance hiking trails, then the future is bright indeed. 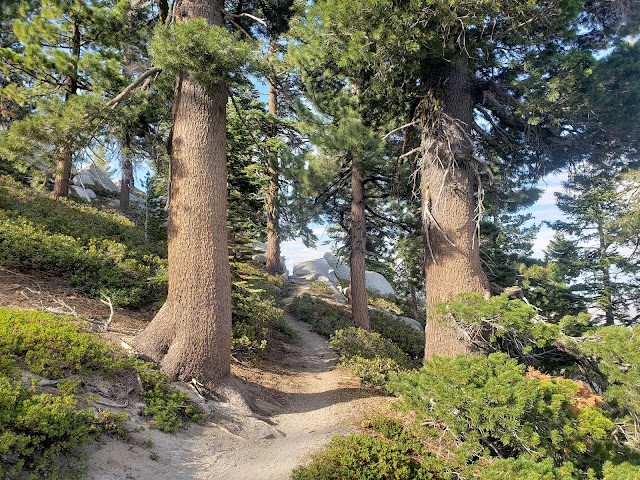 Overall, I didn't see a ton of wildlife on this hike. That's not entirely unsurprising, as the Tahoe region is at best Wilderness Lite, as mentioned previously. I saw no elk, no moose, and only a couple deer. Chipmunks were absolutely everywhere, and will be indelibly linked in my mind from now on to that unique eastern Sierra environment of sand and granite boulders.

I did see black bears on this hike. On the first occasion, I saw a mother and cubs in the vicinity of some cabins near Echo Lake at the southern end of the loop. I saw them ahead on the trail before they saw me. I backed up a couple hundred yards and made a ton of noise to hopefully encourage them to move along. That didn't work at all; the sow gave me an unconcerned glance and stood her ground. I ended up bushwhacking around them as they lazed around, completely unmoved by my presence.

On another occasion, I was walking down the sidewalk in downtown Tahoe City when a bear suddenly dashed across the road and scurried into a tiny patch of woods. Several drivers had to slam on their brakes. The inconsiderate bruin didn't even use the crosswalk!

I have virtually no experience with the famous habituated black bears of the eastern Sierra. And in several communities, every single trashcan you'll find is bear-proof, so they're clearly a problem. Bear canisters were required in the Desolation Wilderness, where several nuisance bears have been ransacking lakeside campsites recently (naturally, I camped nowhere near those locations). But I opted to carry a bear can even in areas where it wasn't required. The Tahoe Rim Trail Association recommends them for the entire hike, and because I just didn't know what the habituation level was like elsewhere, I carried one the whole way just to be on the safe side. In retrospect, it probably wasn't necessary (I saw unsecured trashcans at several different trailheads, a surefire sign that they're not a huge problem), but it's always tough to know, as an outsider, where you can get away with it and where you can't.

An unusually strong surge of monsoonal moisture pushed into eastern Nevada for almost the entire duration of my hike. Thankfully though, the storms formed just east of the Tahoe area most afternoons. I'd often see ominous clouds building to the east, but my location would see nothing more than a few sprinkles and some well-appreciated clouds for shade.

Only one time did it really rain, but that morning was a doozy. I got up early to pack up before it started raining... and I almost made it. My stuff was all spread out on the ground when it suddenly started pouring, and even though I packed in a frantic rush, some of my gear got a little wet. The rain continued uninterrupted for the next 7 or 8 hours. The ancient Frog Toggs rain jacket and skirt that I'd brought were badly ripped and mostly ineffective, so the fact that I'd brought my umbrella was clutch, to say the least. Rain is never pleasant, but I was a lot less miserable than the rest of the folks out there who didn't have umbrellas. 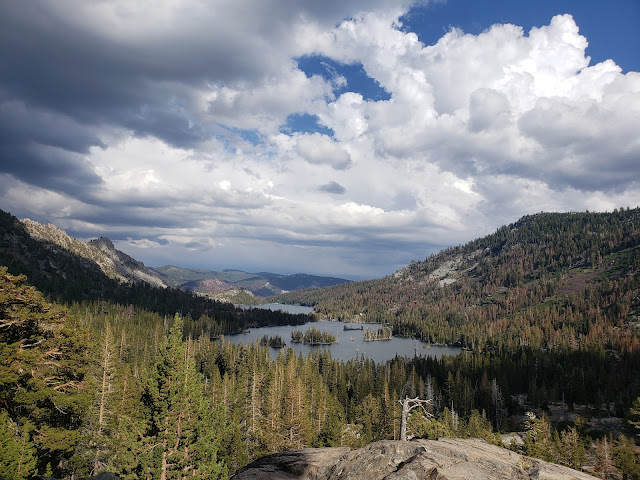 Speaking of rain, the West has been locked in a big-time drought for the past decade or so, and the Tahoe area is no exception. Because much of the trail runs along ridges, there isn't as much water as you'd think on the TRT, particularly around the north and east sides of the loop. I'd heard much weeping and gnashing of teeth about this before the hike, but I found it really not to be a problem. There were no unavoidable water carries of more than ~15 miles, and though I set up a pair of water caches when Blue Moon shuttled me to start the second half of my hike, I barely drank a liter from one, and didn't touch the other. Perhaps it's just the jaded desert dog in me speaking, but I really didn't see the big deal.

The TRT was a great hike. It was most certainly Wilderness Lite, but that's exactly what I needed at this stage of my recovery. It's hard to describe the joy of being on trail in a major way for the first time in a year and a half. I'm grateful to the Tahoe Rime Trail Association for making an accessible trail, and to Blue Moon for helping make the hike possible. Above all, I thank God that I'm at the point in my recovery where this hike was even feasible. I'm hopeful that this trail will propel me back towards bigger and better things. 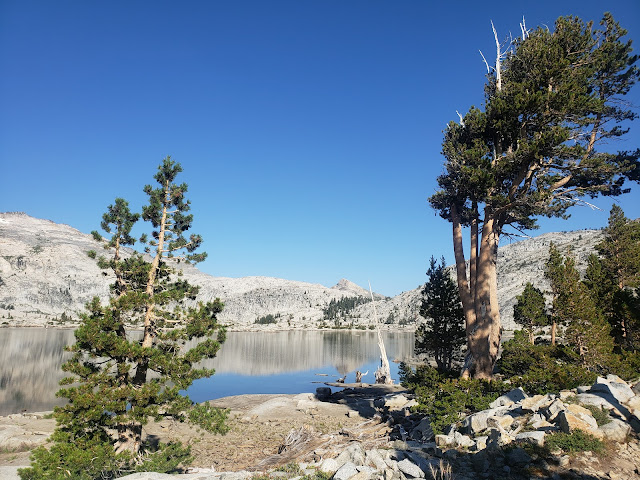 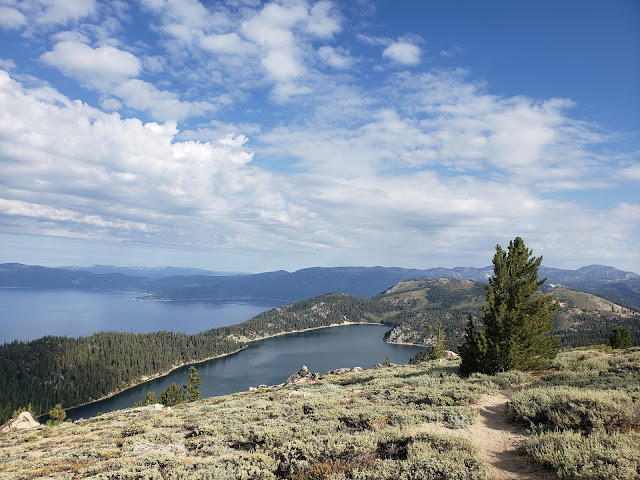 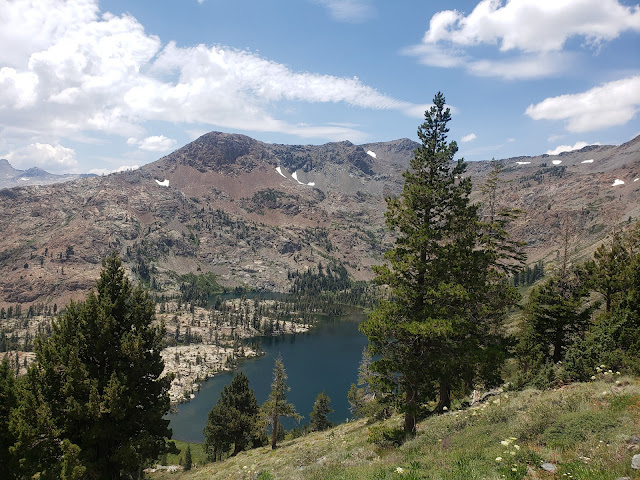