In which I drink the hemlock

Ok so I'm being a little dramatic. But climbing a peak named Mt Olympus today did make me feel like an ancient Greek philosopher, and liquid (in this case, the lack thereof) did just about kill me at points. The real moral you should all take away from this is that I am Socrates, clearly. 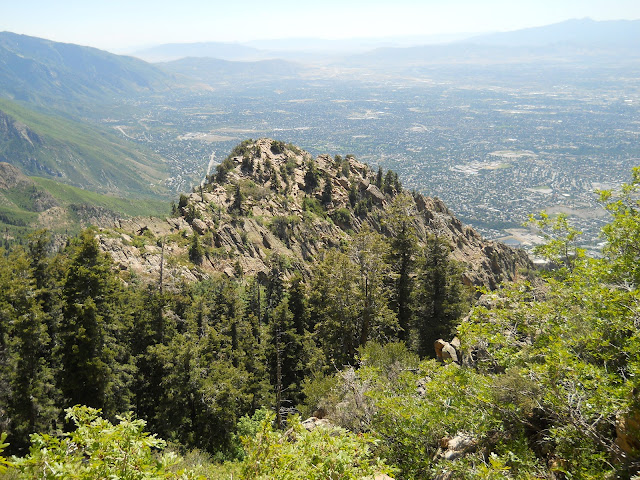 Ok fine, I'm only Socrates insofar as I'm quite short, impudent and not especially good-looking. But getting back to the point, I climbed Mt Olympus today. It's noteworthy because it's right on the Wasatch Front, which means it's the most visible mountain to most of the Salt Lake Valley and it dominates the SLC skyline. It's only 9000 feet and change, but it rises steeply from the valley more than 4000 feet below. The trail is apparently only a tad over 3 miles long. But 3 miles is a long way when you're gaining more than 1300 feet each mile. Further complicating matters was the fact that I was under-equipped in terms of water; 2 liters is NOT ENOUGH!

Did you get that? If you're hiking in Utah in June, it's super-arid. And when you're sweating buckets, 2 liters is NOT ENOUGH! If you're still unclear on this point, I suggest you re-read this paragraph. Lather, rinse, repeat as necessary.

Turns out that I did have enough water, not because I brought enough but because I budgeted it well; I drank almost 3/4 of it on the way up, when I was working hard. That's a good rule of thumb to remember for next time. In related news, there are few things better than Minute Made lemonade. I'd buy it in spades. I started drinking it as soon as I paid. I'd totally make it my trade.

So the elevation profile looks like a set of stairs roughly. It starts out with a section of doom, then levels off for a bit. Just when it has you feeling confident, it throws a few switchbacks with poor footing at you: more doom. It levels off just enough where you think you've conquered the worst of it. If I need to tell you that more doom is in order for the next section, you're not a very perceptive reader. It's an unrelenting grade for over a mile (with the poor footing, of course), and it is HOT. It's hard to get Kevin uncomfortably warm, but today did the trick. 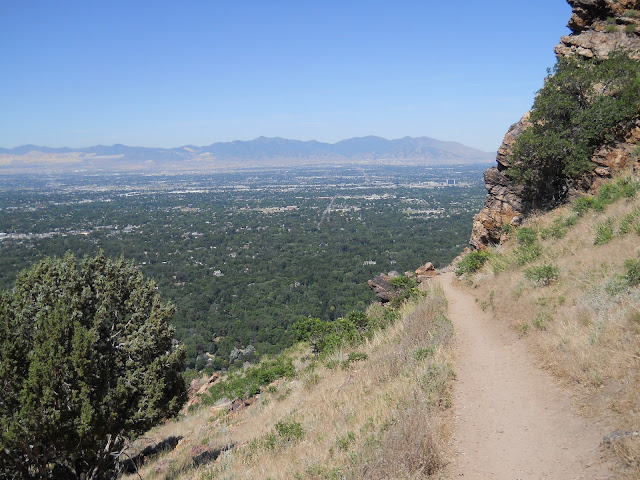 Above: not-doom. Below: Yep, that's the trail. Good luck. 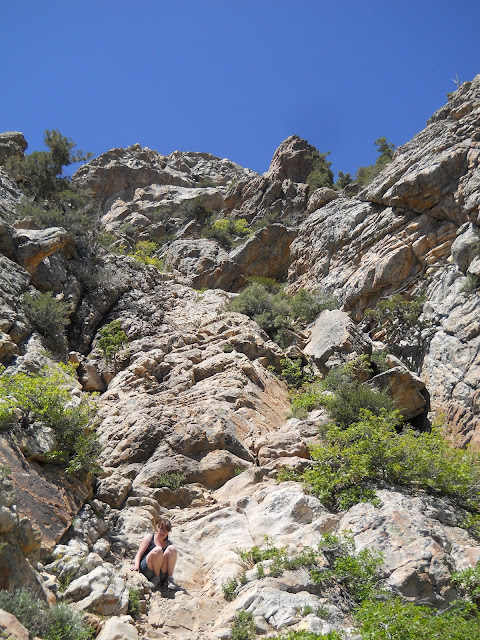 But then I hit the saddle point, a gap between two peaks. It's basically completely level there and some people use it as a camping spot. I'd say that at least half of hikers don't actually summit; they go to the saddle point and stop there. That's because the doom I had experienced so far was child's play compared to the journey from the saddle to the top. I'll save you the histrionics: it was hand-over-hand climbing and scrambling. It wasn't super-long (maybe a few tenths of a mile), but it took a while. If you're ever on the mountain and you make it to the saddle, just look for the most forbidding rock face imaginable, and you'll have a rough idea of where the "trail" goes up. It was probably a 70 degree angle upward for most of the climb. And it was FUN. I ditched my pack once the scrambling started (I didn't have enough water anyway, and this would remove the temptation to drink it all at once). It was a good thing I did.

Utahans must be terrible at telling time or something. People kept telling me "15 more minutes" before I would reach the top for a solid hour before there were actually 15 more minutes. Granted, you go faster downhill than up, but I don't care how fast you hike, you can't do in 15 minutes downhill what I do uphill in an hour 15. Well, I suppose you can, but your descent might not be exactly controlled or graceful. But once I was at the top, I found the views to be totally worth the strenuous effort; Olympus looks out over the whole Salt Valley. I had good views of the city, the Great Salt Lake, and the Kennecott copper mine, which, locals can tell you, can be seen from space. Nothing like being proud of a polluting, ugly strip mine. Unfortunately, it was kind of hazy so my pictures turned out rather nondescript, but I suppose that if they were too great you'd never have reason to hike it yourself. Confront the doom! 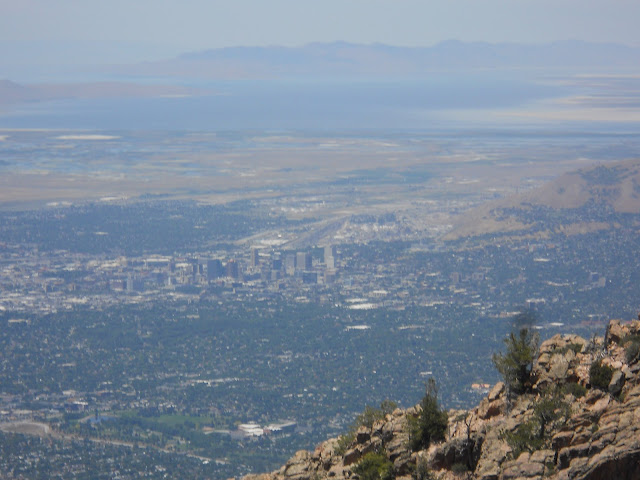 Above: The view from the top. We see Salt Lake City and the Great Salt Lake is in the background. In the middle of the lake is Antelope Island, upper left.

This brings me to the Utterly Impractical Hiking Item Of The Week: Before I say it, I should mention that last week's winner was a watermelon that some guys lugged up the trail to Lake Blanche. Delicious? Absolutely. Braindead? Without a doubt. The problem is it weighs 10 pounds, most of the weight is rind, and it provides little hiking nutritional value. Anyways, this week's item is a folding chair! Except it gets worse: it's not that these bozos scrambled up the trail with a folding chair on their backs.Instead, they took the contraption on their backs while rock climbing! They rock-climbed up a sheer rock face with a folding chair on their backs and then hiked down the trail. On a scale of one to ten, that's one of the stupidest items ever to carry on a hike. To be fair, I did the first section (very short) with my landlady (who's absolutely wonderful, as an aside), one of her friends, and the friend's granddaughter. So we had things along like coloring books and crayons. They only went a little ways before deciding the first doom section was too much for them and turning around. 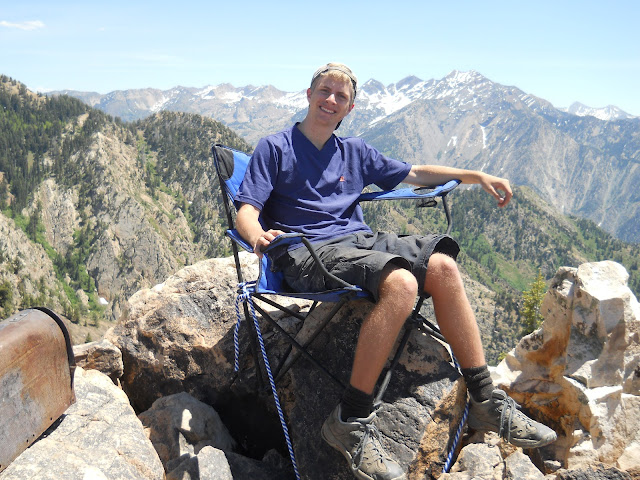 Someone had left a blue bag chair at the top with a note: "You're welcome to sit here, but BRING YOUR OWN NEXT TIME". Yeah... ok. As long as I don't bring a metal folding chair... 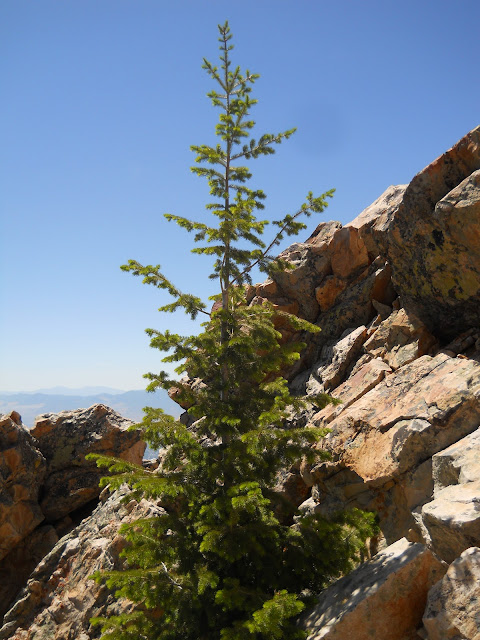 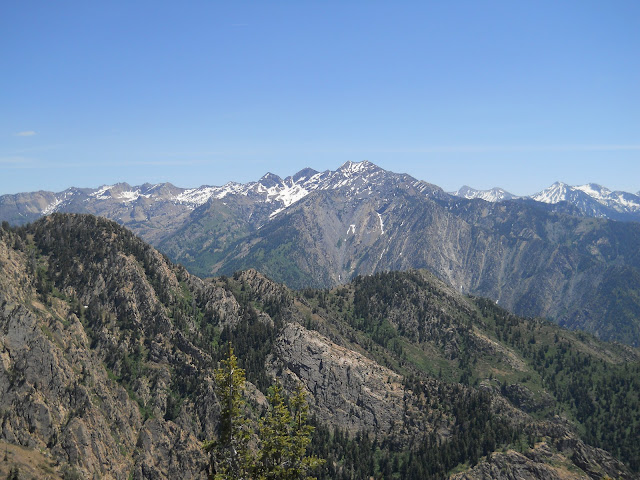 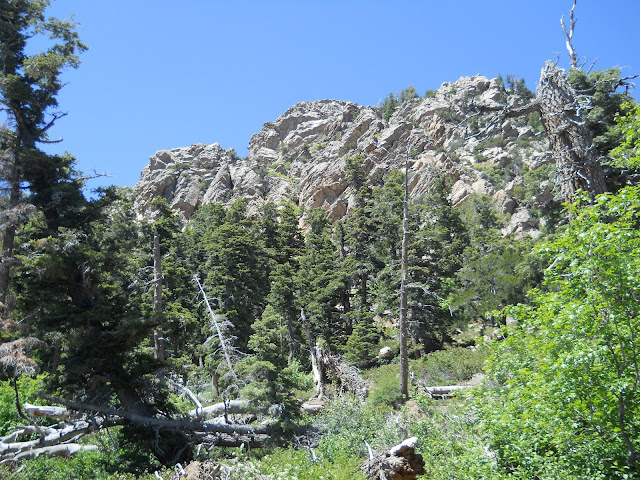 Oh and by the way, people look at you strange when you carry a loaf of French bread sticking out of your backpack.
Posted by LarryBoy at 11:05 PM