One if by land, two if by air, three if by space

Sorry about the butchered Longfellow reference. The upshot of this weekend was transportation. I didn't do any hiking, (thankfully, because it hit triple digits on Saturday) but did manage to still see a lot. 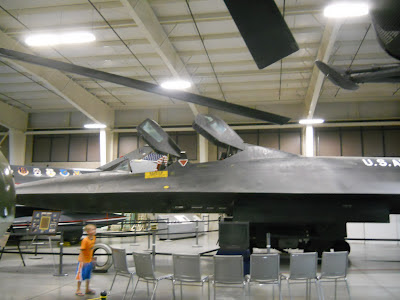 The Hill Aerospace Museum features a lot of planes that were based in the neighboring USAF base, among other places. Highlights included quite a few first-generation experimental jet fighters. They've always looked like sharks to me, with the gaping hole just in front of the cockpit. They also had F-15s, F-16s, F/A-18s, and F-22s. But the coolest thing, I thought, was an SR-71 Blackbird. A crash course for those of you who didn't notice the glaring error two sentences ago: the Blackbird was a spy-plane developed by the US during the 60s as a high-altitude, high-speed plane that could laugh at anti-aircraft missile batteries as it raced past at Mach 3. It still holds the record for fastest airplane ever. It flew from New York to London in under 2 hours.

Sadly, I had less than 45 minutes to see stuff there (thank goodness for free admission!) before I had to take off for Promontory Summit. One of the really annoying historical inaccuracies is the myth that the first transcontinental rail line was completed at Promontory Point. Actually, Promontory Point is the tip of a peninsula that sticks out into the Great Salt Lake-- hardly the place to build a railroad. Promontory summit, located 20 miles to the north, is where the line was completed. The Golden Spike National Historic Site (good grief, what a long name) marks the place. Unfortunately, the railroad no longer runs across Promontory, and hasn't for about 100 years. The line featured torturous grades and sharp curves. Instead, the Southern Pacific Railroad built a causeway all the way across the Great Salt Lake. And that line ran through the aforementioned Promontory Point.
There is still a segment of track left up at Promontory Summit, where they run re-enactments of the joining of the line on May 10, 1969. The replica locomotives were the coolest part; they're fully functioning just like the originals (which were scrapped out in the early 1900s), and are within a quarter inch of all specifications.
The Jupiter was the Central Pacific's locomotive, the 119 was the Union Pacific's. 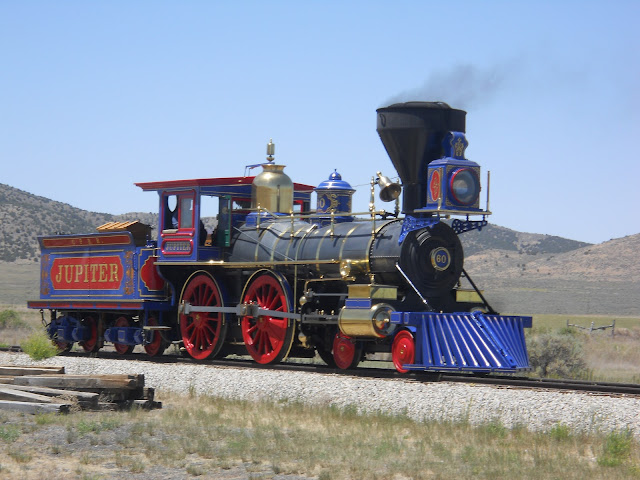 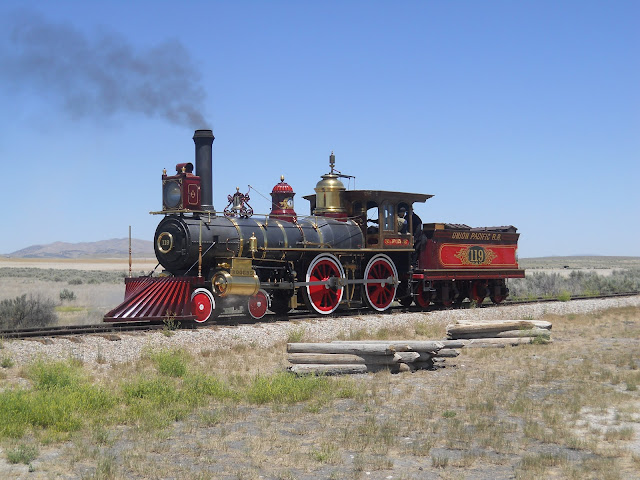 The rest of it was alright, but not particularly in-depth; I didn't really learn anything of substance. Nonetheless, it was cool and significant and I'm glad I saw it. And while I was in the area...

Less than two miles down the road from Promontory was ATK (formerly Thiokol), which is a principal producer of rockets, especially rocket engines. They had a nice little display of their products out front, which included Minutemen missiles and Polaris missiles,both of which were ballistic nuclear missiles. The Polaris missiles were actually made to be launched from submarines. Your homework is to figure out which missile is which (and yes, you can figure it out just from looking at the picture without any outside knowledge). They're the two prominent ones standing upright. 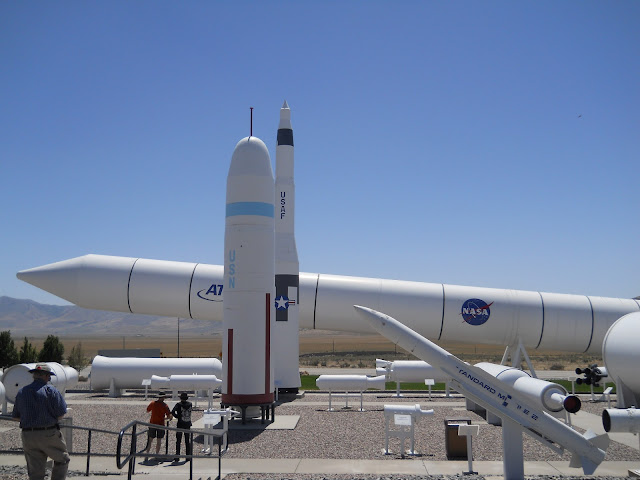 In the back, you can see the Space Shuttle booster. They're re-usable; after every launch the boosters are shipped back to this facility to be refurbished for the next launch.

I headed back to Ogden, UT to visit the Utah State Railroad Museum, located in the old Ogden Union Station. After the completion of the transcontinental line in Promontory, the Union Pacific and the Central (later Southern) Pacific moved their interchange point to the nearest hospitable city, Ogden. The museum was intensely interesting; along with the usual pedantic superficial gloss, there were some pretty good exhibits on the Big Boys, the largest steam locomotives ever made. There was also an interesting model railroad depiction of the line from Sacramento to Ogden. But the coolest part was undoubtedly the collection of equipment. I saw the longest, most powerful diesel locomotive ever made, the DD40AX 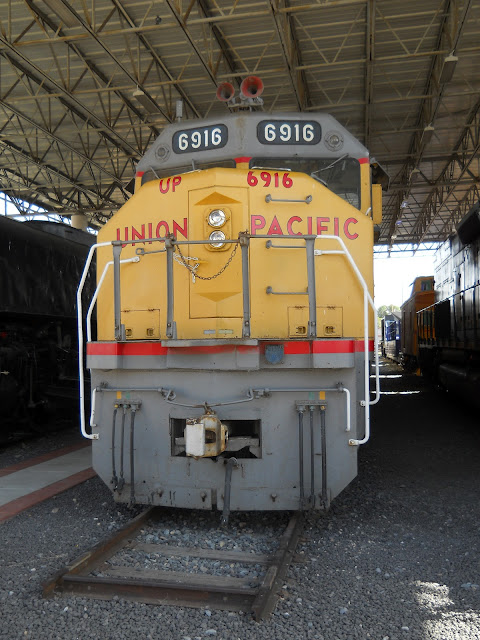 World's most powerful diesel not enough for you? How about the world's most powerful locomotive of any type, a gas-electric turbine. This locomotive could haul a 6.5 mile train, fully loaded, by itself. Locomotives of this type were known as "big blows" and banned from operating in southern California because they sounded like jet engines, and were just as loud. 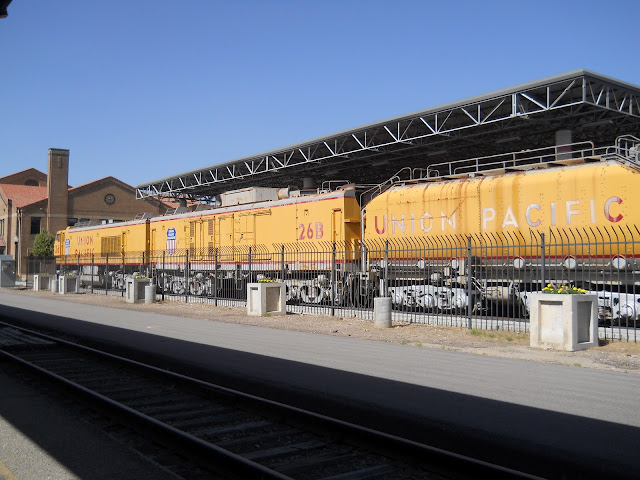 And finally, a pretty steamer. This is the sister of a different locomotive that has been run continuously since the 1940s. It could haul 8-10 passenger cars at 120 miles per hour. 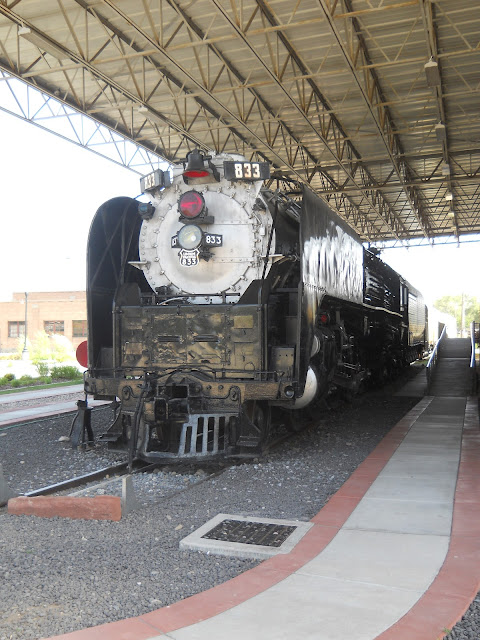