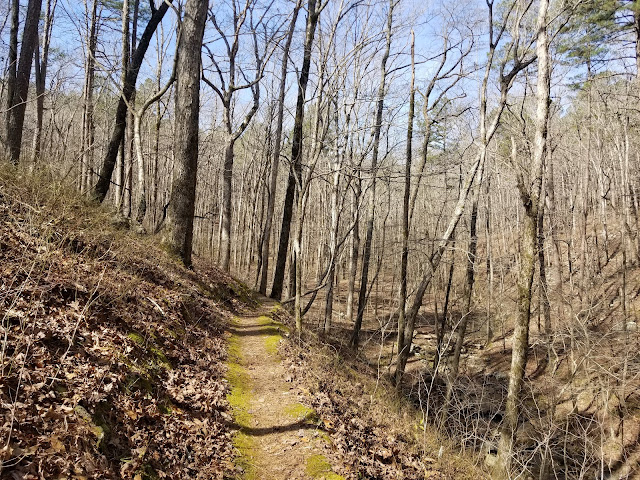 The Appalachian Trail has a unique lingo. Some of this language seeks to describe the ways that people travel on the trail. The main trail from Georgia to Maine is marked by white paint splotches roughly the size and shape of a dollar bill. Naturally, when you're walking on the designated AT, you're said to be "whiteblazing". Side trails are marked with blue blazes, and those who deviate from the main trail in their journey north are said to be "blueblazing". The term "blueblazing" often carries a pejoritive connotation - that somehow it's more holy and righteous to hike the designated AT than to take alternate routes.

In Arkansas two long-distance hiking trails run parallel to each other - the 160-mile Ozark Highlands Trail (OHT) and the 220-mile Ouachita Trail (OT). The OHT is blazed white, just like the AT, while the OT is blazed blue, just like the AT's side trails. I hiked the OHT in 2018 but didn't have the chance to hike the OT until 2019. In so doing, I couldn't help but comparing the whiteblazed trail to the blueblazed trail. And at least in Arkansas, the blueblazed trail comes out on top.


In many ways, the trails are similar. They're of roughly equal length, run through similar environments, are both well-blazed, seldom-used, and are surrounded almost exclusively by a corridor of public land. The hiking season is roughly the same, elevations are virtually identical, and the forests look a lot alike.

There's just one difference: The Ouachita Trail is infinitely more enjoyable than the Ozark Highlands Trail, at least in my opinion.

It's tough to articulate exactly why I think that. I think part of it has to do with my fascination with maps. The OT takes a really elegant line, staying high on ridgetops whenever possible. It has very few PUDs (pointless ups-and-downs), hits a surprising number of summits with pretty views, and generally just "makes sense". The OHT, by contrast, seemed a lot more arbitrary in nature, constantly climbing or descending into or out of a ravine without any clear purpose. The nature of the trails largely depends on the geography of their respective ranges - the Ouachita Mountains is a range with clearly defined east-west ridgelines, while the Ozark Highlands are a jumbled pile of misshapen hills and gullies running every which way. Sure, the OHT had some decent waterfalls and passed through some wonderfully remote designated Wilderness areas, but the OT had plenty of that too, while also offering my inner map geek a sense of coherence and effective forward progress.

There are two other advantages the OT has: more foot traffic, and shelters along the way. While both trails see little traffic, the OT is better-trod in most places. Normally this wouldn't matter too much, but Arkansas trails are famously rocky underfoot. When there's no traffic on a trail, a thick layer of dead leaves quickly builds up on the trail such that it's impossible to see what you're stepping on until you step on it and twist an ankle. More foot traffic smashes down those leaves. The OT isn't any less rocky than the OHT, but at least you can see what you're stepping on!

On the topic of shelters, the Friends of the Ouachita Trail (lovingly abbreviated "FoOT") recently completed a shelter-building project along the length of the trail. Except for a 30-mile stretch of private land near the west end, there are gorgeous Appalachian Trail-style shelters roughly every ten miles. This came in very, very handy given the weather I faced on the OT. 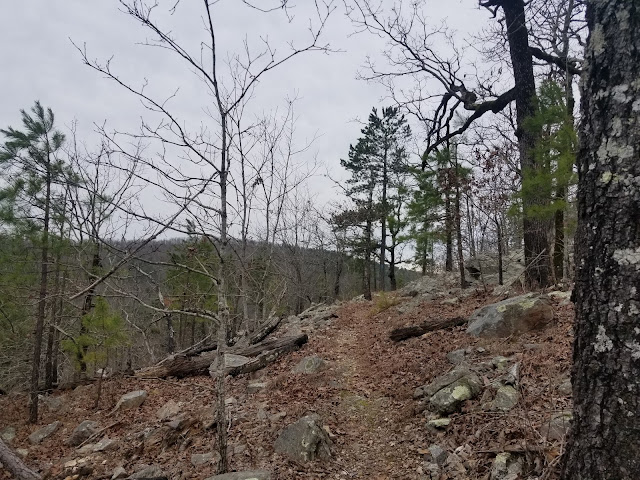 After wrapping up my Florida Trail hike, I caught a flight to Little Rock, Arkansas to start the OT. Given my previous Arkansas hiking experiences on the OHT, I didn't have super high expectations for the OT. I liked the OHT because I'm an excitable little puppydog when it comes to long distance hiking and tend to view any time spent outside as terrific and wonderful. But to be honest, I must admit that the OHT is probably the long-distance hike I enjoyed the least.

But from the get-go, it became clear that the OT was a whole different beast. In true jaded long-distance hiker fashion, I skipped the first mile or two (and the official western terminus) and instead started by climbing Pinnacle Mountain. Pinnacle is a popular little mountain as it's within driving or public transit distance of Little Rock. I got dropped off at the trailhead right before sunset and climbed it in the fading twilight. And by "climbed", I do mean a solid Class III scramble. There are definitely easier routes to the top, but I preferred to freelance my own steep and direct route. The whole mountain is just a giant rock pile so it's scalable from just about any direction. I reached the summit just as the sun was setting. A couple of headlamp miles later, I set up my tent and fell asleep. I had woken up that morning on the Florida Trail and went to bed on the Ouachita Trail. A quick turnaround indeed! 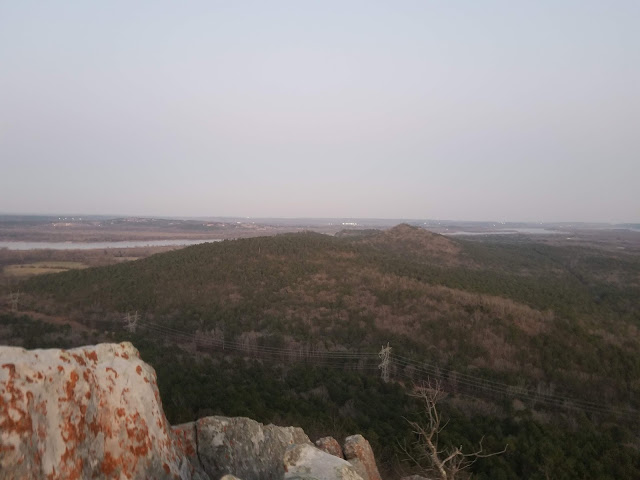 What followed were the Three Glorious Days. I'd checked the weather before I got on trail, and true to Arkansas-in-March form, the forecast was a bit apocalyptic. But before the bad weather was scheduled to move in, I had a window. Three days. Three Glorious Days. They were bright and sunny, with minimal wind and perfect daytime temperatures. I took my time, enjoying long lunches in the sun and detouring to a couple of mountain summits overlooking sweeping valleys already starting to green up.

On Day 2, I got up early and had made a quick 5 or 6 miles when I saw a couple walking toward me. From a distance, I saw silver umbrellas strapped to their packs - a sure-fire sign of a long-distance hiker. As they got closer, I stopped in my tracks.

They were as surprised as I was. I'd met Naomi "The Punisher" last year at a hiker get-together. Most notably from my perspective, she's one of a tiny handful of fellow hikers who's hiked the Idaho Centennial Trail. I'd never met her husband, "Iron Mike", but of course knew of him. I re-introduced myself and we proceeded to geek out on all things trail for a solid half hour, standing right there in the middle of the trail. You know you inhabit a niche community when a hiker from Utah meets a hiking couple from Washington on a trail in Arkansas and they already knew each other!

The fourth day was a complete washout. I spent most of the day hiking in the pouring rain, though I did pop into a local cafe to pick up my resupply package and eat a gigantic burger. And I checked the forecast. Yikes.

One nice day. Then for the next week, rain chances were somewhere in the 80%-100% range every single day. And true to the forecast, I had one more nice day. I hiked hard that day and the next morning, trying to beat a line of severe thunderstorms into town. And I made it! I arrive at a road crossing mid-afternoon and spent an hour and a half hitchhiking to no avail. When it started to rain, I deployed my umbrella and kept my thumb out. As those raindrops turned to dime-sized hail, a kind fellow stopped and picked me up.  So for those of you who think an umbrella is an Utterly Impractical Hiking Item of the Week, think again!

I got a motel room for the night and made my descision. I was in Mena, AR, at about the two thirds mark. Mena was also the nearest bus stop to the western terminus. Hiking all the way to the western terminus would involve hiking three days in a virtual hurricane, only to try and get a long hitch back east to right where I was right now. I could do all that... or I could not. So I didn't. I quit. I had a terrific time on the Ouachita Trail and had no desire to ruin it with three miserable days.

I've done two thirds of the Ouachita Trail. I loved it. I love mountaintops and waterfalls and gorgeous shelters in the rain. I loved the little purple flowers that were just starting to bloom. I realistically won't be back to Arkansas anytime soon; there a lot of places to hike in the world, and I've done quite a bit of Arkansas already. But I sure did enjoy my time there. Oh, and go eat a burger at the Bluebell Cafe! 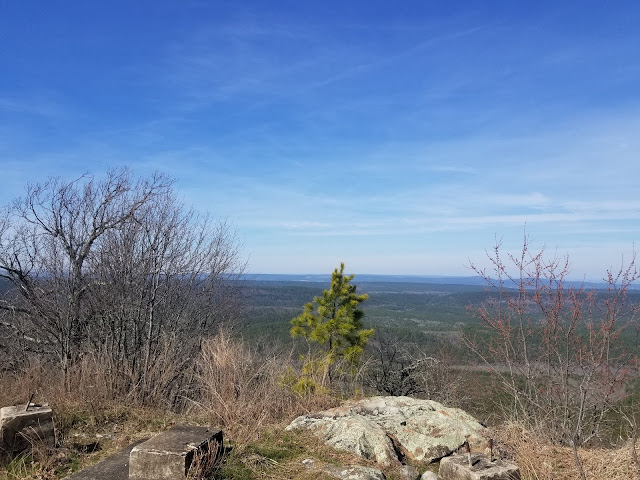