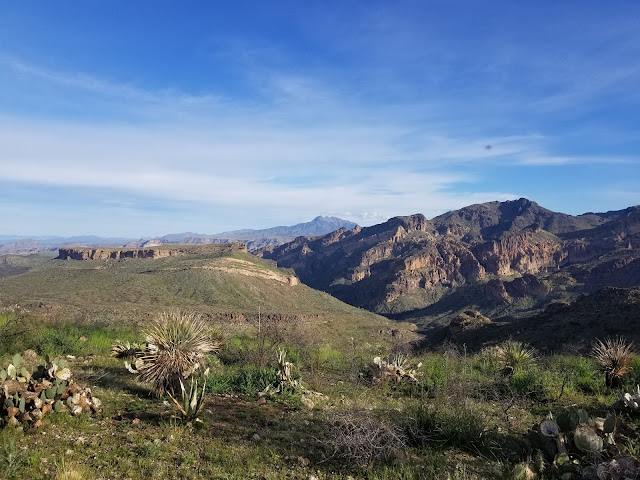 Following the conclusion of my Ouachita Trail adventure, I headed out to Arizona to begin the Grand Enchantment Trail (GET). Starting just outside Phoenix, the GET meanders nearly 800 miles through the highlands of eastern Arizona and western New Mexico to its terminus in Albuquerque. The GET is definitely a route rather than an official trail, much like the Hayduke Trail, Deseret Hiking Route, or Lowest to Highest.

The route begins by winding its way through the Superstition Mountains. After about 25 miles, it joins up with the Arizona Trail (AZT), following it south past the towns of Superior and Kearny before departing to the west, New Mexico-bound.

From the very beginning it was clear that this was not a typical Arizona backpacking trip. The Phoenix area had been soaked by several inches of rain over the past week, and as the sun set and the temperature dropped, dew collected heavily. I set up my shelter each night on trail. Water is ordinarily a scarce commodity in the deserts of the Southwest but was flowing in the bottom of each little gully and drainage. I certainly didn't expect to spend most of the time hiking with wet feet, but then again, it's been a strange, wet, cold spring. 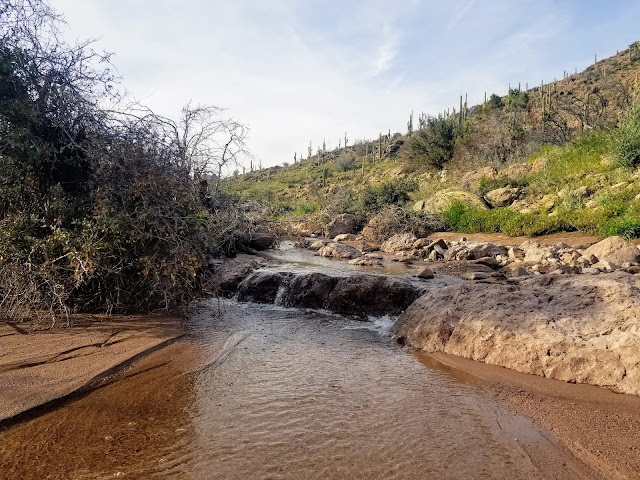 Near the trailhead, the trail underfoot was wide and smooth. As I got deeper into the wilderness, trails gradually deteriorated, becoming increasingly faint and brushy. I hiked through several areas that had burned in the 2019 Woodbury Fire. In such areas, the trail was next to non-existant. Catclaw tore at my legs, leaving me with classic "desert pinstripes" - lines of scrapes and scratches.

But my oh my, the Superstitions were lovely. I'd hiked through the Supes before as part of my AZT hike in 2019. I'd been a little disappointed in the Supes my first time around, as the trail stays largely in the eastern, higher part of the range, in pinyon forests. They were alright, but not quite as pretty as I was expecting. By contrast, the GET passes through the lower, western part of the range before joining up with the AZT. Despite being lower, I found the western Superstitions to be more dramatic and scenic than their eastern counterparts. I hiked over a few high passes, up tight box canyons, past fields of wild poppies, and within eyeshot of the iconic Weavers Needle and Four Peaks. All in all? A wonderful stretch of not-quite-trail. 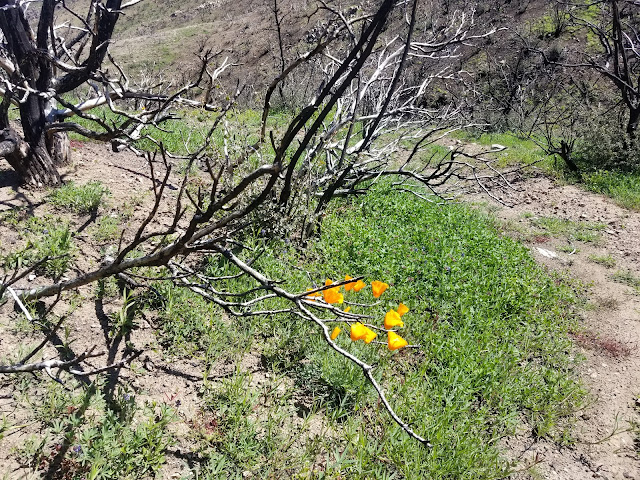 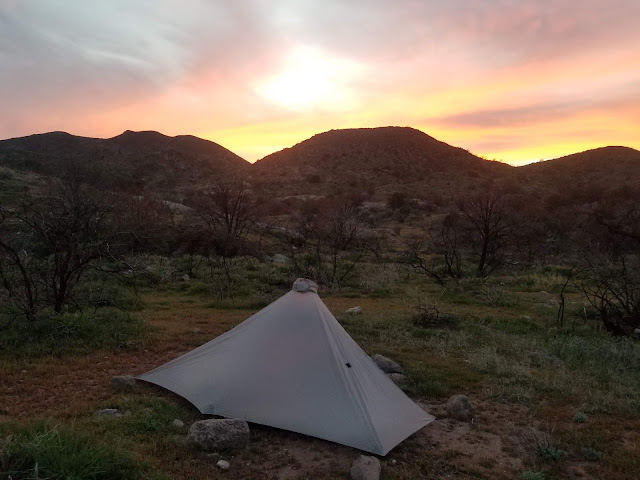 When I joined up with the AZT, trail tread immediately and dramatically improved. The AZT is probably the easiest (aside from the completely-flat Florida Trail) long-distance hike I've ever done. The trail is built to modern standards and is mountain bike-friendly. In the wake of the Woodbury Fire, volunteers have already cut back the burnt and fallen trees and kept the encroaching post-fire brush at bay. It was a true joy to walk on and a testament to the strong community support that many of our most beloved long trails enjoy. I saw quite a few AZT thru-hikers hiking toward me on their own long-distance journeys. They were headed north toward the Utah border while I was heading (temporarily) south, eventually toward Albuquerque.

As I met these AZT hikers, I was surprised and not a little dismayed by the flippant attitude that many showed toward the emerging coronavirus pandemic. Certainly, some of it was due to being disconnected from larger society, where the situation was rapidly evolving. Some of it was due to selection bias - the large majority of people who were taking things seriously weren't out here - because they were taking seriously the guidelines about non-essential travel that health departments were just starting to issue. Still, I was a bit distressed by some people's sneering attitude of invincibility, even as I pondered what to do about my own hike. 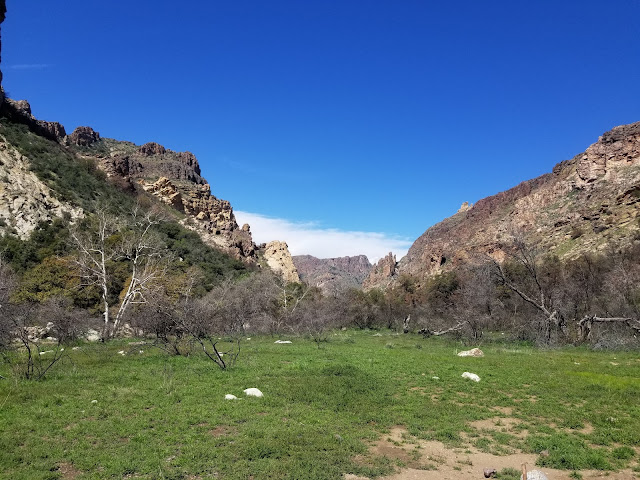 Eventually I got cell service and spent a few minutes catching up on what was going on with the world. Even if a hike on the little-used Grand Enchantment Trail is relatively low-risk (it's hard to catch the bug when the nearest person is twenty miles away), resupply in tiny towns at the end of a long and fraying supply chain is bound to be a challenge. What if that small town post office is closed because the one and only postal employee is sick, or if governors issue shelter-in-place orders? In a quickly evolving situation where society is bound to be impacted in unpredictable ways, could I have any confidence that I wouldn't get stuck hitchhiking on a deserted road dozens of miles away from my resupply point? Furthermore, when (not if) my plans got blown to bits and I had to improvise, that would put me in a lot of contact with a lot of people. And getting sick and becoming a burden to a town without any medical facilities is not an option.

I think there's a lot of fear-based decision-making happening right now and frankly, the parochial attitude of some folks is getting a little tiresome. But in evaluating the situation as dispassionately as I could, I concluded that the most prudent parth in an uncertain situation was to hole up in a place with good supply lines and medical facilities. So after three days and 40-something miles on the Grand Enchantment Trail, I quit. I hitched a ride into Superior, AZ with a passing motorist, who happened to know somebody who was headed into Phoenix tomorrow. After staying the night, I caught a ride to Phoenix and got on a plane. 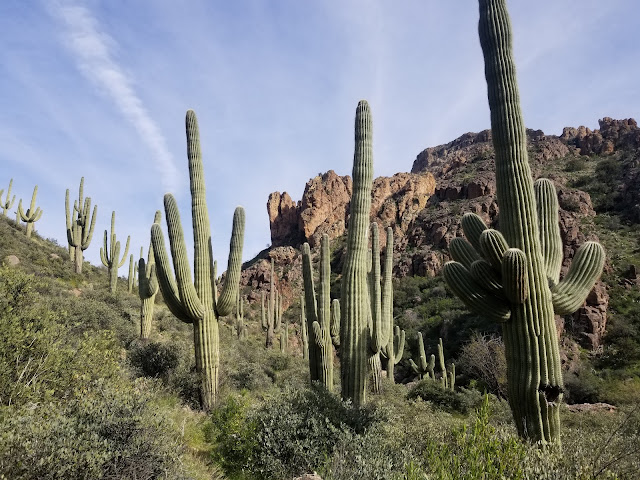 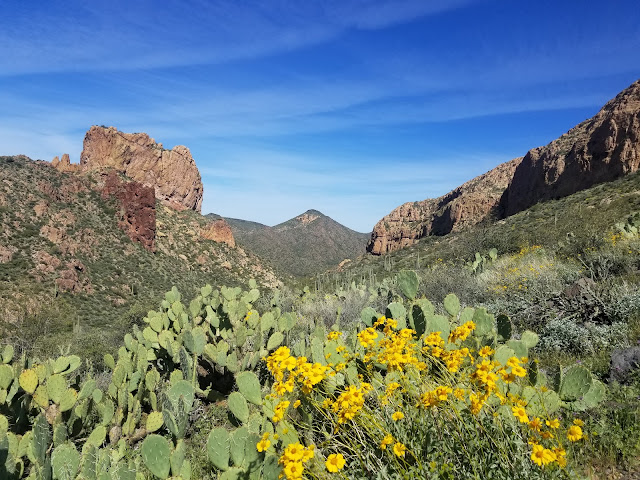 Here I sit in the Midwest in self-imposed exile after having traveled by air. Though I'm bummed not to continue the GET, it's hard to feel too sorry for myself. I've lost the opportunity to take what's essentially a vacation with a fancy title. Others have lost their jobs, their health, or even their lives. I'm going to do my part, stay home, and not make things worse. I'm going to respect both the letter and the spirit of the various public health orders and guidelines that are being put forward. As far as I'm concerned, "only the essentials" means "only the essentials". And I don't really need that much.

Let's not end on that note though. Let's instead end with a pair of mediocre photos of a lovely field of poppy blooms that I found in the Superstitions. And let's keep in mind one of my favorite Dutch hymns which reminds us that God is still in control and still cares for us:


We gather together to ask the Lord's blessing;
He chastens and hastens his will to make known.
The wicked oppressing now cease from distressing.
Sing praises to his name; he forgets not his own.

Yep. That seems about right. 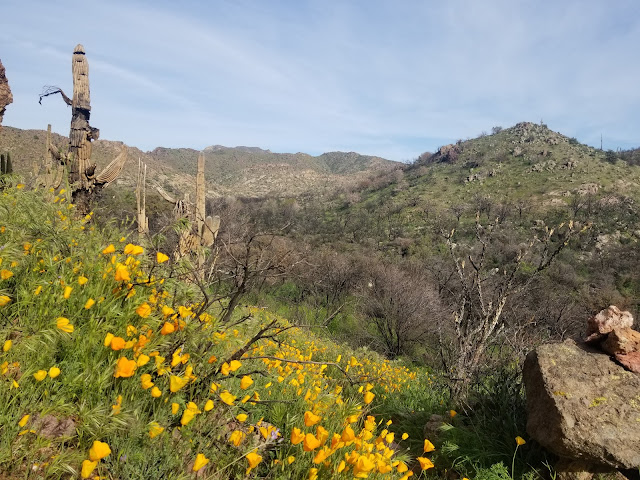 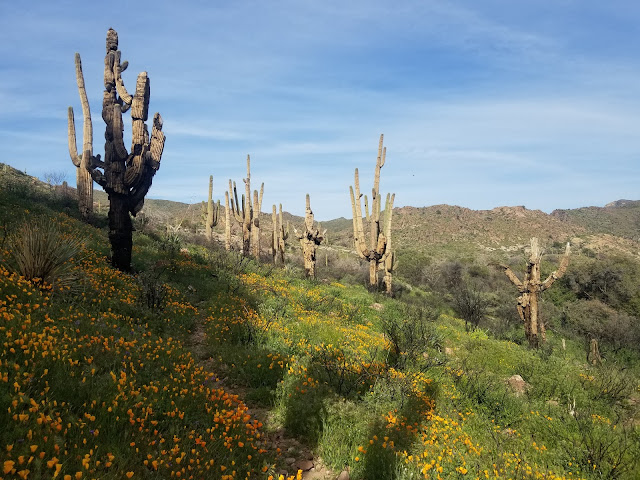