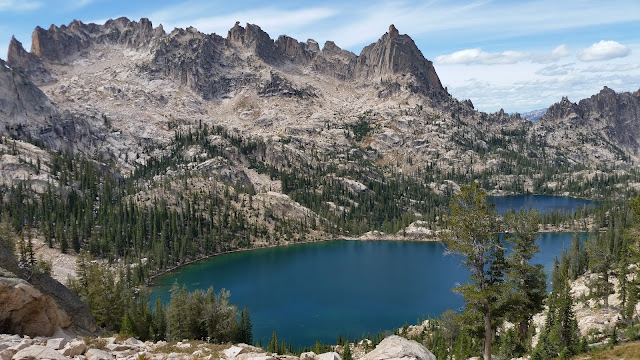 Many of us are sick of talking, thinking, and worrying about the elephant in the room. So let's distract ourselves briefly with five blasts from the past - five vignettes of trail life. 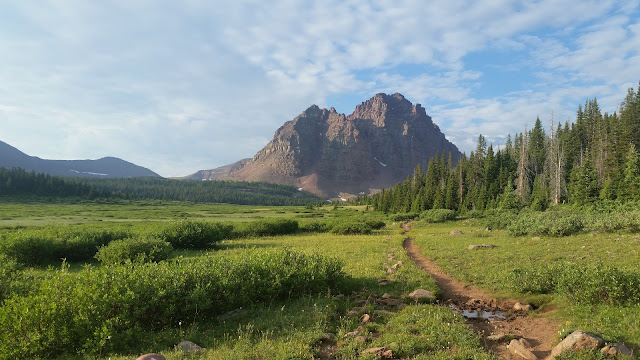 The Uinta Mountains are known for their high, sweeping alpine terrain and long ridgelines thousands of feet above treeline. Technical or jagged terrain? Not so much. But Red Castle is an exception to this. Though it sits in the shadow of higher peaks, some soaring to more than 13,000 feet, Red Castle's distinctive shape makes it a popular backpacking destination.

I first visited Red Castle over the 4th of July a few years ago. I crossed several high passes, caught a fish or two in a few alpine lakes, and got really sunburned. And I climbed up a nearby peak to have a look at the area.

By the way, am I the only one who thinks that Upper Red Castle Lake looks like a toilet seat? 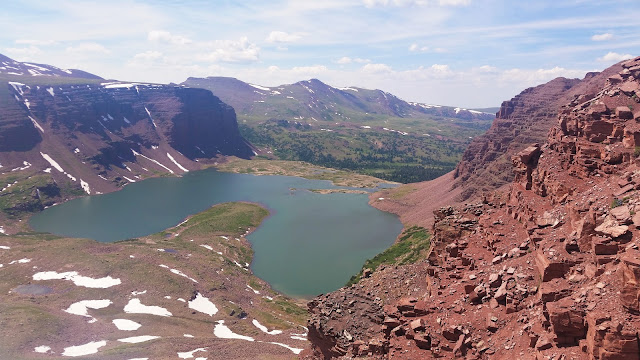 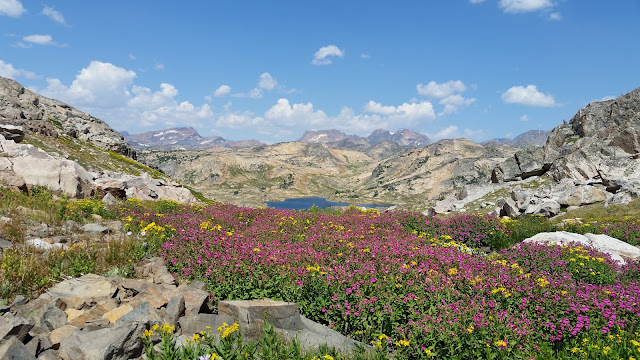 Names sometimes say it all. In this neck of the woods, one could visit Iceberg Lake, the Snowball Lakes, Cold Lake, Avalanche Lake, and my personal favorite, Froze-to-Death Lake. The Beartooth Range isn't exactly the most hospitable of places. Snow hangs around until at least the end of July, and just days after this photo was taken in late August, a snowstorm moved through, dropping several feet of snow and closing Beartooth Highway for the winter.

Wildflowers in the Beartooths really need to make their summers count. In July and August, whole meadows bloom all at once in a tremendous display of color, as if a tornado ripped through a craft store. For those few weeks of glorious summer, there's no place I'd rather be. 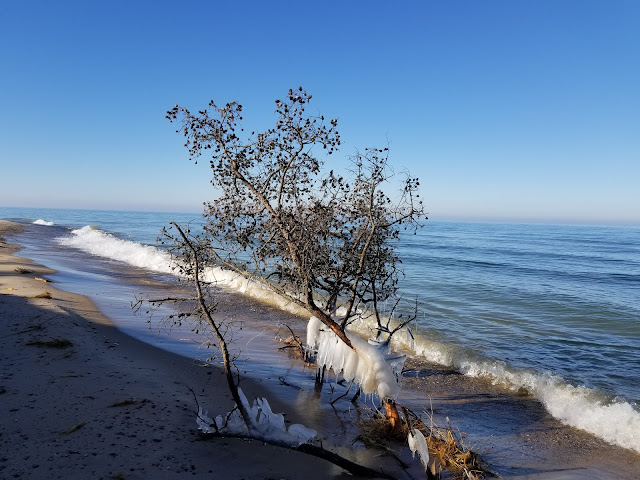 There aren't too many stretches of Lake Michigan shoreline that remain truly wild. This is one of them. We walked the beach for miles and saw nary a person. No passing speedboats, no overpriced houses perched on the dunes, not even a footprint. Visit here in the middle of winter and we're almost guaranteed to have the place to ourselves.

Except for this little piece of a driftwood. A drift-tree, really. It's a temporary visitor, deposited by the fabled gales of November. The next time the wind builds and the waves swell (tomorrow probably), our drift-tree friend will resume its journey to wherever-it's-going. Perhaps to Chicago or Milwaukee, or north to Traverse City. Summoning up ambition, perchance it can sail through the Straits of Mackinac, through Huron, Erie, and Ontario, and out into the North Atlantic. Someday. Maybe.

In the meantime though, we're glad it's honored us with its presence. We must admit - it looks rather dashing in its stylish ice skirt. 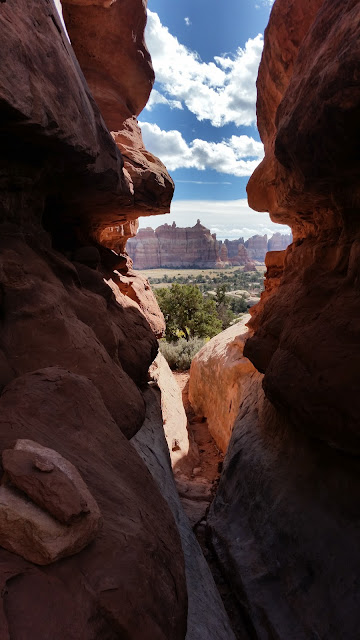 I've undoubtedly glanced at this photo more often than any other. That's because it serves as the lock screen on my phone. Every time I see it, I smile a little inside.

I snapped it a few years ago on a trip to Canyonlands with my sister. We did a three-day backpacking loop in in a popular and spectacular part of the park. I'd done a very similar loop a few years before and knew of a place where a series of overhung rocks provide excellent natural shelter - which came in handy when the weather started to deteriorate on day 2. We hiked quick, racing the incoming storm, and made it to the rock garden right as it started to rain. And good thing, too! It rained for hours and hours. We sat in our tents underneath the rocks, dry and cozy. Boredom gave way to word games, which gave way to more boredom. But it was sure better than walking all afternoon in the pouring rain.

Before the weather moved in though, I snapped a photo in the Chesler Park area between two of the famous "Needles" - tightly spaced hoodoos of striped sandstone. I will never tire of this view.

The end of a thru-hike is a funny thing. What was once months and thousands of miles away is now only weeks and hundreds of miles away. All of the sudden, you need to book your bus or plane ticket, and that means you need to figure out your finish date. For months, people have been asking you when you plan to finish, but you've always been vague about it. "Early September" has always been sufficient. But now you need a date. September 4. Take the miles remaining and divide it by your daily mileage. How many days is that? You check and double-check your math, making sure you're not being too aggressive with your itinerary. You add a couple of days, just to be safe. September 4. You're going to finish this trail on September 4.

You're in the best shape of your life, but your body is beat up. Uphills are effortless, yet you hobble around each morning, wincing with every step. You do 30 miles in less than 12 hours, crossing three alpine passes and gaining thousands of feet of elevation. For months, you've kept your daily mileage steady, never doing too much, always keeping a little in the tank for tomorrow. But your number of tomorrows on-trail is quickly dwindling. Time to let it all hang out.

The last few weeks seem like a dream. You develop tunnel vision: if it's not related to forward progress, to getting to that goal, it's just irrelevant. You sleep in weird places. You decide you really don't need to do laundry in this town. Your momentum gathers as you roll "downhill" toward your goal. Three hundred miles left. Three days later, it's two hundred. You start passing lasts: last resupply point, last developed campground. Last road crossing. Last full day on trail. Last night on trail.

None of it seems quite real. You can't comprehend not walking, not continuing forward. What do you mean, there is no forward to continue on? You're quickly approaching the edge of your world. Will you fall off?

The last day is a blur. You maintain three miles per hour on easy trail, and as you sense the end getting closer, three turns into three and a half. Three and a half probably turns to four, though you're certainly not clocking yourself.

Finally you see it. Flags flying. A clearcut in the woods. French on the border crossing sign. You're here. And you're not sure what you feel, or what you should feel. Mostly, you just want to continue north - north on a trail that doesn't exist. 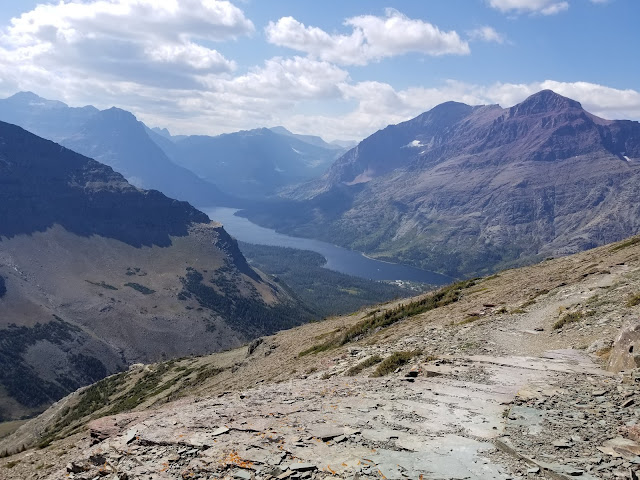