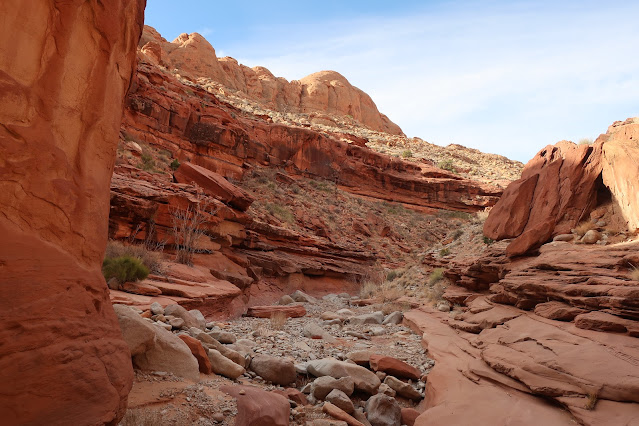 I'm no Luddite, but I must admit some misgivings about the ubiquity of technology in 21st-century life. When friends check their phones while we're hanging out, off in electronic la-la land, it bothers me. I'm not completely comfortable with the degree to which large tech companies can reconstruct our lives simply by snooping on our browsing habits, location data, and more. And, having just begun a job, bought a car, and signed a lease, I'm struck anew by how necessary - yes, necessary - it is to have an email address and access to electronic communication in the modern age.

Backcountry adventuring is not insulated from this broader societal trend. It's not a coincidence that the venerable Halfmile PCT maps are no more, "replaced" by an unjustifiably expensive set of Trails Illustrated maps. In reality, they've been replaced not by the TI maps, but by the Guthook PCT app, as well as the digital versions of those TI maps on Gaia GPS. Hikers who are increasingly steeped in a digital culture increasingly turn to digital resources to meet their navigational needs. We can rail against it all we want (and if you catch me in a offline/non-diplomatic moment, you may hear that screed), but like it or not, the tendency toward an all-digital navigational approach seems inexorable.

Navigation isn't the only area of the modern outdoor experience that's been digitized. In recent years, I've had more than few hikers tell me that it's dangerous - irresponsible, even - to not carry a personal Personal Locator Beacon (PLB) or similar satellite communicator in the backcountry. On one memorable occasion, a fellow CDT hiker chided me for not carrying a PLB. He told me that a PLB was required equipment, but a paper map was not. If his Guthook app failed, he could simply push his SPOT device and wait for rescue. This line of thinking is obviously terrible and a "special kind of stupid" - but unfortunately all too frequent.

I've owned a Personal Locator Beacon for 6 or 7 years now - long enough that I've had to renew its NOAA registration and really should have replaced the battery already. But in all that time, I've always treated it with a barely-restrained degree of contempt. I've regarded it as an intrusion on my life - an electronic "leash", as my friend Paul would say. I bring it only when there aren't any other options for rescue in case of injury - namely, when I'm hiking both (1) alone, and (2) off-trail. And the whole time, I grit my teeth and resent the fact that it's sitting in my hipbelt pocket, tying me to the outside world with invisible cords. I bring it mostly for my family's sake, and complain bitterly to myself about it.

But I think my (admitted bad) attitude is starting to change. Two incidents in the course of the past year have impacted my thinking:

1) In 2020, I was attacked by a grizzly bear. I was able to bandage up my wounds and hike out, but had things happened just slightly different, I would have needed SAR to rescue me. If the bear had slashed my leg instead of my chest, I wouldn't have been able to walk. If I hadn't been able to control the bleeding, I would have needed medical attention immediately in order to survive. I didn't need my PLB, but in any other scenario, I probably would have.

2) In 2021, I took a fall while hiking in a desert canyon and shattered a bone in my heel. Thankfully, it happened within a couple hundred yards of a paved highway, and I was able to crawl up to the road where a good Samaritan picked me up. Had the fall occurred anywhere else, I would have required rescue, as I couldn't walk at all. In this desert environment, an inability to move coupled with a lack of water sources could have led to a grim outcome.

I don't consider myself particularly accident-prone. I generally make fairly conservative decisions when it comes to risk in the outdoors. Put simply, I try to do everything within my power to ensure that I never have a medical emergency in the backcountry. And yet, accidents happen - twice in a year, in my case. Without a PLB, either of the scenarios could have proved fatal, had circumstances played out a bit differently.

What then, of the PLB? I'm beginning to appreciate it, rather than despise it. I turned 30 this year. The youthful illusion of invincibility is starting to wear off. And after my brushes with injury in the past year, it's tough to claim with a straight face that it "won't happen to me". And if it can happen to me, it can happen to anybody. It doesn't even need to be an injury - take a simple case of food poisoning in the backcountry. In deep wilderness, an inability to move can quickly become an inability to survive.

I've made my peace with the personal locator beacon. I may not love it, but I certainly don't hate it anymore. As part of my re-thinking of the PLB, here are a few key considerations I've dwelt on:

Not all emergency-use satellite communicators are created equal. I won't try to create a full buyer's guide here, but just sketch out some general categories. From simplest to most complex:

Which is the right device for you? Tough to say, as it depends on how many features you want, and whether you're willing to pay for them. I've carried a barebones PLB for years, as I wanted to be unable to communicate with the outside world except in dire emergencies - that is, I wanted my electronic leash to be as long as possible. But my experiences in the past year have taught me that there's quite a bit of gray area when it comes to urgent medical needs. Though I was in little danger of dying in the aftermath of either of my recent incidents, it would have been enormously helpful to be able to contact medical help without them assuming that I was in need of a full-blown chopper rescue. When I broke my foot, being able to contact the county sheriff and have a couple folks help me limp out would have saved me a truly excruciating hour of crawling on bloody hands and knees over boulders and up steep slopes - and it might have made the difference in preventing further injury.

On the other hand, I'd hate to shoulder an expectation that I'll contact friends or family (or work - shudder!) while I'm in the backcountry. Part of the reason we head into the wilderness is to put our ordinary daily concerns on the back burner. Would having a more advanced device - capable of check-ins or 2-way messaging - compromise the reason I was out there in the first place? To some extent, yes. But I'm starting to wonder if the compromise might be worth it. I'm not there yet, but I think my attitude might be changing.

All that said, it's possible that carrying a PLB doesn't actually make for a safer trip. Consider again the fellow who told me he was carrying a PLB instead of paper maps . Instead of learning the navigational skills needed to survive and thrive on the often-poorly-marked CDT, he was using the PLB as a crutch. The presence of a PLB was almost certainly making his trip less safe. If safety equipment (be it a PLB, avalanche airbag, climbing helmet, etc) emboldens us to take risks that we wouldn't ordinarily take, then that safety equipment is useless at best and counterproductive at worst.

The best safety equipment we have is our brains. It's not exactly a profundity to say that it's far better to avoid a dangerous situation than to be bailed out of it by our safety gear. I try not to let the presence - or absence - of a PLB impact my decision-making. If I'd be more comfortable navigating that sketchy arete in the rain with a PLB, that's my brain's way of telling me that I'm making a bad decision.

So, how do we convince skeptics (like me) to bring a PLB? So often, our arguments in favor of PLB's revolve around guilt and shame: "you're irresponsible for not bringing one", or "what will your family say?" To me, that's the wrong approach. These arguments only put someone on the defensive and further entrench an anti-PLB mindset.

To me, the best way to encourage the use of PLBs is instead a message of liberation: "A PLB increases your odds of a good outcome, if something bad happens to you". A PLB is relatively lightweight, relatively compact, and can be stashed in a hipbelt pocket (for easy access!) and forgotten about unless it's needed.

Folks who don't carry a PLB aren't generally irresponsible. They simply have a different assessment of the costs versus benefits of carrying one. I've got a lot of sympathy for that argument. I used to agree. But after having experienced a couple of backcountry accidents and seeing the the costs first-hand, I'm starting to re-think my cost/benefit analysis when it comes to PLBs. And hopefully my recent experiences will help others do the same.